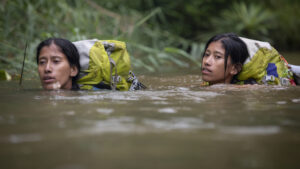 Record-breaking mountaineers Tashi and Nungshi Malik take on the World’s Toughest Race across Fiji to inspire young women in India and around the world to dream big.

At the age of 23, Twin sisters Tashi and Nungshi Malik became Guinness World Record holders as the youngest people (and the first twins) to complete the Explorers Grand Slam – climbing the world’s seven highest peaks including Everest and skiing to the North and South Poles. [Listen to the Podcast episode here.

This year, they pushed their comfort zones further by taking on the World’s Toughest Race, the Eco-Challenge across Fiji, as half of team Khukuri Warriors, the first team ever to represent India on the global stage. Khukuri is the traditional knife of Gurkhas made world-famous by the Gurkha soldiers. It symbolizes courage and valor. The twin sisters also represent a duality of regions within India, specifically their homes states of Haryana and Dehradun.

“If you don’t discriminate, if you don’t see the difference between a boy and a girl, if you just treat them equally, then you will have record-breaking daughters in your country.”

The non-stop race runs 24 hours a day and includes a plethora of disciplines, from mountain biking to paddle boarding, many of which the sisters had no previous experience in. “Ocean navigation was one of the most challenging obstacles for us as a team because we had never been out on the ocean, never had canoed together, never done paddling before, so there were things that we were quite anxious about. It was [also] the first time I was even getting to paddleboard. Obviously, we had no training in India, so we just went into the race knowing that we were going to pull it off. Which we did. It was not until the time that we were on the course that we realized we had as much potential within us as we did as a team.” [Listen to the Podcast episode here.]

Surpassing their own expectations on the 671 km course, the rookies finished the grueling 10-day racecourse in 36th place amongst 66 seasoned teams, many of which were forced to leave the course due to injury or failure to reach a checkpoint in time. “We came into the race actually imagining ourselves to be out in the first leg, which was the ocean leg.” However, they received intermittent motivational support from this year’s race host Bear Grylls.

Relying on their mountaineering background, where they honed the ability to push on for hours without stopping, the Malik sisters overcame adversity such as running out of food and water, hypothermic waters, and tongue blisters. “When you fall on the ground with absolutely no means of moving, that’s when you quit, until then, whether it’s blisters or teary eyes, you just keep going.”

Although Tashi and Nungshi have already seen much of the world at a young age, they were blown away by the people and landscapes of Fiji. “Fiji is a nation which is abundantly blessed with both natural beauty and its biggest treasure, which is the native iTaukei people with their generous, welcoming hospitality and spontaneous laughter. The people that we met during the race, they had so little, yet they were willing to share so much. Fiji’s soul rests in its villages and shines through its timeless traditions.”

Since completing the race, the Malik sisters have received thousands of messages from people they’ve never met who appreciated the way they represented India, especially for going out of comfort zone and trying to do something different, something out of their own choice, rather than what they are forced to do. “We were guided by a bigger energy around us, and we give all the credit to that.”

Building on their revelations from overcoming challenges and adversity while climbing around the world, Tashi and Nungshi further proved that women, not just in India, can do anything. “This journey essentially is a message to the people of our country that girls can do anything if they are provided the right enabling environment. If you give them the opportunity, they are as good as boys and in some cases even better than them. So don’t limit them by saying that certain things are not meant for them, because dreams are not contingent upon sex. Dreaming is free.”

Read next on TOJ: Hiking 100 miles on the Camino de Santiago with my 7-month old daughter

Tashi and Nungshi were supported along the race by their father, a former officer in the Indian Army. “I feel like what he did with his words of wisdom really helped us during the course.” Although they wished his cooking skills were better, they knew that he was the one person that they could unload their frustrations and stresses with. “His performance benchmarks are very high and his mere presence on this circuit was definitely catalytic. There’s no denying that. Mentally he really kept all of us together.”

“Fiji’s soul rests in its villages and shines through its timeless traditions.”

In 2015, the Malik sisters established the NunghsiTashi Foundation to advance the lives of Indian Girls and Women through the outdoors. Their climbs shed light on the “daily mountains” being faced by millions of Indian girls, especially in villages, who face gender discrimination, exclusion and denial of basic rights on an epidemic level.

In this episode of The Outdoor Journal Podcast, “Nash and Tash” discuss how they overcame their lack of experience in many of the disciplines such as open ocean paddling, the surprise of their rare encounter with eco-challenge host Bear Grylls, their most precious piece of gear and how they improvised on the course, and how they became empowered to inspire women from restrictive cultures around the world to dream big. [Listen to the Podcast episode here.]

You can watch Tashi and Nungshi compete on the 10-episode series Eco-Challenge Fiji, streaming on Amazon Prime Video – 66 teams from 30 countries racing non-stop for 11 days across 671 kilometers of inhospitable terrain.