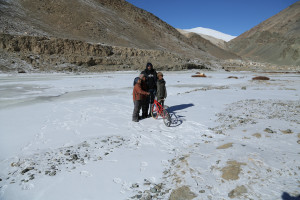 A 600-km road trip along the heavily militarized high-altitude desert region of Ladakh in Jammu and Kashmir during peak winter is the only way to see India's biggest frozen lakes and understand the life of the mountain folk dwelling by its picture perfect banks.

Ladakh’s winter is a daily struggle for survival in sub zero conditions by icy lakes and towering mountains, living without tap water for half the year, accepting electricity as a 3-hour daily phenomenon and relinquishing fresh green vegetables for the entire cold period. In addition to these natural hardships is the fact that Ladakh is also under the constant vigil of the Indian armed forces with China just a few kilometers away.

Padma Zorba knows all of this too well.

Just before daylight, she emerges from the flimsy brick and tin building that bears a board reading ‘Padma Home-stay’. Even in the dim light, the whiteness — fresh snow on the trans-Himalayan peaks and ice on the floor — makes the eye squint.

This is Chumatang town in the northeast of Ladakh (land of high passes). It is 140 kms from the capital city of Leh and far from any form of luxury or urban comfort. It is early January and rivulets of the Indus (Sindhu) River that flow close to the home-stay are sheets of ice and glassy in appearance.

(The thermometer nailed to the wall of ‘Padma Guest House reads’ -10 degrees Celsius. Padma is wrapped in a blanket to shield herself from the frigid gust. And the whipping noise of the Buddhist prayer flags indicates the wind speed would be nearly 25 kmph. Her blanket makes her walk in shuffles while she moves towards a small vertical structure marked ‘Toilet’.

Enroute, she adjusts her eyesight and peers at the oil lamp burning inside the family temple, five feet from the homestay. “Jhulley (the local greeting) Sindhujee ki kripa se diya jal raja hai,” (…by blessings of Indus River my lamp is still alit in this breeze) she says before rushing inside.

Moreover, a big chunk of the mighty river that nurtured the Indus Valley Civilization in North West India and Pakistan centuries ago continues to be a key provider for nomads, civilians and defense personnel alike in this desert. Chumatang falls in the Changtang region, which is a high-altitude plateau in western and northern Tibet extending into southeastern Ladakh via vast highlands and giant lakes. The nomadic people (Changpa), who graze goats and yak even in the impersonal and prolonged cold, are some of the most outstanding features of the region.

It is the peak of winter and 44-year-old Padma has decided to stay back in these arduous conditions to run the home-stay and make some extra money for the education of her children. Their relatives, on the other hand, have migrated to their city homes to live in more hospitable conditions till March.

“No one comes here in winter. It is very tough on us too despite being born in this region. The chores are double; there is no running water in the taps. It has to be either fetched from far away hand pumps that haven’t frozen yet or we melt ice and use it for daily use,” says Padma while brewing tea.

Her two school-going daughters Poonam and Sheeba help out at the provision shop adjacent to the home-stay. The shop is among the three in the village that supply toiletries, snacks and day to day provisions to the locals and to the Indian defense personnel who are posted selectively along this heavily militarized route, given its prominence due to its adjacency to China occupied parts of Tibet.

After the winter vacation is over Padma is looking to send her elder daughter to a Tibetan school in Leh where education is better and hotel facilities will keep them away from the numbing conditions of her hometown. Her husband Zorba has been wheezing for a few days now but that does not stop him from ensuring the family car, which doubles up as a taxi, is ready for a trip in the morning. For that, under the given weather conditions in winter, Zorba keeps the engine on almost all night to prevent the diesel from freezing. A gunny sack covers the engine area from ice formation, which happens in less than 10 minutes.

The downside of this method is the night-long, sleep-wrecking hum of the engine one has to put up with in an otherwise quiet countryside. If the acute mountain sickness (AMS) has not given you a headache yet, the constant hum of the vehicle engine might.

“Beautiful. Isn’t she?…The ice sheet on the river gives us water during the summers and during the winter, you can stand on her with confidence” says Zorba standing almost midway on the icy rivulet. He stares at his herd of sheep and the few domestic kiangs (Tibetan wild ass, Kiang Equus kiang) that are grazing on the sparse grass left with their feet firmly on the glassy surface. The hot spring huts are closed during winter and the treatment center is a baffling sight of non-stop smoke rising from the ground. Vapor emanates from the boiling springs that kisses the thick sheet of ice of the frozen rivulet- the sight and smell making the surroundings surreal and sulphur-stenched. The absence of patients queuing for a cure to their ailment in winter season does not make the bubbling hot spring useless. The Zorbas use the natural spring water to thaw the frozen pipes in the bathroom for guests..

“The oil heating system in the guest room and Zorba’s dining area is a welcome change for us. Last time a bukhari (traditional hearth) fueled by kerosene and animal dung kept us alive. Even layers of blankets can’t keep the chill away in this region,” says Nitin Gera, a travel photographer from Delhi who is respectfully aware of the hardships of life in this region through his past six trips. Of this, four have been in the extreme wintertime.

The dining room has an additional insulation layer in the form of a silver foil like paper running through the roof from the interiors, almost similar to the technology used in 21st century thermal wear using Omniheat Reflective technology made by Columbia, the outdoor apparel maker. The interior of the home-stay rooms has no such insulation. It is bare save the wooden beds and blankets and a recently purchased oil heater. The cost of staying, because tariff is hardly a word to use, is ridiculously cheap for the ethereal setting that Chumatang provides. An overnight stay is accompanied by almost endless cups of tea, a meal of dal (lentil), roti (Indian bread) and some vegetable costing not more than Rs 1500 / (USD20) per person.

A new vehicle out of the Tata motors stable ‘Aria’ was our chariot for the icy roads ahead in the journey, of which Chumatang was the first stop after leaving comforts far behind in Leh. The roads in most parts of Ladakh are in impeccable condition, almost unreal for Indian standards, precisely why the Border Roads Organisation (BRO) is a very respected agency in this region. The Tata Aria floats effortlessly over the thin pothole free strip of tarmac road till it takes a detour at an army- guarded bridge at Mahe checkpoint. Written inner-line permits from the Ladakh district administration are imperative and non-Indians are not allowed beyond this point since it is close to the Line of Actual Control (LAC) — a cease-fire line that separates the Indian controlled parts of Jammu and Kashmir from the Chinese-controlled area known as Aksai Chin.

Danger and adventure is an everyday chore

Ladakh lies above the tree line and after endless rows of barren hills, a frozen waterbody appears and at a distance are three kids cycling on it. Karma, Karma and Karma (three friends with the same name) have a domestic task in hand for which they are outdoors on a small frozen lake named Kyagartso. Their task involves fetching water from a water pump and provisions from a store they cycle on an ice sheet about four inches thick with an aluminum canister. “We cycle on this river for about five kms everyday to fetch water in winters. We have to do so that there is water at home,” the 10-year-old boys say in unison, oblivious to the fact that they perform an extremely dangerous task at such a young age. Though a daily route, the ice is not certified stable and can crack due to excess weight any day, as was the case with a youth who fell in the frigid water and died while ice-skating on the frozen Pangong Lake last year.

The courage to emulate them rose from the confidence of being an athlete. But this was less of sport and more of a burning desire to try extreme cycling on a bicycle that had a handlebar with a mind of its own and the seat pointed skyward. But, if the kids were cycling with ease, how hard could it be! After a thorough inspection of the ice sheet and praying it wouldn’t break under a grown-up’s weight, the first step was to precariously push down the pedals while avoiding to slip and yet trying to get some momentum. Simple in theory but a rather tough task on glacial surface. After a few clumsy slips and nearly kissing the frozen lake in a fall, the cycle behaves as it should and slowly glides on the surface. It’s easy to get lost in the blend of blue and white color of the ice sheet but the subtle ‘krrrrack’ noise that follows the bicycle is enough to motivate one to make haste to the lake bed and hand over the clapped-out bicycle to the three Karmas before heading to the high-altitude Tso Moriri Lake.

The way beyond this point was of the kind that would please protagonists of the TV series ‘Ice road trucker”. The driver, a Ladakhi named Sampel (nicknamed Simple) was just like an ice-road trucker with knowledge of the terrain well ingrained in his head and experience to handle it in his hands. After the vehicle survived climbing a high pass slipping and skidding on ice and snow, the diesel froze even as the engine was running. Despite the noon sun, the car thermometer showed the temperature outside as -23 degrees C. Soon enough, the car surrendered to a halt. A seasoned driver in this region is one who will not panic in such situations and his buddy for such critical moments is always in the boot.

He’ll used a kerosene stove to heat up the engine from below, while pouring hot water on the radiator. A few kilometres before the lake, an army convoy was doing the same to revive their ‘Stallion’ vehicle, a powerful 6×6 built to withstand temperatures ranging from -35 to + 55 degrees C……. to be continued.