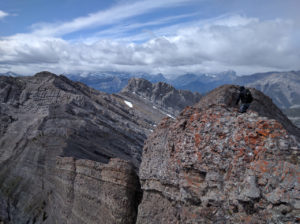 Between traveling to mountain ranges around the world, a climbing enthusiast explores the rock in his own backyard - and tries to keep his feet intact.

Looking west from my parent’s house, on a good day, the Canadian Rockies form a small snowy and rocky barrier between the endless Alberta blue sky and the sea of different shades of brown of the prairies.

I have spent my too few and precious days traveling, standing in the shadows of some of the worlds great ranges; the Andes in Peru, the Southern Alps in New Zealand, the Alps in Europe, the Himalaya in Nepal and India, and the North American Rockies.

Only after traveling to ranges around the world did I start to consider what the Rockies offered vs other ranges.

The glaciers from the last ice age carved large valleys through the Rockies, making them relatively accessible. The weather in the mountains is grim and Canada has more space than anyone could use, leaving the Rockies pretty empty of people.

And being empty of people leaves the Canadian Rockies empty of the mountain facilities of other ranges. Things like herder huts, tea houses, Swiss chalets, tramping huts, Nepalese bakeries and climbing huts are few and far between.

In the Rockies a well-marked and easy to find trail is a rare and prized thing, as most times the way to the trailhead involves finding a deer trail 14.2km after the last creek which may or may not be currently dry.

I’m a little torn. Facilities and marked trails make the logistics of a trip to the mountains easier. It’s easier to just pack a bag and go. In the Rockies, trip planning usually involves pouring over maps and combing the internet for clues for finding the damn trail head.

On the other hand, better facilities and marked trails are a sign that there are more people in the mountains and the better development will attract even more people. Unfortunately, I’m a little selfish and like to keep the mountains to myself and my party. I also like the adventure and commitment needed in the Rockies.

On either side of the Bow Valley, two of these very rocky mountains, guard the gateway to the Canadian Rockies.

Flanking the Bow Valley, Prairie View Mountain and Mount Yamnuska mark the (highly unofficial) Eastern boundary of the Canadian Rockies along the Bow. Clever surveyors took advantage of the flat wide valley left by the Bow River and the glacier that came before it to set a path into the Rockies by train or car. Here the dullness of the Canadian Prairie landscape and lifestyle gives way to the mountains and the many options for death (rocks, snow, bears) you can have fun narrowly avoiding.

Sitting between those two frequently and easily visited peaks, sits a wall of rock which I have gazed up at 100s of times while driving deeper into the mountains.

As it happens I haven’t been the only one staring up at the wall of rock. One day Keegan, my brother, suggested we climb up the Southern edge of the ridge sitting on top of the ‘wall of rock’ and see how far we could get.

Turns out we could not get so far. The first peak, while passing several groups of foreign tourists? Easy enough. The second peak, while moving surprisingly easily up steep limestone slab? Was great. 3rd peak with loose rocks, steeper limestone slab, and some real exposure? It’s getting a little late, and hey, that cloud, it could rain! Also, aren’t we supposed to be meeting someone for drinks right about now? Better head down.

After doing some research (sure, most people do this BEFORE going up some mountains) we learned we had failed an attempt on Goat Ridge Traverse. We also figured out a way for us to complete the traverse.

Mountains on the Eastern edge of the Rockies are happily provided with a hair-dryerisk climate making the mountains there easy early season targets as the warm winds blow or melt off any snow long before any mountains further west lose their sparkling white shrouds.  The Goat Ridge Traverse is often used as a low commitment and relatively easy warm-up climb for real mountaineers.

The key thing here is climb. A successful traverse would require a rope, some hardware, sure feet, good weather, and some mountain skills.

The climb itself is described as a scramble with climbing sections that go to 5.3 on the Yosemite scale. The traverse goes up 1100m, covers 10km and crosses (depending on who on the internet you listen to) 6 to 9 peaks including Loder Peak, Door Jam Peak, and Goat Mountain. The expected time for completion is 9-14 hours.

For the second attempt, we approached it from the other direction (North to South) as apparently, it was easier.

This time, we were mostly ready. The weather was good, we had a rope,  and we had food for a 10h adventure. The only thing we lacked was an abundance of mountain skills, but hey, no time better to learn right?

The approach went up the South side of Mount Yamnuska, following a well-used trail used by climbers for approaching the climbs on ‘Yam’. After that, it was time for helmets, harnesses and the start of the traverse.

Looking back the very start was probably the sketchiest. Kinda had to scramble up the side of this ridge. It was steep, the rock was loose and if you fell you’d probably have time to realize you are falling, to curse yourself for being stupid enough for falling, and to wonder if you picked the right god and what happens if you picked the wrong one.

Once on top, the scrambling was very nice. Grippy rock, pretty views of mountains, and shocking views of the valley below. Better watch your feet!

It turned out our mountain skills were more than adequate as most of the rock we felt comfortable ‘soloing up’ (no rope or protection) and areas requiring roping up, were easy to protect.

The tops of the Rockies are predominantly limestone and the Goat Ridge Traverse was no different. We spent the majority of the 10 hours of the traverse on slabby, grippy limestone. It is hard to appreciate what a pleasure climbing on this stone was. The level of traction provided to your shoes, even at quite a steep grade, was almost enough to stop you from worrying about the ever present (and persistent) west wind pushing  you towards the precipice.

Okay. Everyone was not happy with the rock. Especially as the day lingered by, my feet were complaining. Was it the 10 hours on hard rock, the fact that I was wearing barefoot runners, that I had run a 50km ultra marathon on pavement 4 days earlier, or my feet are as whiney as soccer (er football) players? Not sure, but my unhappy feet made walking a little challenging for the days that followed.

It was a successful day and a nice goodbye to the Rockies. A few short sleeps after the traverse I was again on a plane off to look at some other mountains. My feet still don’t miss them, but I know I will be back.