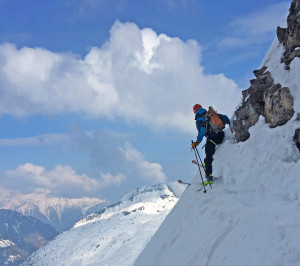 Oufissime! said my mate Adelin, looking at the face we had just skied a few minutes ago. From the bottom it looked like a more interesting climbing route than a face you would ski down from.

I was captured by this face three years ago when I skied down a nice line on the south face of Le Luisin (2786m), part of Chablais Alps in Valais, Switzerland. I was sure it was possible to ski a direct and more beautiful line as the classic one in this Tour Salliere (3220m), north face. Many good skiers such as Christoph Jacquerod, Mika Merikanto, Francois Labande have passed by and tried different things but this line was still waiting to be discovered.

Since the beginning of this winter I have been wanting to ski a line with my mate Adelin Favre, a super strong skier and a great guy with whom I had an epic time at Tournier Spur last summer (read about it in the latest issue of The Outdoor Journal). So the Tour Salliere was our Saturday objective.

Experimenting with a new chili pepper the evening before, I couldn’t sleep and had stomach cramps all night. I was still weak the next day but pushed myself to move and after downing several litres of Coca Cola I finally met Adelin at our meeting point – the Swiss village of Les Marecottes.

Adelin was charged up, I felt bad to be the dead weight of the trip. We slowly arrived to the bergschrund. An ice fall coming from the upper serac welcomed us, we jump into the bergschrund to protect ourselves. We decided to keep going, and were exposed to the seracs in the first fifty meters, after which our route disappeared.

A fifty meter race began, a true Ueli Steck experience, and propulsed by last evening’s pepper, I took breaths like a whale blowing air. We climbed in inconsistent snow on a beautiful, still sun-exposed spur, came across the easy cross snowfield, and then the moment of doubt – crossing an exposed ramp!

Adelin was breaking the tracks and quickly passed all cones, I could see him at the end of the traverse, and was super happy, the mountain offered us a great way! After this exposed but magnificent moment we took a little break and drink. Adelin took pity on me and wanted to carry my skis, but I kept my dignity and kept going with all my stuff.
To take the classic line we decided to take a straight narrow couloir, which becomes a gulotte after 50m, then we joined the last snow field before the top ridge, and decided to stop some meters below so as to not annoy the snow bridge gods.

I ate all the sugar I could to desperately try to fix my head and stomach plus to give it a bit more power for the hard mission ahead. The first turns were easy and made me more confident, then we abseiled a fifty meter section.
Adelin told me that he had never placed a piton before, so it was my turn to take over the game. Then came the exposed ramp. I could hardly believe that we could ski here. The entrance was steep and the snow was hard. I didn’t have to do a long one to touch the slope with my hand.
With an ice axe in the upper hand we crossed slowly but it wasn’t the nightmare I had imagined. The rest of the downhill was pure happiness in good snow with a great view. At the bottom we decided to take a more direct way. This option demanded us to down climb several meters, but protected us from seracs.
And then it’s done, finished, a fantasy has been realized. I have a bit of difficulty to believe it was real. Adelin was showing his happiness and let out an “enorme!”, a “geant!” and an “oufissime!”.
In a wild place in Switzerland, far away from crowd, just two friends, this was the story of our Saturday on the shoulder of the Tour Salliere north face.
Text and images: Sébastian de Saint Marie
About the author: Skier and alpinist, Sébastien has carried out first ski descents in the Alps, Chablais and Aiguilles Rouges. He made the first ski descent of “Brenvitudes” on the Brenva side of Mont Blanc as well as off the south face of Shishapangma (Tibet) from an altitude of 7,400m.