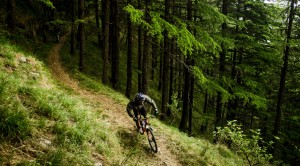 When we asked mountain biker and organiser of MTB Himalaya race Ashish Sood to list out five best mountain biking destinations in India, he stung back saying that given the country's diversity it was criminal to restrict himself to just five places.

1) natural surroundings of the place

4) ease of getting to that place

When you take this route, you cross two of the highest motorable passes in the world – Khardung La as well as Marsimek La. That’s not the best part of this ride though – the natural beauty of this region is unparalleled. Nestled between mountain ranges on both sides of Nubra valley is nature’s breathtaking beauty. It has snow peaks, a flowing river and sand dunes all at the same place. The region is at an average altitude of 3200 m above sea level, the locals are friendly and there are ample accommodation options available if you go towards Diskit . The loop towards Pangong is  remote and it is advised that you have a local guy.

Western Ghats and the Konkan Coast

The western ghats are among the oldest mountains in India . These rustic and unchartered mountains are as romantic as a ride can get . Starting from Mumbai there are a plethora of options you can explore. Head towards Kashid and the beaches close to Pune , Sinhagad or head south towards Ratnagiri districts. Dapoli and the beaches near-by are to die for. Anjarle in particular is my favourite. From there you can head towards the forests of Karnataka or the cosmopolitan Goa. From the confluence of cultures in Goa to the old world charm of Malgudi days – the Ghats have it all.

Regarded by many as the Mecca of high altitude biking, this route sees riders from across the world experience the mighty Himalaya. The highlight is of course, the fact that you cross multiple 4000+ m passes – The Tanglang La being the trickiest on this route. The most beautiful part of this route however is the section from Srinagar till you cross Sonamarg and Zoji La pass and enter into Ladakh. Similar beauty awaits you when you enter from the other side as you cross the breathtaking mountains of Marhi, the deadly Rohtang and the unbelievably beautiful More Plains. There are options to divert yourself to one of the glacial lakes at Chandertaal, Suraj Taal, Tso Moriri or even Pangong. Other higher passes lurk around the region, maybe a local army person will tell you about them over a cup of tea. You are for most part riding along gushing rivers cutting through rocks in between higher peaks.

If Manali – Leh – Srinagar is close to heaven, this is pretty much there too! Spiti is just like Leh, only much better – no traffic, less people. The best place to start this tour is from Shimla or Narkanda and head towards Bhimakali Sarahan. A stay at the temple is highly recommended. From here, head towards Spiti Valley. The highest pass of the region is Kunzum, again a tricky pass but worth the effort. You head towards Chandertaal from here and a night’s stay at Chandertaal.

From Chandertaal you get to Manali and ride from Manali towards Mandi. From Mandi you head towards Barot , a beautiful town nestled in pine trees and home to fresh water trout. It is the oldest hydel power project in Asia. From here you head towards Billing – the route will take you through the Dhauladhars with Bara Banghal range on the other side. Billing is also home to the Paragliding World Cup this year.

From here you tail on the tea gardens of Palampur and cross over to Dalai Lama’s abode in Dharamshala. The 15-day tour from Sarahan to Dharamshala has a very spiritual touch to it. The famous monasteries of Spiti (Key, Dhankar Gompa), the temples at Bhimakali Sarahan and Hidamba at Manali and the Dalai Lama who owns the place in Dharamshala are a cultural treat in the lap of Himalayas. This trip will stay with you till you live.

Tall pines, fairy tale meadows, crystal clear rivers – that’s what defines this part of the world – one of the most prosperous belts of India. This land is blessed by evergreen forests, apple orchards, country roads through some breath-taking terrain and the best people you are ever likely to come across. The areas of Shimla/ Kotgarh/Jalori are blessed by nature in every way. The British found a second home in these parts of the world and had developed some really difficult engineering feats which are now popular roads and routes. What sets this region apart from anywhere else is the availability of routes which have no traffic and are cyclists’ paradise. The routes are tough and at the same time drop dead gorgeous. These parts are also home to one of the toughest MTB races of the world and the oldest MTB – XC race in Asian Region – MTB Himalaya. Enough places to stay and eat area available.

Ashish Sood is director at MTB Himalaya and  currently handles marketing and strategy at HASTPA (Himalayan Adventure Sports and Tourism Promotion Association), the body behind India’s oldest MTB race – MTB Himalaya. He has previously worked with the US State department of education, taught immigrant students, did some procurement risk management for Hewlett Packard. An active sportsperson, he loves football.