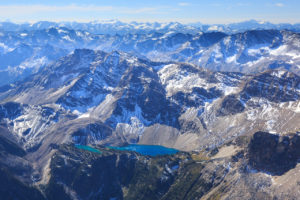 A Golden Opportunity: Adventuring in one of British Columbia’s Hidden Gems

Golden is a small town tucked away in Canada's spectacularly beautiful British Columbia.

It is a quiet and unassuming place, but on a recent visit we learned that everything in Golden—from rafting, to skydiving, to skiing to paragliding—is a little more extreme…

Looking out the left window of the little Cessna, I saw the Canadian Rockies; peering out the right, I saw the Columbia Mountains; and below the belly of the plane, the Columbia River Valley, a verdant artery wedged between the snow-capped peaks all around, meandered here and there.

Absolutely beautiful. So why was I about to jump out of that little Cessna? Why not just relax and appreciate the view?

“Ready?” Myles, the owner of Extreme Yeti Skydiving and my guide for the day, shouted in my ear? We scooted our butts forward over the floor of the plane until our legs dangled out the open door.

“Here goes nothing,” I thought…

Golden, a small town of 4,000 people (8,000 when the outskirts are included) in British Columbia, came by its name as a means of one-upping one of its neighbors, Silver City. Sitting at about 800 meters above sea level, the air is sweet and crisp and fresh.

Assuming one flies into Alberta’s Calgary airport, getting to Golden is marginally more arduous than getting to the easily accessible Banff. But the juice is worth the squeeze. Three hours down Canada’s Highway 1, the pitch of the cliffs lining the Columbia River Valley lessens, the towns become a little quainter, and everything—colors, angles, hustle-and-bustle—softens a bit.

At about this point you reach Golden. It has an old mining-town feel. Old freighters rumble through town below the serrated ridge lines on either side. Walking down the street, you get the feeling that everyone knows everyone. The river (The Kicking Horse or the Columbia, depending on whether you’re above the junction or not) and the beer (more than likely one of Whitetooth Brewing Company’s eminently quaffable creations, like the Psychosis 7 Double IPA or the Icefields Belgian-Inspired Pale ale) flow gently and plentifully.

Peaceful diversions abound. You can visit the local Grizzly Bear Refuge and its lone inhabitant, Boo Grizzly, liable to be shucking his corn or biting into a yam in his massive outdoor enclosure. Wetlands tours offer spectacular opportunities for bird watching. The Blaeberry Valley, just a short drive from town, offers solitude and educational experiences at the Northern Lights Wildlife Wolf Center.

But the town, welcoming, unthreatening and mild-mannered as it is, belies the adventure brimming from nearly every corner of the valley…

“Everything in Golden is a little more extreme,” Andy Brown of Tourism Golden tells me right before I head off for a day of rafting on the Kicking Horse River.

The mood at Glacier Raft Company’s headquarters perched above town is decidedly mellow and easygoing, but once on the river, things ramp up real fast.

I found myself in a raft with an Australian and a few young Canadians from further East. Our raft guide was Mike Reeder, a consummate whitewater kayaker with Samson-like curls atop his scruffy, permanently sunglassed face. He regaled us with stories of rafts flipping in massive rapids with names like “The Monster” and “G-Spot.”

The Kicking Horse River got it’s name in 1858 when James Hector, part of an expedition to explore possible routes for extending the Canadian-Pacific Railway through the mountains, was kicked by his horse. The blow knocked him unconscious, and broke several of his ribs, but he remained on dry land.

But on our raft trip, the Aussie bloke was catapulted out of the boat in a choppy section of river and went for an unexpected swim. As the raft reared backwards, probably not unlike Hector’s Horse, the Aussie flipped forwards over the front. The water roiling around him, myself and another of the Canadians pulled him in, falling backwards into the boat with him on top of us. Everyone safe and sound, our crew let loose howls and relieved laughter.

Though the river was too high to try it that day, Glacier Raft Company also runs heli-rafting adventures. The Kicking Horse River has three sections: the lower, middle and upper. The lower portion is only accessible by helicopter, and has the biggest white water around, including four kilometers of unrelenting Class 4 rapids. On the heli-rafting trips, participants crowd into a chopper and descend into the depths of the lower Kicking Horse.

Before that day I didn’t even know heli-rafting was a thing. “A little more extreme” indeed.

The mountains on either side of Golden are where you’ll find the highest concentration of thrill-seekers. On the Rockies’ side, Mount 7—so named for the perfect caligraphic “7” that melting snow creates near the summit each year—has a camouflaged network of elite mountain biking trails, and a bald patch up top that has a notable place in paragliding history.

On June 2, 1986, Randy Haney launched his hang glider from atop Mount 7 and flew 325 kilometers to Whitefish, Montana, setting a world record for flight distance. Most paragliders and hang gliders up on Mount 7 these days are content to ride the updrafts closer to home, but still have access to one of the best launches in North America.

Across from Mount 7 is Kicking Horse Mountain Resort, Golden’s crown jewel. The ski resort boasts over 100 trails and plenty of opportunity for off-piste adventures. The Golden Eagle Express gondola brings skiers and riders up to the summit at 2,450 meters. The vertical drop from top to bottom is among the largest in North America, measuring 1,260 meters. With Revelstoke, another ski resort with a massive vertical drop, just down the road, and fewer crowds than mountains like Jackson Hole or Whistler, Kicking Horse is an ideal place for a ski getaway.

To really squeeze every last drop out of Golden’s adventurous offerings, the shoulder seasons are the best time to visit. Spring and Fall are the times of year when you can be a triple threat—ski in the morning, paraglide in the afternoon, and mountain bike deep into the evening under a sun that doesn’t set until after 9 p.m.

Plummeting through the chill spring air, in nothing but a shorts and t-shirt, the wind rippled my cheeks like they were the surface of a pond.

Jumping out of that Cessna was effing exhilarating. Freefalling for nearly a minute, I couldn’t stop swearing with glee, unable to get over the novelty of weightlessness.  From that height, the mountains seemed no more than braille across the landscape, illegible to me but clearly containing a message of great import.

When the parachute deployed, we were no longer falling, but flying. I could see towards the national parks of Banff, Yoho, Glacier, Jasper and Kootenay. I could see the warehouse-like building of Whitetooth Brewing Company. I could pick out Golden’s main street with shops like Bacchus Books and Cafe, and I could see the Kicking Horse Pedestrian Bridge.

The opportunity to visit Golden was, well, golden. Coming back to earth, I couldn’t help but think of all the other adventures I’d like to have there: climbing in the Bugaboos, skiing Kicking Horse, dog sledding, fat biking… the list goes on and on.

I don’t know when it’ll be, but I’m sure I’ll return to Golden sooner or later. I liked having a little more extreme in my life.

Thanks to Tourism Golden, Glacier Raft Company, Extreme Yeti Skydiving, and all of Golden’s various other establishments. Feature image courtesy of Tourism Golden.