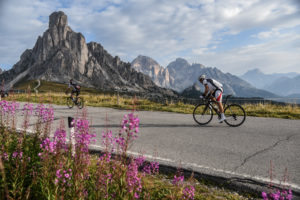 OC Sport, the owner and organiser of the Haute Route Series recently announced the renewal of its partnership with global diabetes charity Team Type 1 Foundation (TT1).

TT1, a global charity based in the United States is dedicated to helping diabetes-affected children in the developing world. It has been the official charity partner of the Haute Route series since 2014 and will now work with the event for another five years up to 2021, the centenary of the discovery of insulin.

Over the past three years Haute Route riders and TT1 teams that have ridden in either the Haute Route Pyrenees, Alps or Dolomites have raised nearly $500,000.

This money has helped thousands of children with diabetes obtain life-saving access to insulin, glucose monitors and test strips. In Rwanda funds raised by Haute Route riders made it possible to purchase over one million glucose test strips in 2015 alone.

Phil Southerland, Chairman of TT1, said he hopes the renewed partnership with the Haute Route series which, in 2017, includes the inaugural Mavic Haute Route Rockies, will be even more successful.

“We have raised significant funding through our partnership with an event that challenges cyclists to their limits and we feel sure that through their hard work and generosity, we can go further,” he said.

“We owe a great debt to our Team Type 1 Haute Route cyclists and donors. They have proven to us what’s possible, and inspired us to think even bigger for the future. We are proud and honoured to have the next five years to work with the team to see how much hope and inspiration we can deliver together,” added Southerland who is set to ride the Mavic Haute Route Rockies himself.

Matt Holden, Chief Operating Officer of OC Sport said: “We are delighted to continue this association with an organisation that does such remarkable work in the developing world. Having riders representing the charity at each event has been a hugely rewarding and inspiring element of this partnership and we look forward to more Team Type 1 riders taking part over the next five years.”

Then, on September 2nd, Innsbruck will host the Haute Route Dolomites for the first time as riders set out on their seven-day adventure, arriving in Venice on September 8th.

NOTE: To enter any of the European Haute Route events, sign up here.

Details of all the 21 stages of the 2017 European Haute Route events will be announced in November. In keeping with the Haute Route’s unique proposition, they will include not only some of the most iconic cols in professional cycling but a number of lesser-known climbs that are equally challenging and beautiful.

All competitors will benefit from the Haute Route’s professional level of rider support on each of the seven timed and ranked stages throughout the three events in Europe and the Mavic Haute Route Rockies.

Don’t forget that registrations for the Mavic Haute Route Rockies are also open. Taking place from June 24th to 30th 2017 in Colorado, the final registration phase is already in effect as places are selling rapidly. Sign up here.