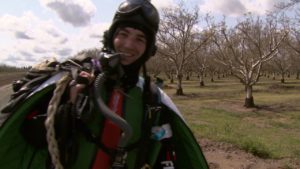 On a recent jump in California, three members of the Irish Wingsuit Team shattered existing world records for longest flight, both distance and time.

Jumping out of the aircraft from over 34,000 feet up, David Duffy, Stephen Duffy and Marc Daly used the jump as practice for an even bigger project, when they hope to wingsuit across the North Channel, from Ireland to Great Britain.

The Irish Wingsuit Team, a group of four wise-cracking thrill-seekers, flew into the record books at the beginning of this month. On April 9, in preparation for an even bigger, riskier flight, three of the team’s members—brothers Stephen and David Duffy, and Marc Daly—set new world records for both time and flight in Davis, California.

Their jump was a subproject of a larger goal still over a year away that the Team is calling The North Channel Crossing, in which they hope to fly their wingsuits from the North of Ireland to the UK. They will need to fly at least 21 kilometers to avoid splashing down in the water. “Us being Irish, the concept of this came over drinks in the pub, about three years ago nearly now,” Stephen Duffy told The Outdoor Journal. “We’ve been doing lots of subprojects working towards it.”

Their recent jump in Davis, CA was the biggest subproject yet. The Team decided it would behoove them to try a flight of at least 21 kilometers over land before they attempted it over water.

Duffy, Duffy, Daly and Des Reardon (the newest member of the team, who didn’t participate in the record-breaking jump), all have day-jobs: Stephen, 31, is an aircraft engineer and university lecturer; Marc Daly, 47, is self-employed; David Duffy, 30, is a Sales and Account Manager at a construction company; and Des Reardon, 31, is a “military man,” according to Stephen.

The three are also highly experienced skydivers and wingsuiters. “We all have over 1,000 jumps, and that includes 600 to 800 wingsuit jumps,” Stephen said.

The Duffys and Daly formed the Irish Wingsuit Team in 2011, and have been operating out of the Irish Parachute Club ever since. Since its founding, the team has represented Ireland at World Cup and World Championship events around the globe.

The high-altitude nature of the California jump posed a variety of problems and dangers for the guys. Temperature was perhaps their biggest fear: at the altitude from which they hoped to exit the plane, they estimated it would be roughly -55 degrees Celsius.

One of their sponsors—a company named Flexitog that designs and manufactures insulated wear for people working inside freezers—came to the rescue on the temperature front. According to Stephen, the guys at Flexitog said, “Guys, you’re all crazy…. What do you need?” and then outfitted them with compression skins, thermal layers and custom designed suits.

They also had to line up an aircraft and support crew that would support their high flying aspirations. The Irish national Airline, Aer Lingus, stepped up to the plate.

When the Team arrived in California, raring to go, they had to hurry up and wait. Stephen said, “We done what the Irish do: bring the bad weather with us.” After three straight days of thunderstorms, they finally had clear skies to test out their oxygen set-ups and cold-weather gear before the main event. Stephen, David and Marc did three prep jumps from 13,000 feet, 18,000 feet, and 24,000 feet. “The last one was our first record attempt,” Stephen said. “On that one, we broke the European Continental Time and Distance records for free fall.”

Feeling confident, they readied themselves for the “big day.”

“We had to pre-breathe 100% aviator’s oxygen for an hour before take-off,” Stephen said. “The idea of this is to push all the nitrogen out of our tissue,” to prevent the “bends” (decompression sickness, caused by changes in pressure, most commonly associated with divers).

Technical difficulties with the first aircraft led to the team deplaning and boarding a different one. Another hour of pre-breathing oxygen and everything was a go. The plane took off around 11:30 am and quickly climbed to 34,400 feet. Their predictions about temperature weren’t far of the mark: the thermometers registered -59 degrees Celsius.

“I went first, then Marc, then David,” said Stephen. “We flew a straight line from over the mountains and into the valley as far as possible.” After an exhilarating flight lasting nearly ten minutes, they each landed down in different spots, but Marc hit the jackpot. “Marc landed in a field right beside a guy who was loading up his RV and who provided him with cool, chilled beers,” Stephen recounted, laughing. “Only that man could find beer in the middle of the American countryside.”

When they got back to the drop-zone, they checked the results from their fly-sights (little GPS units that record all the statistical data from the flight), to see how they had done. “David flew the largest horizontal distance of us, at over 29 kilometers. If you take in the angle of descent, he flew 32 kilometers, and that’s known as absolute distance.”

Stephen flew 26.5 kilometers and Marc flew 25.5 kilometers. Though David went the farthest, Stephen spent more time in the air. “I was up there for 9 minutes 31.4 seconds. That’s a long time to be falling.”

The guys were chuffed: “We’ll need to do at least 21 kilometers to get across the Channel, and we learned we can do that,” Stephen said.

With the records and that confidence under their belts, they are now firmly focused on the North Channel Crossing jump. The tentative plan is to jump in September 2018. Stay tuned!