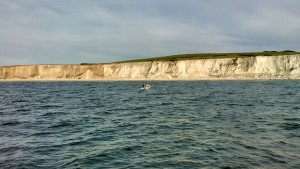 Mohit Oberoi: How I swam the English Channel (part 2)

In the second of the two-part series, climber and triathlete Mohit Oberoi writes about swimming in the cold, choppy waters of the English Channel.

Determined to continue with his attempt to swim the English Channel, Mohit sets off to meet the team in Dover in south England.

We all met on 19th June. We were six of us, our team called Team Sandeitte (six of us including Chloë) with our slot to go on the boat for 22nd June, ahead of a solo swimmer. This is the start of the neap tide.
The issue with swimming in June is that the water temperature is still pretty low, ranging from 12 to 13 degrees Celsius, till the Gulf stream brings in the warm water, raising the temperature to 15 C.
Nervous banter started on the team’s Facebook group about how the temp was still 13 C and The Channel was cold. I was waking up with nightmares of hypothermia.
Back home in Delhi (where I reside), as part of the training, when the temperature soared to 45 C, I sat in a bath tub with ice to acclimatize to the temperature, and was admitted in a hospital the first day.
I just poured slabs of ice in a cold water bucket without bothering to check the temperature. After 30 min, my lips were blue and the core temperature dropped abysmally. Down jacket, thermals and hot soup on a hot June day in Delhi was what it took to bring my core temperature back to normal.
Learnt my lesson, got a nice big lab thermometer for the next ice bath, and maintained a temperature no less than 14 C.
Back to the Channel, we went for our first cold water acclimatization swims in the lovely Dover harbor, got in for 20 mins, came out and were served a hot 30 ml of cocoa and then back in for 20 mins.
This was a great way to work our way to feel comfortable for an hour and above. The next few days would be a morning and evening swim for an hour. The water started feeling a lot more comfortable within two days, the temperature was below 13 C as per the weather stations.
The weather seemed to have settled and the relay and solo took off on the 23rd June, (two other Aussie relay teams coached by Chloë also got into a position to cross).
Our turn was slotted for 24th June. We had an early start to our boat Viking Princess at 3 am, got all our gear in waterproof bags and nutrition packed for the day, with sea sickness tablets taken a few hours earlier.
Sea sickness seems to be a major issue especially in a relay when a lot of time is spent on a boat, the throwing up could cause loss of fluid and debilitate the swimmer, especially in the cold water.
Fortunately non of us got sick badly, a thing which could potentially abort the swim. The Viking Princess sailed out of the lovely harbour and we moved closer to Shakespeare beach. The first swimmer Kari swam out to the beach and cleared the water.

The swim started. Kari swam past the boat. It was 4:05 am and slowly the sun rose out of the sea. We were finally underway. Subsequent swimmers jumped in after every hour as we rotated the swim.
I was the last one and I knew I would be swimming when the sun was up but the water temperature averaged below 13.5 C throughout.

As I jumped in, the waves, the current, the movement of the boat, all took me by surprise. I couldn’t understand.  How am I supposed to cope with this? I thought. I tried to swim free style, swallowed a lot of water trying to get a rhythm. The rhythm  did not seem to come! I kept getting slapped on the head by the waves

The constant encouragement from the boat and team mates kept me going and I knew I had to hang on for an hour, come what may. We cheered each other while swimming indicating the time after every 15 mins.
The feed from the bottle was also hard to take as the water would be moving in all directions, throwing you around, the wake of the boat which was also moving in various directions (never really straight). It was an experience to be swimming here.
Disappointed with my first swim I came out after my turn shivering and waiting to change out of the swim suit into warm clothes as the second round of swims began.
The boat was a basic fishing trawler, with a cabin below which one could not go into as it rocked a lot and was a sure shot way to get sea sick. We stayed on the deck always, cheering the swimmer in water and getting ready with feed when required.
Fortunately the weather held, no rain. We could now start seeing the white cliffs in France, the famous landmark lighthouse of Cape Gris Nez looked near. We knew that the currents which get really strong as we got closer to France would be pushing us around and up and down the coast. Most of the swims fail within a mile of the French coast as the tide changes, and its hard to come ashore.
The second swim turn comes in and  we all have to swim hard to make “forward progress”. This time I was better focused and knew what to expect. It took a lot of energy to just stay in the water and keep abreast with the moving boat, the choppiness was less this time and I managed better progress than last time.
We had all done our second swims, 12 hours had passed. The third round of swims began. Great effort by all, it seems that “just” an hour in water is short but whenever any swimmer came out of the water all energy seemed to have got “spent”.
Except of course Chloë, who was a machine, and pulled a huge distance for the team. The cliffs came closer and the last swimmer was Elizabeth in the water who took over 700 mtrs from the beach from Chloë and landed on the beach in France, while we stayed on the Viking Princess.
Elizabeth was accompanied by a Zodiac (small inflatable launch craft) to the beach. We made it!! She came back on the Zodiac, big hugs and handshakes. It took us 15 hours 10 mins since we started the swim. Big grins and relief that we had made it, the Channel swims are very unpredictable due to the ever changing elements, weather, tide, currents, and one never  can be sure how the journey will turn out.
The Viking Princess with its full power made its way straight back to the Dover harbor in three hours flat. We were greeted by a  lovely evening sky lighting up the English coast as we docked back at 10 pm, 20 hours after we started.  All thanks to a great team – Kari, Jeremy, Chloë, Elizabeth & Shankar. We worked well together to make this happen. A special thanks to Paul Mc Queeny ( Chloë’s husband and a great chap ), who was always encouraging and positive.
As I finish writing this I just read that  for the first time in the history of Channel swimming, a swimmer has done three solo crossings in under a week. No wild guesses for this one, no other than Chloë managed this amazing feat!
Story and Images: Mohit Oberoi
About the author: Mohit Oberoi is a former India sport climbing team coach and adviser to the Indian Mountaineering Foundation. He has authored the country’s first rock-climbing guidebook, Guide to Rock Climbing In and Around Delhi. Mohit is the founder and owner of The Outdoor School, a climbing wall manufacturer that has helped build nearly all of India’s artificial climbing structures. He’s also the founder of Adventure 18, India’s first and most widely spread outdoor gear store.