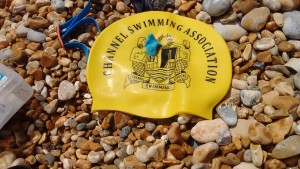 Mohit Oberoi: How I swam the English Channel

Climber and triathlete Mohit Oberoi pens a riveting account of his first attempt at the English Channel swim. The first of this two-part series talks about his preparation and apprehension.

Here I was in cold cold water in the middle of the English Channel, waves slapping me on the head and the boat diesel engine revved to another level, What the hell was going on?! What am I doing here?! Thoughts streamed in and out in the background, the head saying MO! Get on with it lad, the team needs to make “forward progress” always, as Chloe our coach would scream out..

How it all began

A lot of people have asked me this question – How come swimming? Or how come swimming the Channel? What happened? From climbing rocks and being a pucca (firm) terra firma guy, where did you get the idea for the Channel swim?
Being a non swimmer till 2010, it all seemed a bit rushed to think of the Channel swim so soon, but like everything else, we tend to move to the next thing as we complete one.
First things first. The English Channel is a body of water that separates southern England from northern France, and joins the southern part of the North sea to the Atlantic ocean.
At its narrowest, it is about 21 miles (33.6 km) wide between Dover in southern England and Calais in northern France. Many have swam across the English Channel, the first being Englishman Captain Mathew Webb, who did the swim on 25 August 1875 from Dover to Calais in less than 22 hours, and was the first person recorded to have crossed the Channel without the use of aids.
With the Half Ironman-distance triathlon complete, followed by a full Ironman-distance triathlon, and okay another full distance survived by 2014, and in a bid to get better at swimming, I saw this internet promo about a relay swim across the Channel , to be led by marathon swimmer Chloë McCardel (now a ten-time Channel swimmer with two double crossings, means you go up and down the channel in one go).
This got my imagination running. I knew I had a year to train and get better at swimming. It looked like a solid goal for the next 12 months to focus on, of course a lot came in between – three 100 km ultra-marathon runs, two Himalayan treks, rock climbing with kids, triathlons and various other journeys including some work. I signed up in July 2014 to swim the Channel in June 2015, and the journey began thereon.
I signed up to train under Chloë, and sent her a short video of my stroke. I’m not sure, but I have a feeling she was probably speechless for a while. I received a stroke correction document with a comment “you will improve over time.”

I started spending more time on pool drills and the large lakes just outside Delhi with friends. Felt lucky that I had a lake to train in, what an awesome training ground! Open water, no chlorine, no people (most times), and a big circuit of 1.2 km. What else could I ask for? But swimming is different, a lot depends on technique and stroke correction and a coach and a knowledgeable person on the deck always looking at you are an absolute must.
I was part of a monthly Skype chat with our team-of-six people across the world, all from different time zones – Australia, USA, UK, Europe and India, coordinated rather efficiently by Chloë. We discussed  general training, nutrition, concerns of cold water and training especially for it. As the months rolled by my anxiety level also went up.
While I went through a variety of “other events” which I had planned, the Channel was always the MAIN GOAL. A year is a fairly long time to focus on one thing for me, there were many emotional ups and downs, and after my Himalayan Rush triathlon in end March, I decided to give it up with “no I am not a swimmer” thoughts dominating my mind.
A kick from good friends and athletes Susan, Matt and my wife Annie was enough to push me back in the lake (ditching the pool), the frequency of visits increasing. Susan worked on stroke correction, that had some solidly ingrained bad habits, GoPro analysis and working on the basics. Even though I could swim more than 4 km I lacked speed and efficiency.

The Channel swimming is governed by the Channel Swimming Association (CSA) established in 1927 and have a very strict code of rules which govern the swims that are to be ratified as Channel swims. No wet suit (only a normal/ non insulating swim wear), single caps, normal goggles can be used. No other safety or buoyancy aid, no support of the boat, even the feed bottles are thrown on a rope.
An observer on the boat monitors this swim, for a relay swim a swimmer is required to start on the beach from near Dover and swims for an hour before the next person takes over and so on till the swimmer reaches the other shore and clears the water.
The solo requires one person to complete the whole distance on his and her own. The boat is piloted by very experienced persons who are known as the “Channel pilots”, the CSA has a panel of boats and pilots who the swimmers can book in the short two-and-half month Channel swimming season starting end June to early September.
The boats need to be booked well in advance. Sometimes it involves a two year wait. We were booked a slot with the “Viking Princess” piloted by Reg and Ray Brickall, professional fishermen and had also been guiding Channel swimmers for over 30 years and knew the Channel waters very well. The pilots play a crucial role on this distance  which in a straight line is 21 miles ( Dover to Calais), but could typically be over 30 miles, as the swim is guided by the moving currents and tides and the track is usually an S-shaped or a Z-shaped course.
(to be continued…)
Images: Mohit Oberoi
About the author: Mohit Oberoi is a former India sport climbing team coach and adviser to the Indian Mountaineering Foundation. He has authored the country’s first rock-climbing guidebook, Guide to Rock Climbing In and Around Delhi. Mohit is the founder and owner of The Outdoor School, a climbing wall manufacturer that has helped build nearly all of India’s artificial climbing structures. He’s also the founder of Adventure 18, India’s first and most widely spread outdoor gear store.