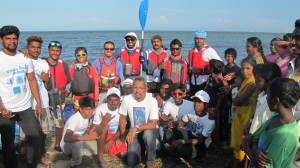 A group of kayakers explore the remote Gulf of Mannar with a mission to clean up the mess in the region.

Read the second of the two-part series on ‘paddle for the environment.’

In the first part of the series, we described the first two days of exploring the Gulf of Mannar, till Hanuman Temple.

By 7 am we were ready to cast off, we saw untreated sewage from the town drain directly into the ocean. It’s sad since there’s a reef right off the shore. We had a chance to talk to more fishermen ” The people of the land pollute the ocean, not the people of the sea ” said of them. True and wise words to go by. As we paddled along we saw more local paddlers. They were squid fishing for their meals. Sustainable fishing is great don’t you think?

As we continued, we spotted same poachers. Moving on from ocean filled bliss or so we thought, Jehan spotted a giant turtle. We didn’t have much paddling to do today. As we were getting closer we started to look for the shipwreck that we had once seen before from shore. As we strained our eyes to the furthest there was nothing. No ship and no wreck. Doubting the GPS and our current location, we continued to look. Then again why fear when Padman is near. We managed talking to him and he found a disc to reflect off the sun. We were in the right bay. Phew.

We spent our evening watching flamingos fly by and the sun set over endless acres of salt pans. A comet passed us and sleep came easy.

We geared up at the beach in front of Nullathani. The waves were bigger.  I waited for intervals between shore breaks and paddled harder and straight as fast as I can to calmer waters. Jehan spotted a fin in the morning sun between boats. He thought it was a shark. We made it to NullaThani and saw a whole flock of seagull plonked on the shore. Busy looking busy. It’s a quick break on the island since we just started off. Next stop Challi. We spotted the poachers again collecting seaweed all around the island. Only this time there were more of them. Aware it’s illegal, they recognize the forest department boat and know just when to scatter fearing only ‘moray eel’, as it bites like a dog and usually gets them by surprise. We then moved on to paddle toward Upputhanni. We got there at a good pace, it’s surrounded with rocks and a reef, with narrow channels for boats to enter.

This island was breathtaking and beautiful. Home to both aerial and aquatic life. The mangroves provided shelter around the island. We spotted baby lobsters, tiny snakes, bird nests, colorful fish and beautiful shells. As we got back to work, we saw more poachers on the other side of the island. Sigh. Our destination seemed far away, but soon the wind picked up and so did the waves resulting in a lot of fun. Getting to shore was easy as long as there was wind giving us a little push from the back. We paddled a total of 36 km. The beach we docked at had massive shore breaks; it was an entertaining arrival for us as well as the villagers. In the mean time the villagers offered us a drink. We rested at Aqua Outback for the night in full comfort and luxury with yummy food as always.

We decided to paddle around the island in front of Aqua Outback and return, an easy 15km.  We paddled with head winds and the sun in our faces.The reef around the island was alive. There were more masked men and fishing boats too. Nonetheless live stag horns made for pretty pictures. We got back in time for lunch. All famished, the food at Aqua Outback is always yum. By evening we had two coastal security group marine officers join us. They arrived to escort us for our last day of paddling to Pearl beach.

An exciting morning mingled with sadness. We accomplished our goal and were reaching our destination. Yet we did not want it to end. The marine police were on board today, the 7 of us set sail. We had fish jumping around as we started, couple of kilometers down though we spotted a sizeable dead parrot fish. Our first pit stop was a bit busy with lots of kids jumping of a pier naked. Young men sitting around colorful umbrella shaped shades. Arjun and Rizwan joined the kids jumping off the pier, it looked like fun until they figured it was too shallow for them and Rizwan got a boo boo. We killed some time there.Padmanaban and Arjun’s chef brought us lunch, they also found Theresa’s house empty with a nice patio.

The afternoon was relaxed, we ate too much and could not get rid of the drunken old man from the village who joined us for lunch. He was extra grumpy since all the chicken was over. The old man tried to convince one of the police boys to marry his daughter. After much debate and drunken tales the old man left and we got paddling again. The wind had picked up, paddling was going to get tough since it was strong head winds. As we got closer to Pearl beach the waters turned red. It was mucky and dirty, and smelled of chemicals too. We started out in blue waters and end up in polluted waters around the factories affecting our oceans on massive scales. Few feet away from Pearl beach we found a school of fish jumping out of the water. We inched closer to find a team of surfers, family, friends, well-wishers and the media present to welcome us and just like that I’m on Tamil TV. Let’s do this again please!

About the author: Charmaine Pereira is a kitesurfer and a kayaker, and COO at Quest Expeditions, and adventure tour company based in Mumbai