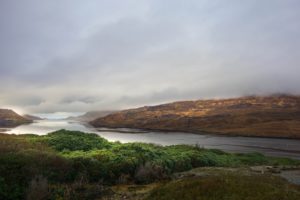 The music, fresh seafood, and lively landscapes, it is a place where Celtic routes are heralded where the soft and lyrical Irish language echoes from old men in tweed suits sipping tea.

The below story is written by Dakota Arkin Cafourek, A published writer and editor who is dedicated to a love of travel, storytelling, and the arts. The Outdoor Journal, has published 3 of Dakota’s stories, and you can find links to each one at the bottom of this page.

*This article was previously published in Passion Passport.

Along this western coast lies Ireland’s famed scenic coastal route, the Wild Atlantic Way. It stretches from the country’s southernmost area along the Haven Coast onwards to the Northern Headlands, where the North Atlantic crashes at the feet of some of Europe’s tallest cliffs. A wedding invitation was cause for my winter visit to this island across the Atlantic, and thereby I left with a love for Ireland. Our journey up the Wild Atlantic Way begins in the coastal town of Doolin. Situated at the edge of the Cliffs of Moher and Burren National Park, Doolin is a small village, spectacularly set among cliffs that descend toward the shoreline. Doolin’s dominant thoroughfare is less a main street than a winding, narrow road dotted with bed and breakfasts, pubs, and a handful of shops with incredible views.

Famed as a music destination, Doolin offers several pubs where musicians take a table — instead of a stage — and sit around in a beautiful procession of flutes, guitars, violins, and the like, playing traditional Irish music all night. Listeners proceed with their pints, unquieted by the performance as though it’s the most natural thing — to see folks from very young to very old finding a tune together — and yet, in Ireland, it is.

Morning arrives with new weather.. The blue skies have moved north, as will my husband and I — he pilots our Dacia as we make our way across the moonlike topography of the Burren and past the famed Burren Smokehouse.

Occasionally, in the small towns we pass, we stop for a quick, cozy lunch of soup and brown soda bread.

This is the interaction we overhear again and again along Ireland’s west coast: a sweet humility and older way of speaking, comparable perhaps to the French spoken by the Quebecois. Galway greets us in a bath of afternoon sunlight. The landscape is rugged, comprised of a beautiful green and sandy coastline on the edge of Galway Bay. River Corrib runs through the city, but is easily crossed by several pedestrian bridges.

Galway is small enough to be walkable, yet still robust with activity. Settlements date back to the Middle Ages, when the port city thrived as an international trade center, and like much of Ireland, the city suffered centuries of famine, war, and siege. But today, it is a vibrant cultural center and foodie destination. Many of its buildings offer windswept exteriors that appear unkempt, but hide world-class culinary and design destinations behind their doors, at once innovative and understated.

In the summer months, Galway’s boat yards swarm with activity, and the white-sand beaches just beyond the town center, which are accessible by bike path, lure swimmers and sunbathers alike. But now, in December, Christmas fills the air.

At Bunowen Pier, we stop at the Connemara Smokehouse for a package of Gravadlax (smoked salmon marinated in sugar, salt, dill, and Irish whiskey), which comes with its own dill mustard sauce. We savor the smoked salmon with creme fraiche, mustard sauce, and grain bread from Dublin’s Avoca. It doesn’t taste like any lox I’ve had before; it has a fine texture and is incredibly gentle in flavor.

Onward, we continue along the undeveloped landscape and stop at Kylemore Abbey — which was built as a castle residence for a wealthy family in 1868 but has housed Benedictine nuns since 1920. Set among beautiful hills, forests, and a river that runs into the Atlantic, the area is rich with opportunities for adventures by foot, bike, or horse.

Further along the route, the Tavern Bar and Restaurant serves a late, warm lunch. The Tavern might not have the most unique name, but it’s easily recognized by its pink exterior on R335 past Murrisk. We sip delicious Achill Beer and sample local oysters — possibly the best I’ve ever had. They’re Pacific oysters raised in nearby Murrisk — larger in size, but capturing an exquisite taste of the North Atlantic’s salty flavor. The pairing is brilliant. The town of Westport in County Mayo is a splendid village built along the Carrowbeg River.

Quintessentially Georgian, it was designed in 1780 as a living space for workers and tenants of a nearby stately home of Earl-Lord-Viscount John Browne. Today, the historic Browne family Westport House is a museum and adventure park open to the public that overlooks Clew Bay, the Atlantic Ocean, Achill Island, Clare Island, and Croagh Patrick Mountain.

Several outdoor sporting stores line the town’s main streets, along with a Foxford Woolen Mills store, which carries beautiful Irish-made goods, as well as scarves and throws. We sit for a Yellow Spot whiskey at the the Old Grainstore, a delightful, wood-paneled pub with a coal fireplace. We then dine at An Port Mór, a restaurant featuring fresh catches from Clew Bay and Connemara, where a chef makes playful twists on the fresh ingredients local to Ireland’s western coast. We’re able to snag a hotel room at the Wyatt at the last-minute — a place that boasts a lively downstairs pub and is located on the octagonal square at the center of Westport, aptly named the “Octagon.” Taking a slight detour from the Wild Atlantic Way, we head toward Sligo and cross into Northern Ireland — not to be confused with the northern Republic of Ireland. A brief interlude across the border for a bite to eat means a change in currency (euros to pounds) and speed-limit measurements  (kilometers to miles) — though our Romanian-manufactured rental car only lists the latter.

As we approach Sligo, the landscape breathes. It’s dusk when we finally reach the ridges of Copes Mountain toward the Glasshouse Hotel, where we’ll be staying. The dramatic, steep cliffs look down on Glencar Lough below. The Atlantic pushes clouds inward off the coast, and floating billows conceal and unveil the landscape in a dance. In Ireland, it seems to never be completely cloudy or completely clear.

Located at the foot of the mountains, between Garavogue River and the estuary leading to Sligo Bay, Sligo is filled with natural beauty — the very force that has lured writers, hikers, and surfers to the county for generations.

Among the literary greats drawn to Sligo’s unique terrain was Nobel Laureate, W.B. Yeats. The Anglo-Irish poet, credited with driving the Irish Literary Revival of the late 19th and early 20th centuries, spent his childhood holidays in County Sligo. Interestingly, the literary revival is also associated with Irish nationalism, the country’s renewed interest in its Gaelic heritage after centuries of invasion. While I’m the furthest thing from an expert in deciphering Irish accents, I can tell you that the ones heard in Donegal are the loveliest. With a cadence much like a song, there are few things more charming.

Alas, Christmas is upon us in the wild landscape of Donegal, the northernmost stretch of the Wild Atlantic Way. The bar at the Lough Eske hotel is crowded with guests who sit and enjoy the music of guitar players and vocalists Paddy Malone and Ryan McCloskey, the latter of whom played in the Irish band, Little Hours. Cheerful and friendly, the musicians take requests throughout the night and engage in witty banter with the most arresting of Ireland’s accents.

Our trip up Ireland’s Wild Atlantic Way comes to an end as we sip spirits made locally in Sliabh Liag, joining in with Paddy, Ryan, and the entire room to sing The Pogues’ “Fairytale of New York.”

And the bells are ringing out / For Christmas Day.

Dakota Arkin Cafourek is a published writer and editor. Dedicated to a love of travel, storytelling, and the arts, she serves cultural institutions in New York City and East Hampton, NY.

The Outdoor Journal has published more of Dakota’s work, such as Living Small: A Road Trip Across America and Idyll in the Highland Mountains.