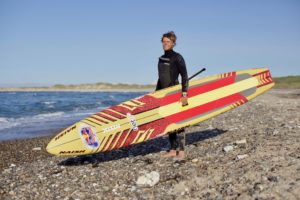 At the 2017 ISA World SUP and Paddleboard Championship, perhaps no individual is a greater draw for the fans and the media than hometown favorite Casper Steinfath. The Outdoor Journal caught up with the four-time gold medalist for a chat about all things SUP last week

Casper Steinfath, a 24 year-old Dane (whose birthday is today, September 5!), is a four-time gold medalist at the World Championships, winning his most recent just two days ago in the SUP Sprint. He hails from the town of Klitmøller and grew up surfing in the waves at Cold Hawaii, the local surf spot that will play host to the second half of this year’s Championship. In addition to competing for Denmark, Steinfath is also the ISA Vice President and Chairman of the ISA Athletes’ Commission and played an important role in bringing the Championship to his home country.

The Outdoor Journal caught up with Steinfath at the end of last week.

How many times have you competed at the ISA SUP World Championships now?

So I’ve competed in four editions so far, and I’ve won three of them in the Technical Race. Last year I also won the 200 meter Sprint which wasn’t an official discipline then. It was a test run. I was pretty psyched about that. This year it’s an official discipline and it’s taking place right in the middle of Copenhagen so it’s a pretty big deal.

Can you talk me through what the Technical Race is like?

It’s my favorite discipline. It’s a three kilometer race where we have to paddle multiple laps around a course. It involves running on a beach with your board, charging out through the surf, and turning around buoys and stuff. It’s really an action-packed discipline where you’re at the mercy of mother nature and the waves. That’s what’s really fun about it―that it’s so dynamic.

Do any of your titles mean the most to you for any particular reason?

They’re all pretty special to me in their own way. The first one was probably what kickstarted my career, in Lima, Peru in 2013. On the final stretch of the race, I caught a wave back to the shore, and on that wave I was riding next to 10-time world champion Jamie Mitchell. And we were just riding that wave, casually, together. It was like time stood still on the wave. I was just an 18-year-old kid standing next to my hero. We were kind of just waiting at that moment on the wave, side-by-side, so Jamie reached out to me, shook my hand and said, “May the best man win.” It was an amazing moment. So then we jumped off the boards in the shorebreak, Jamie face-planted in the sand [laughs], and I managed to run up to the finish line.

How did you first get into SUP? And correct me me if I’m wrong here, but you used to have a fear of water, right?!

Yes, that’s true! I grew up with my family here in Denmark. I grew up surfing quite a lot. That was fun, but slowly the passion for the ocean helped me overcome my fear of water. My passion for playing in the waves was greater than the fear.

So most of my youth I was a surfer, but then on a surf trip to Portugal, when the waves were small, my uncle had a SUP with him, and we started playing around on that. Little did I know what was about to begin. Stand-up paddling was perfect for me when the waves were flat, I could still have fun on the water and not go totally insane.

What’s the surf and SUP culture like in Cold Hawaii and in Denmark more generally?

I guess Denmark is not an obvious surfing destination. But we have over 7,000 kilometers of coastline, and so for stand-up paddling it’s a mecca, it’s a hotspot. There are so many places to paddle.

There really is a thriving surfing and stand-up paddling culture. I mean, it’s really growing fast in Denmark―people have really jumped onto the stand-up paddle train, so-to-speak.

The Danes are pretty tough people, so they’ll get out there even in cold weather and rough surf. SUP is a great way to explore all the water in Denmark.

What events are you participating in this year? Do you think you’ll be able to defend your titles?

I’m doing the Technical Race, the 200 meter Sprint, and the Relay Sprint.

I’m a modest, humble Dane [laughs]. I’ll take them one at a time! It’d be a dream come true to defend both my titles, and I’ll go for it, but for me it’s just a win already, having the world championship in Denmark and showing the world what we’ve got here.

[Since the time of this interview, Steinfath competed in and won the SUP sprint, claiming his 4th career gold medal at the Championships.]

In addition to being an athlete, you’re also the ISA Vice President and Chairman of the ISA Athletes’ Commission? What’s it like representing your fellow athletes on such a big stage?

I’m really stoked to be a part of this sport of stand-up paddling that’s growing so fast. But it’s also really nice to have a voice on the organizational side of the sport as it grows more. It’s interesting to be part of the governance of the sport. SUP is so young so there’s a lot of work to do still.

Tell me about this crossing or a famous Viking route you tried earlier this year.

The Viking Crossing! That was a fun one. That whole project originated from a dream I had as a kid. I idolized the Vikings who were amazing ocean venturers―they made it to Greenland, even the U.S. As I got into SUP, it was the fantasy that I could use my boat as a vessel to paddle large distances. So I had this crazy idea to paddle to Norway, to challenge myself and see if I could push myself to that limit.

As an extra challenge, I decided to do it on February 1, 2017. One of the coldest and darkest days of the year. It was really rough conditions. The cold and dark was a huge factor I had to work with. So I fought my way across the Skagerrak Strait [which separates Denmark from Norway]―it’s 130 kilometers of super treacherous open ocean.

Everything was going great most of the way. I was good at staying active and stuff, but after 16 hours of paddling in turbulent waters, I hit my limit. It was the limit of mother nature―no matter how hard I paddled, or how fast I paddled, I still couldn’t fight against the tide of energy pouring against me. I made it 118 kilometers―58,000 paddle strokes. I could see the lighthouse of Norway. So it was a bummer, but then when I looked at it after, I was very humbled. People ask me “Was it a victory or a defeat?” And I still feel it was a victory, because I pushed myself as far as I could, but I also realized you can’t overpower Mother Nature―she has the last and final say.

Definitely planning on doing a second attempt this winner. I plan to learn from my mistakes. Of course you’re going to fail sometimes, so the most important thing is to learn from them and come back stronger.

And finally: What’s your favorite thing about SUP?

My favorite thing about SUP as a sport is that it has so many dimensions to it. It accommodates so many levels and different types of adventure. You can have an adventure paddling on a lake. You can paddle cool rivers and oceans. And if you’re an adrenaline junky, you can also charge big waves. So there’s really something for everybody, which I think is pretty cool.

Check back tomorrow for another interview, and watch the livestream of the Championship here:

As Casper says, SUP offers something for everyone. Come try it for yourself on this Nicaraguan Adventure featured at The Outdoor Voyage!