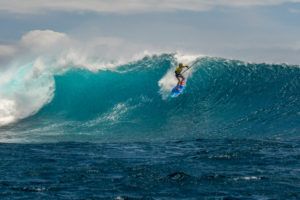 A lot of the athletes at the 2017 ISA World SUP and Paddleboard Championship came to stand-up paddleboarding by way of surfing or windsurfing, and Australian Shakira Westdorp is no different.

What is unique to her story is the board she learned to SUP on. Ten years ago, Westdorp and her friends crafted a 12-foot homemade stand-up paddleboard based on the boards her friends had seen on a trip to Hawaii. “It was the ugliest thing you’ve ever seen,” Westdorp says. “But we went out there all summer long on it, and got really into it.”

The rest is history. Westdorp, now 32, has been an integral part of Australia’s four World Championships, winning gold in SUP Surfing at last years event in Cloudbreak, Fiji. We chatted on the phone with Westdorp last week, to pick her brain about the Championship, the sport of SUP and life in general.

You got into SUP through traditional surfing. Do you still do a lot of that?

I was a normal shortboard surfer, and I have a background in the lifesaving movement in Australia. I still shortboard a lot. I think it still helps my SUP surfing. You have to read the surf differently between the different crafts. Makes you a better all-around surfer being able to switch between them. But I don’t compete in shortboarding anymore.

You used to be a professional lifeguard. What was that like?

I mean, I spent my whole childhood on the beach and always wanted to be a lifeguard. As soon as I finished school, I took the exam and spent seven years working on the Gold Coast as a lifeguard.

I later looked into becoming a firefighter and went through all the testing and processes for that. I’ve been a firefighter now for seven years now. It’s a really great job, and it has its challenges as you can expect, but we get to help a lot of people out and improve their situations. And the bosses are pretty flexible with my tavel and sporting and competing, so that’s pretty great as well.

How many times have you competed at the ISA SUP World Championship now?

I’ve competed four times, and this is my fifth time. I got second the first year, second the second year, third the third year, missed a year, and then I won gold last year [in SUP Surfing].

What was it like to win the gold in SUP Surfing? How did it feel?

I’d come so close for a few years, so I was pretty pumped to win it at a quality [surf] break like Cloudbreak. And I’m a left hander and goofy footer, so I felt like it would be an awesome one to win. The waves were pretty solid that day, and everyone was charging pretty hard.

I was stoked to take that out. It was like four years of trying and I finally got there, so yea, it was awesome.

Do you think you’ll be able to defend your title?

This year I’m just participating in the surfing again. I’m feeling pretty confident. I feel like I’ve been surfing pretty well. Unfortunately the forecast doesn’t look very good. Looks like it’ll be pretty small to flat surf. I brought a different style board this year with me as a bit of a secret weapon. It’s called a Hyper Nut, and it’s got a bit of a cut-off nose thing with a big wide tail. IT picks up a lot of speed, kind of like certain shortboards. Just picks up heaps of speed out of nowhere, so if the waves are small it might just be that little extra thing that I need to stand out.

What are your first impressions of Denmark?

I’ve had such a great time the last couple days, just cruising around on bikes exploring the city. Did a little bar hop last night. It’s beautiful, I’m realy looking forward to heading back out to the coast and Cold Hawaii.

It’s pretty gnarly on the bike path, though [laughing]. You’ve got to have your wits about you…it’s psycho! They’re coming at you so fast and it’s the opposite side of the road to what I’m used to.

Traveling to comps all over the world, you probably develop some incredible friendships  with the other athletes. Can you speak a bit about that?

I mean the ISA is so good with that. I’ve met people from the first year, and you see them coming back every year, so you can stay in contact with them. It’s like one massive catch-up. When you’re in their country or they’re in yours, you end up staying together and so you can form these pretty special relationships all over the world.

What do you think it would be like to go to the Olympics for SUP? Is that something you’ll be hoping to compete in if the International Olympic Committee adds it to the Games at somepoint?

Look, I think they’re trying to get SUP in for 2024, so I think it’s probably pushing it for myself to still be at the top of the game by then, but you never know. Hopefully we’ll still have a younger Australian crew getting into it.

You always grow up at as a kid dreaming of representing your sport and country at the Olympics, but this Championship is pretty close, so I’m just stoked to be a part of it here.

Finally: What’s your favorite thing about the sport?

It’s just such a fun thing to do and you can do it anywhere: in lakes, down rapids, in the surf. And anyone can do it. I got my Mom out there and she’s never been a surfer or anything. She got straight up and could paddle around.

Everyone can get together and have a paddle and a laugh. It’s pretty social and pretty fun. It’s just amazing.

Follow Shakira’s quest for a second gold here at The Outdoor Journal and get started on your own SUP career with a featured adventure on The Outdoor Voyage!