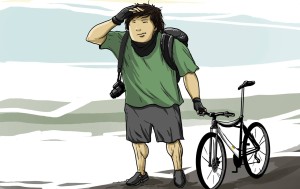 The Great Himalayan Cycle Trip is a design student's attempt to traverse the entire Himalayan range on a bicycle.

Shubham Dharmsktu, a design student from Uttarakhand and an outdoor enthusiast plans to cycle across the Himalayan range from Arunchal Pradesh to Jammu & Kashmir via Nepal and Bhutan. The 4000km+ journey, powered by SCOTT Sports  along with gear sponsored by Outdoor Travel Gear and The Bike Shop India is expected to take three months. With the help of sponsors and funds created from a crowdfunding campaign, Shubham, accompanied by two other friends hopes to create a documentary film at the end of his travels. In a first of his travel-diary series, Shubham gives a brief outline of his trip, and writes about what got him to attempt this journey.

Background
Picture a regular college student, going to class, working on projects, meeting work deadlines, day in and day out, every single day. Until one day snap! He decides it’s time to get back to the outside world again.

That’s how most things take off with me. My name is Shubham Dharmsktu and I’m a student at the National Institute of Design in Ahmedabad. I’m a regular guy with a passion for adventure. In the summer of 2014, I became so horribly afflicted with the rut of a regular schedule, that I began lusting after the outdoors. I would sit around, look at the map of India, and dream about places to visit. One thing lead to another, and by the end of March, in the middle of the night (3 am to be precise), I packed my bags, got on my cycle, and headed out. I still remember, as I cycled out of the hostel gates, the security guard asked me where I was going. I nonchalantly replied “to Kerala” as I cycled away leaving the confused guard, and my secure world far behind me.

Now I hadn’t exactly trained myself physically for this trip, so the next 3200kms included a lot of sweat and a whole lot of determination. Some days would go so perfectly, and I’d feel like the entire universe was trying its best to help me get to my destination, and that would motivate me to keep going. But then there were other days when all I wanted to do was catch a train and go back home, and not have anything to do with perspiration and highways. However, my faith would always be rekindled soon enough by the wonderful people I’d meet on the way. And so, 58 gruelling days later, I was at the tip of the subcontinent. I had reached Kanyakumari!

The Exhibition
I later held an exhibition to put on display some photographs from the trip and the stories behind them all. What followed the exhibition was the best part- people who previously thought achieving what I did was impossible, had become inspired to go on all kinds of crazy adventures as well. They figured ‘if he can, so can we’!

I wanted to continue inspiring people to realise their own potential, so one Sunday I took about 50 people on a 70 km long bicycle trip to a bird sanctuary in Gujarat. Most of them hadn’t even cycled 10kms until that day, but by that evening the response and energy I got from them made me want to do it again.

The Great Himayalan Cycle Trip
So finally, this summer, I have decided to push my limits further. I plan to cycle from Arunachal Pradesh to Jammu and Kashmir through Nepal and Bhutan.

That means, I want to cover almost the entire length of the Himalayan range within these 3 countries.

In fact, as I’m writing this, I’m packing a bag and checking for the confirmation of my train ticket from New Delhi to Arunachal Pradesh.

I plan to start cycling from Wakro, the north-eastern-most point of India in Arunachal Pradesh. I don’t take the highways, I try to go through unchartered territories and ask locals for the way.

Documenting the journey
As I experienced with my previous trip, the hardest part isn’t gathering the stamina, or finding daily meals (though those are pretty hard too). The difficult part is being by yourself.

But as it happens, this time I won’t be completely alone! To share my experience, I shall have two filmmakers from NID with me to shoot the trip. My aim is to share my inspiration with the world. I want everyone to cycle and experience the entire Himalaya with me through my travel blogs, photographs and the eventual travel documentary.

I want to show the world how a layman can overcome the dangers of the road and terrain, camping in the mountains on a crazily ambitious cycling trip while discovering new places and people.

As for now, I shall tentatively be in Ladakh (Jammu and Kashmir) almost 3 months from now.

With a hopeful heart, I look forward to sharing my story. See you on the other side, and happy traveling!