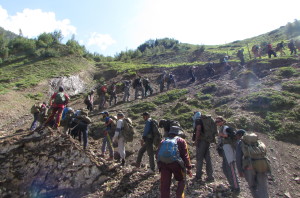 The making of a rock climber at Jawahar Institute of Mountaineering

An economics student realises he needs to climb mountains as much as the corporate ladder and enrolls in the basic course in one of India's cardinal mountaineering schools, the Jawahar Institute of Mountaineering.

For a very long time I had been craving to do something exciting. And the usual squash and climbing the wall at my college gym in New Delhi seemed banal. Being an economics student, I was advised that the ideal channel was to acquire an internship with a leading corporate firm and move a step ahead in the rat race. Keeping all these career tips in mind I did something quite contrary. I signed up for the Basic Mountaineering Course at one of the five leading mountaineering institutes in the country the Jawahar Institute Of Mountaineering And Winter Sports (JIM & WS) located in Pahalgam, a mountainous and snow capped town in Kashmir, north India.

The institute came into existence in 1983 under the leadership of Brig. Gyan Singh, an ‘Everester’. Aru, a scenic valley was initially chosen as the site for the institute but the rise of militancy in the Kashmir valley during the ’80s led the institute’s shifting to Tringla, Batote in August 1990. As militancy reduced in the valley the institute was relocated to Pahalgam in the Lidder valley.

On 30th May 2013, after a long restless ride on the ‘royal cruiser’, the rickety bus brought me to Jammu. It was not at all what I had expected. In fact it deflated my expectation of the town which turned out to be just another concrete jungle. My zest to exit Jammu at the earliest helped me get hold of a seat in an SUV and I was off to Pahalgam to start my Basic Mountaineering Course (BMC) ­107. My excitement knew no bounds as the terrain gradually changed, the view became more picturesque and Kashmir­-like (snowcapped, jagged edged mountains, lush meadows, repeat). And I found solace in the company of an elderly man named Shafi sahab who was heading to his village in Shopian. Over the next few hours we shared several cups of Kashmiri kawa (traditional salted tea)  and had conversations about his apple orchards, family, sheep. Shafi sahab grew fond of me (may be because I had a beard longer than his) and invited me to his house for ‘wazwan’, a 26-course never-to-be-missed Kashmiri feast. But nothing could deviate me from my goal, the BMC­107.

The first day at Pahalgam was like going back to elementary school. There were people around but, metaphorically speaking, no one knew how to really break the ice. There were people from all over the country; Bangalore, Chennai, Delhi, Pune, Haldwani, Kolkata. I felt at peace as I knew we all had one thing in common, love for the mountains.

The next day a signboard bearing BMC­107 was put on a bus that took us to to Sonmarg towards the Thajiwas glacier. We were told that our batch was lucky as we were going to train for the whole month at the glacier. Everyone was really happy and excited, it seemed like a bus full of kids heading for a picnic. But these notions were all put to rest when we reached the camping site in Sonmarg. The second half of the day was spent erecting huge army tents and hunting for stones to be used as an anchor for these tents. We were given a few essentials and were told not to lose them at any cost. A rucksack, sleeping bag,  pair of  track suit and wind sheeter. Even though they were not in best of condition, the did the job at the end of the day.

Training commenced and we were divided into three groups of 18. One instructor was assigned to each group and a woman instructor for the women cadets. Training was divided into two parts — rock craft and snow craft. The first 13­-15 days were dedicated to rock craft and the remaining for snow craft. A few days involved treks, river crossing and tests. The first week wiped off any thrill I had associated with the course and the most dreadful part of the day was  the endurance session. We were told (conned) by our instructors that the first week was a ‘no endurance’ one so that everyone could acclimatize to the high altitude. But this turned out to be a military training tactic of reverse psychology. And the worst part was that everyone fell for the ploy.

The first day of endurance started on the note that it will be light stretching, but our instructors literally broke us down with a 4 km run through a mountain trail followed by sprints, push­ups, crunches, forward rolls, star jumps, duck walk etc. After the first endurance session I felt stupid to have turned down the ‘wazwan’ invite extended earlier by my bus companion.

The day would start with people running down the camp site to adhere to the morning rituals in the lap of nature. I found my perfect ‘spot’ around a big boulder and maintained it as my own private poo spot. This was amusing to a lot of my friends and they named it “The Great Ghat” (ghat refers to a series of steps leading down to a body of water, particularly a holy river). Endurance was the toughest bit of the day and to add to it was the two-way 3 km trek to the prestigious HAWS (High Altitude Warfare School) rocks with a load of at least 15 kg. This included carabiners, rock pitons, ropes, rock hammers etc. I felt this sense of privilege as we trained everyday on the HAWS rocks.

HAWS is an elite military school which trains soldiers for modern warfare in high altitude regions. It was inspiring to see these men train, they ran 15 km every day and every soldier had at least 20 carabiners, a rock hammer, rock pitons, and a pair of mittens clipped to the harness at all times. They looked like an elite fleet of paratroopers. But seeing them train I thanked my stars for being on the ‘civilian’ side of life.

The first rock pitch I climbed at HAWS was epiphanic. Surely the rounded feel of holds on an artificial climbing wall was something I was used to but natural rock is a different universe. There were holds that I had previous never seen or felt that i could dig my fingers into. I could feel the soul of the mountain. The instructors taught us the basics and they made everything look so easy. From the rudiments of bouldering, climbing and belaying to making a base the instructors demonstrated with utmost precision and care.

The words of one of our ustaads (instructors) stuck a chord with this humbling experience, he would always say,” Don’t be Gama in the land of lama”. In other words it meant that no matter how strong one is, he will always be weaker than the mountains. The lectures were informative and interesting. From do’s and don’ts in the mountains to formation of glaciers and avalanche rescue, every lecture ended up providing a new perspective about the mountains.

If it was not for the kitchen staff most of the students wouldn’t have made it through the rigorous schedule required to even scrape through the basic course at JIM. After the endurance session, breakfast was not just a life saver but an incentive to pull through the course. Visuals of lunch loomed before our eyes after a long afternoon of rock climbing /ice climbing and dinner was an insatiable feast of halwa and kheer (Indian sweets).

With so much happening around, one tends to forget the location of the course was in Kashmir; ‘heaven on earth’. From dawn to dusk and even after that, the valley surprised me with its beauty even during backbreaking endurance sessions. The nights were as spectacular as the day, the snow covered peaks bathed in moonlight and millions of stars gazed down at us weary mountaineering students. And this made the night guard duty of an hour each in our ‘buddy system’ pretty very welcoming.

Soon more than half the course was done and we realised the first fifteen days just whizzed past. Time had stopped for me in the last few days, and being cut off from civilisation definitely added to it. The next ten days were dedicated to snow/ice craft and this meant walking with our snow boots on and carrying all our equipment comprising ropes, crampons, ice axe etc. to the Thajiwas glacier.  We were taught crevasse rescue methods, base making, various climbing methods. We went for two day-log treks during the ten days of ice craft. The first trek was to a point called ‘Table Top’ followed by ‘Happy Valley’. It was exciting but tiring given the 15 kg backpack we all had to carry.

Suddenly, without a warning the instructors stopped the endurance sessions. It had an unprecedented effect on me. I was missing it. I couldn’t believe that the most dreadful bit of the day had become so dear to me that I had started missing it. The pain in my groins and shoulders each morning was not there anymore but i was aching for that pain.

As the end of the course drew closer a bitter sweet feeling began to do the rounds of my mind. As elated as I was to have ‘pulled it off’, a bit of gloom also lurked because life in ‘this perfect little world’ was coming to an end for me. Finally the moment arrived when were to be tested for the skills that were taught in the last 25 days. The endurance test was a 7 km run with a load of 10 kg. I ran downhill and jogged the uphill part and managed a decent timing to get me an “A”. Rock craft and snow craft were tested along the same lines of base making and rock climbing and ice climbing respectively. The final round included a written exam and individual vivas. The tests were just a formality, I had learned about a whole new world just being out there and listening to the valuable experiences people had to share.

After moist eyed farewells the students headed home knowing that the skill they acquired at the Jawahar Institute of Mountaineering and Winter Sports (JIM & WS) would be useful for a lifetime.

The Jawahar Institute of Mountaineering comes under the jurisdiction of ministry of defence, as a result the fee structure of all its courses are subsidised by the government of India. The fee structure of different courses offered by the institute are:

Melvin Michael is an economics graduate from Delhi University. Born in Himachal, his love for the mountains takes him on several exploratory treks and climbs.