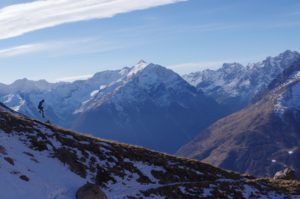 Running on Empty in New Zealand’s The Ultra Easy 100

An engineer and a beginner ultrarunner, Martin Kern dealt with hunger pangs on rough terrain at this year's The Ultra Easy 100km in New Zealand.

This is how he beat the odds to finish second overall.

Martin Kern was born in 1988 in Marseille, south-east of France. As far as he remembers, he has always followed open spaces, and took up opportunities to travel and experience the world. He’s an engineer by profession and works nine hours a day making life stressful and busy. His love for the outdoor space comes from an innate sense of curiosity and connection. Far before he picked up running seriously, he had done extensive explorations of the Marseille Calanques, a magical area, well-known among climbers, where he found motivation and energy to face day to day life situations. He moved to Auckland, New Zealand in January 2016 and enjoys spending his free time outside and in the mountain running, biking and skiing in winter.

With his training partners, he usually includes strength work and alternate from short to longer runs. He covers around 80km to 130km per week. His racing calendar is intense until May this year as he wants to build up some volume in order to perform better in the next few years in ultra-running.

Last month, he participated in The Ultra Easy, a 100km race in New Zealand. The Outdoor Journal caught up with him to learn about his experience. This is his summary of the race:

It has been a couple of weeks since I finished the Big Easy Ultra 100km and I still feel I did not recover enough. I can say it was tough and the battle for the lead left a deep soreness on my body. To cut a long story short, the weekend spent in Wanaka for The Ultra Easy 100 was amazing. I went with friends who recently started trail running and my partner and I finished our races despite the hard conditions the terrain gave. It does not mean that everything went perfectly but at least we all achieved our goal. I believe that giving up is never an option in trail running, the most important thing is to enjoy spending time outside with your loved ones and friends and celebrate.

Considering the 100km, I was in the good group from the start despite some signs of fatigue from previous training weeks. Breathtaking views and sunrise from Roys Peak, I felt I could make my move going downhill relatively fast trying to take the lead… but that was without considering I was probably not trained enough for such long downhills. The next climb to reach Bob Lee hut was kind of a nightmare as I saw my two pursuers pass me. I was somehow not moving anymore in good technique compared to them! At a 40 km mark, hard to believe or not, I mainly focused on eating and drinking to get as much as power as possible to stick to them. Step by step, I made my way between Danny and Weston trying to save power for the last downhill. Danny and I start playing cats and dogs from that point (at 45km), from a 1min20s to 3mins gap on and on, the final battle started! On purpose, I had no more food and water when I reached the aid station where I was expecting my crew to supply more food… but they could not access the hut as the road was blocked. My fault as I should have known that no one could access it. In other words, at 60km mark, I had no more food, I was 4 mins behind the lead and I had to quickly adapt to plan B. Thankfully, a lot of volunteers and people were up there and all along the loop for their support. I grabbed two bananas and some gels that I am not used to at all. I kept on moving, chased Danny for the last 40km. When it comes to food, I am very strict on what I eat. I make my own bars using fresh food and seeds. I consider they give my body much more than what gels can offer. I believe my body will thank me for that in a couple of years. Coming back on the race, I took it easy and decided to save some energy for the last long downhill run to be able to catch runner ahead of me. But at that stage, my body simply refused to go faster and stronger as my right knee starting playing with my nerves…frustrating when you love going downhill fast. Hopefully, no one heard my screaming and French swearing (laughing out loud…). The pain was not fun at all! Upon reaching the valley, heat was now part of the game, thanks to Grant Guise, I was more than ever motivated when he told me I was only 5mins behind Danny. I could even see him! My mind was on fire, my stomach empty and my body devastated but I tried to push as hard as I could for the last flat 13k. Finally, Danny Garrett was simply too strong that day and I was happy to be under previous course record as I finished 2nd in 10hrs and 30min, 102km, with 3700m+ elevation gain.

We were very lucky that the weather was great and we could enjoy Wanaka’s surroundings. The place was so peaceful and relaxing. That is what I love about trail running.

I learned to listen to my body and it’s the key in trail running or any other endurance sport. Life is long enough to challenge ourselves and mountains will stay forever, we simply have to take it easy and take our time.

His past running highlights: