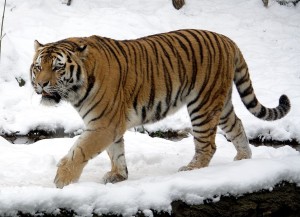 Tyger, Tiger, numbers burning bright but what is really happening in the night?

Latest reports suggest a spike in the global tiger population by 22%.

Top delegates from 13 Asian countries got together recently for an Asian conference on tiger conservation in India’s capital and pledged to double their number in the next decade. Conservationist Julian Matthews explains the real deal behind this number game.

As Delhi’s temperature soared unseasonably to record breaking heights, conservationists, forest officers and Ministers from all thirteen of the countries within which tigers presently reign – or used to reign –  sat in an air conditioned auditorium listening to endless clipped presentations about smarter patrolling, so called greener roads and fighting criminal networks using new high tech drones and camera traps. All very interesting – if it ever happens – but underneath this highbrow event, many ‘elephants in the room’ failed to be trumpeted, or when they were, they were squashed at the first opportunity.

With Chinese, Vietnamese, Laotian and Cambodian delegates in the room, who between them have probably less than 10 individual tigers left in their forests, many of the most critical issues that face the long term fate of wild tigers failed to make it onto any discussion platform. Take tiger trade and farming – a driving force behind the ongoing poaching epidemic – which according to Indian intelligence sources haven’t been this bad for 15 years – failed utterly to confront these same nations, China, Vietnam, Laos and Cambodia, all deeply implicated in the trade and farming of now over 7000 tigers.

Furthermore, the worrying (and seldom highlighted) fact that most tigers, many even in the most well-known protected areas, are largely eating a diet of livestock like cattle and goats, because prey species like spotted deer, wild pig and Sambar are in steep decline from both the illegal ‘bushmeat trade, so easily caught and butchered to supply cheap meat to nearby towns, and heavy overgrazing in most forests outside of strictly protected areas. This together with the fact that in India, with 70% of the world tiger population and most of the key ‘so called ‘source’ populations that could get us out of the tiger hole, the forests within which they can functionally live have shrunk by more than 25% just in the last decade.

Also alarmingly the biggest global economy in conservation, nature tourism, (estimated to be worth US$660 billion per annum) did not even get a footnote in the proceedings of the conference?  Surely the correlation between our enduring desire to see tigers in the wild (and their wild places) and pay handsomely for the privilege, and India’s slow growth in tiger numbers can be seen for what it is? A conservation success story – even if this booming rural economy is happening by default – rather than under any clever, well managed planning regime.

But underneath it all was a simmering and some might say cynical ploy to put a PR spin on present tiger numbers before the gathering tiger conference, with bold world headlines proclaiming success in expanding the tiger populations across the range states, up from the original and already dubious figure of 3200 to a total of 3890 individuals – a figure which is perfect for media editors to quote but infact reflects a ‘best guestimate’ – not an actual body count.  As Jay Mazoomdar, the investigative journalist who blew the cover on the local extinction of tiger in Sariska reserve in 2005 says, “Better counting methods through refined camera trapping and DNA analysis now increasingly account for animals that were either missed or not identified as separate individuals in previous studies. Yet, given that the elusive tiger’s habitat includes some of the most remote and hostile terrain on earth, the truth is that we simply do not know — and may never know — exactly how many tigers there are in the wild.”

Dr Ullas Karanth and three other world renowned tiger biologists hit back with their own PR slug. “Glossing over serious methodological flaws, or weak and incomplete data to generate feel-good ‘news’ is a disservice to conservation, because tigers now occupy only 7% of their historic range. A recent World Conservation Union (IUCN) assessment showed 40% habitat loss in the last decade, and a spike in poaching pressure in many regions. Furthermore Cambodia, Vietnam, Lao PDR and China have virtually lost viable tiger populations in recent years. This is not a time for conservationists to take their eyes off the ball and pat each other on the back.”

The catchy headlines may help the so called ‘Tx2’ initiative of doubling tiger numbers by the year 2022, but infact does little to give anyone a better understanding of what is really happening back at the sharp end.  Whilst India and Nepal’s Royal Bengal tigers and President Putin’s Siberian tigers are given high profile political backing, other nations and their sub species including the South China Tiger, the Sumatran tiger, the Malayan tiger and the Indo Chinese tiger of the greater Mekong are all teetering dangerously on the edge of extinction (or have already fallen off the extinction cliff), to add to the three species that have already perished in the last century. So the tiger species extinction count is actually nearer 5 down with 5 to go?

Time to celebrate?  No way. Time instead to get back and work x2 to do a better job – with all the conservation tools we have at our disposal.

Julian Matthews is Chairman of TOFTigers, a nature tourism action charity based in Delhi.