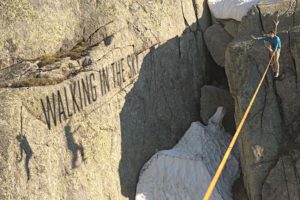 Walking in the Sky

A highlining community high up in The Alps is passing on their knowledge to build a sport that has a large following, but no official recognition.

The last thing on my mind was falling. Yet, two thousand meters above sea level that is exactly what happened.

I woke up before dawn. My bruised left knee felt rigid, like a rusted metallic part extending out of my body. In spite of the warm setting of my apartment, I picked up my gear and rushed to catch the first train out of Zurich. The journey was full of bustling old faces that were heading for their weekend hikes to the Alps, cladded bottom-up in Mammut and North Face apparel. Gotthard pass, connecting the Italian and more relaxed part of Switzerland to the north, is an absolute marvel. The cliffs here jut out naturally, providing a playground for adventures of every kind.

As we arrived at our destination, I could see distant figures in the air. A near invisible strand of rope was the only thing between them and an abysmal gorge of razor sharp rock and cold glacial streams. High above them were snow-capped mountains. Samuel and his troupe had already rigged the highlines. I was stoked to get on one, taste the sense of disorientation to the core and involuntarily plunge down to feel it all pass through my spine, not knowing whether it would be up or down.

If you think slacklining is easy, highlining is a roller coaster of emotions. The human body is organically programmed to learn. However, I had not realized that an unfamiliar environment could force me to unlearn most of what I knew about walking on two-inch webbings. My mind drifted to the thoughtlessness of frequently walking on a now seemingly ordinary slackline. I was here for an informal gathering to learn how to highline–a sport with a rather huge following but no official recognition.

A lot goes on, unnoticed, in the Swiss Alps. For the Swiss, climbing these mountains was not enough. About a handful of them started rigging lines where many would never dare to look. Even though there are more than a few hundred highliners in Europe, not many have the courage or training to rig lines in exposed locations. Highlining is not just slacklining high up in the mountains, it is doing that in isolation, mostly with no onlookers and definitely no ground. If you asked me a year ago, I would have never imagined myself between two rock faces hanging like a pair of trousers on a clothesline.

High up in the Gotthard, Matt was struggling with the fluorescent yellow webbing, with non-stop beta from the crowd that was there to learn. Walking these lines requires a lot of courage and focus and so much unrequited noise can push you either way, especially if you are a newbie at this sport. It was a good thing that Matt had more experience than I did.

I slid down to the closest spot with my camera, a meter away from the anchor of this webbing that makes people happy around the world no matter the religion they follow, the language they speak or the money they make. Matt executed a perfect Chongo Mount (standing up on a line from the sitting position; which is way harder than it sounds) as I captured his incredible dedication to fight and find his internal and external balance. Waking up this morning seemed like the best thing I did in twenty-five years.

Matt walked the line back and forth. In the distance, Samuel Volery, Thomas Buckingham and Salvatore Daniele were talking about their experiences on the line and educating us on dealing with fear. In today’s money minded world, Sam and his friends did not owe anyone free training and gear placement. They did it for the love of the sport and help everyone avoid the mistakes they made at the time of starting out. This workshop was a great opportunity and many more like this around Europe allow practicing highlining in a safe and controlled environment.

In spite of the frequently changing weather, the mid-afternoon sun found my tanned skin. This time it was my turn. It is hard to chicken out with a beautiful woman sitting behind you, equally scared and waiting for her chance with a reluctant smile of eagerness.

I slid on to the line with the familiar figure-of-eight knot being my only lifeline. It is a comfortable thought to have given that I am an experienced climber. Ironically, the one thing we learn while climbing is to avoid falls, though knowing how to fall is equally important. I knew in my head that as soon as I tried to get up on the line, I would fall, this time into dead air. Things stopped making sense and all the loud noises started to fade.

The leash was all over me. I struggled to keep it in check and played every possible scenario of a fall in my head. Should I hold the leash? Will the leash hold me? Are my toes in the way of the leash ring? Will I be able to come back up? My head was clouded with questions and concerns I never had while walking on much longer lines in a park.

If I were to have any shot at this, I knew I had to jump off the line to believe in my leash. Paradoxically enough, this seemed like the only way to have my peace of mind back. Brave new world, eh. The jump was fun and soft and I may have even done it a few more times.

There is incredible history in these mountains. Starting from first ascents of previously impossible peaks to building vast metallic structures and serpentine tunnels through these mountains, the Swiss have done a fairly good job of being iconic. I felt like I was close to that history among this crowd, still conserved in the presence of souls who are making a difference by not accepting the fabricated nature of this society. The love for nature is so resounding here that every time someone walks a line in the Alps, someone in the Dolomites must feel the reverberations.

I flipped the leash from around my knee and pulled on it to get back up on the webbing. This stretched my muscles harder than I anticipated and left me thirsty and gasping for air. Highlining is much more laborious than it seems, especially when you are starting out. I pulled the webbing closer, rolled over and got into a good position, this time being less nervous. I mounted my rear leg on the line, took a deep breath and stood up. For a moment I was thoughtless, just moving enough to get my balance right. Three seconds later I was hanging from my leash.

Being a climber first, the idea of falling is unsettling, both for my pride and training. But trying a highline for the first time gave me a good lesson in humility and the enormity of life around us. I have never been so sore and exhausted, but I have never been so happy either.

Feature image: Sitting on a 30mm webbing facing an enthusiastic crowd waiting for their turn is just about enough pressure for a newbie. Photo: Trivik Verma