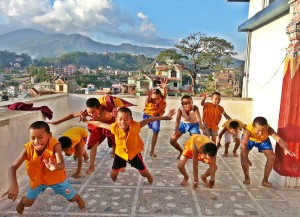 An Indian yoga practitioner travels to Kathmandu and imparts the practice to earthquake-traumatized kids of a monastery, and discovers it helped them recover.

Months after a major earthquake claimed over 8000 lives and injured more than 19,000 across various districts of Nepal, several big and small outfits reached out to help. Ruchika Wason, a yoga siromani (teacher of yoga) residing in Gurgaon in north India decided to help in her own way. She made her way to Kathmandu and taught yoga practice to children of a monastary, an orphanage and working women.

The hottest selling item in Kathmandu these days is a surgical mask. Everyone is seen wearing one for two reasons, one for the stench as there are still dead bodies buried under the rubble and the second to prevent airborne diseases. Several health agencies have issued warnings for diseases like cholera, dysentery and hepatitis amongst several others due to damaged sanitation facilities and contaminated water sources.

But amidst all this and more there is hope and will to rebuild what has been damaged.

I reached the ‘Khawalung Tashi Choeling Monastery’, through the ‘Innovative Social Centre’, Kathmandu. At any time of the year, as I was told, there are around 25 volunteers but after the earthquake the number has shrunk. I discovered that I was the only one there. Volunteers in Nepal, these days, are mostly international tourists who chose to stay back for relief work and some are like me who arrived after the earthquake.

As a yoga teacher, my aim was to impart knowledge of the practice to as many people as possible.

The Khawalung Tashi Choeling Monastery was founded in 2005. It preserves the general Buddhist teachings and houses a school for young monks who come from remote regions of Nepal, Bhutan and Tibet. Along with spiritual education, they also get food, clothing and medical care at the monastery. There are around 50 young monks ranging from 5-21 years here. They are totally dependent on volunteers to teach them English, sports and any other language or art form but after the earthquake there have been rarely any volunteers and they have thus been lagging on these subjects.

When I reached the monastery, making friends was easy as these young monks have no access to gadgets like phones or tabs. The bond was forged by allowing them to play with my phone. And why not, I was here to win their hearts, take care of them, teach them yoga and English.

The first English word these little monks seemed to learn from me was ‘earthquake.’ “What’s the spelling of earthquake?” One of them asked. They were on YouTube searching for the ‘Nepal Earthquake Videos’. I was taken aback, specially, because I was told that they were scared of earthquake.

The monastery had two tents built on its porch for them to sleep in as their rooms were on the first floor and if an earthquake strikes again they will have to jump out of their bunks, get down the stairs and then come out of the building. That is too long for anyone to survive an earthquake of that magnitude.

It’s sad to see how paranoia can set amongst people and affect young children irreparably. And it’s not just the monastery or the orphanage but it’s everywhere. Even in Kathmandu, I saw many people living out in tents with their children while their houses are still intact.

I was determined to train the young monks in yoga and help them relieve stress, build their stamina and make a real difference in a small time frame.

The first morning I faced two big challenges, yoga was new to them and they didn’t understand my language. I had to invent unconventional ways of working with them. I primarily teach Hatha yoga, which is a set of physical exercises and postures designed to align your skin, muscles and bones and open channels in the body to allow a free flow of energy.

I divided the monks into two batches – 5 to 12 years ( Kids yoga) and 13 years and above (Teen yoga).  I taught the teen monks the asanas (postures) through actions, elementary English words and even drawing some on paper. With kid monks I did theme yoga sessions, like forest with animal poses and ocean and aquatic life as themes. These ideas seemed to work, to further get their participation I got them to work with story and vision based relaxation techniques. This along with yoga games and challenges got them hooked on. They were picking it up much quicker than I had expected.

Slowly the whole yoga routine – initial relaxation, pranayama (breathing practice), asanas (postures) and final relaxation became a part of their daily practice every morning and evening. It worked like magic. Within a few days the chit-chat about earthquake had noticeably reduced. Yoga became their new found common interest and topic of discussion. My phone was still borrowed by the kids but this time just to play video games.

Stanford University School of Medicine and Sonima Foundation, a non-profit for children’s wellness are conducting a study on the same subject. They are trying to determine if a daily yoga practice “in a community can help traumatized children better regulate their emotions.”

I also took out time to teach yoga to a group of women who work in a weaving and stitching workshop. They came from underprivileged backgrounds and worked eight hours a day, six days a week. Ever since the earthquake they have been living in tents outside the workshop. Since they have to work a minimum eight hours a day and also attend to their families in distress they had little time in hand, but were keen to learn. So I got them to do “Chair Yoga”, a technique that requires 15 minutes of their time and can dramatically reduce their aches and pains.

In times like these, whether earthquake or any other disaster, yoga helps people recuperate faster and embrace life again. It helps combat trauma and strengthens immunity. You focus on the present. This experience made me believe in it even more. I saw it all happening in front of my eyes. I urge every disaster management agency to consider yoga in their rehabilitation strategies as it is relatively easier to rebuild houses and bridges than to rebuild the human faith in nature.

About the author: Ruchika Wason is a Siromani (teacher of yoga) from Mayaa Yoga Shala, a 200 hours YTT Hatha Yoga Teacher from the Sivananda Lineage. She teaches yoga at the Sivananda Yoga Centre in Gurgaon. She plans to do more relief work and is working to create customized yoga regimen for kids, people with disabilities, adventure enthusiasts, working mothers etc. You can reach her at ruchika@picketfence.co.in or ruchikawason@gmail.com or mayaayoga@gmail.com