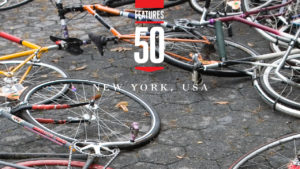 Road biking in and around NYC has it all: Urban adventure, quality pavement, non-yahoo drivers and bucolic surroundings. And good muffins.

This story was originally published in print, in the Summer 2014 issue of The Outdoor Journal, you can subscribe here.

You think you know New York. You’ve seen Rosemary’s Baby, Saturday Night Fever, Annie Hall, Taxi Driver, Do the Right Thing, The Taking of Pelham 123 (the original and the remake)  King Kong (the original and the remake), Ghostbusters,  Escape from New York, etc., ad infinitum….You’ve heard the songs urging you to take a walk on the wild side, suggesting that if  you can make it there you can make it anywhere, seeking refuge up on the roof, pursuing dreams amidst  the lights on Broadway, etc., ad infinitum.  Maybe you’ve even actually visited the place. You know New York is full of adventure that’s good (the worlds of arts and entertainment and commerce,  romance…), and less good (overpriced and undersized living quarters, overpriced and undersized restaurants, various real and imaginary dangers, millions of people a lot like you trying to do everything and go everywhere you want to at the same time…).

But here’s something you may not know about NYC: It’s now one of America’s most cycled-in cities, an exhilarating place to bike in many ways. Cycling types/categories include:

I’ll stick my neck out and say there’s only really one route to do: the 100-kilometer ride from  Manhattan to Nyack

While we’re on the subject of roads, there are nearly 10,000 kilometers of pavement in the five boroughs that comprise NYC. Naturally, that presents a virtually unlimited number of routes.  However, when you knock out routes with too many taxis, buses, potholes, tourists and traffic lights, the options diminish quickly. In fact, as a long-time New York cyclist, I’ll stick my neck out and say there’s only really one route to do: the 100-kilometer ride from  Manhattan to Nyack, New York, with an option to go even further to of Bear Mountain, a 391-meter mountain in the scenic Hudson Highlands. Starting in mid-Manhattan, you can ride through Harlem, take the George Washington Bridge (aka the GWB) over the broad Hudson River and head up north through bucolic splendor where the congestion of Manhattan quickly becomes a distant memory.

Chang says you may feel inclined to believe that the serious NYC cycling scene is either impenetrable, unknowable or both. But it’s not.

Chang says you may feel inclined to believe that the serious NYC cycling scene is either impenetrable, unknowable or both.  But it’s not. “It’s a close-knit community, but not a closed one,” he says. “If you come to ride in New York, or you come for other reasons and end up wanting to do a ride while you’re here, it’s not a problem.  Bike shops rent bikes and many organize group rides. And there are also bike networks like The New York Cycling Club or the CRCA, which have members who are happy to help an out-of-town rider find a bike. You can reach out to these guys and tell them what your size is and you’ll help get you a bike.”

Chang is right in dispelling a myth (thanks a lot, movies) that New Yorkers in general are rude and cyclists in particular really rude as well as dangerous and unhelpful. Courtesy actually is the norm. If you pull off the road for any reason – a flat, to make/take a phone call, to unpeel a banana / energy bar — most cyclists will call out an “Are you OK?” as they approach. Courtesy here also extends to drivers, who are accustomed to a) sharing the road in large part because of the common site of cyclists, and b) are aware that vehicular homicide is against the law.

Not that it’s all Nirvana all the time. “I did see someone try to jump from the Bridge once,” recalls Chang. “I was one way on the south side of the bridge. The guy was on the north side. Some cyclists were egging him on to jump. I don’t know the outcome.”

Knowing that calculating risk is a way of life here, and today I’m feeling the odds are on my side, I begin the ride at Central Park, the 3.4 square-kilometer oasis of greenery in the middle of Manhattan Island. Many visitors believe that the city developed around this naturally-occurring area, but America’s most visited urban park was actually created in the late 19th Century by Frederick Law Olmsted and Calvert Vaux, America’s premier landscape architects. Amid runners, walkers, skateboarders, illegal mountain bikers (you’re supposed to stay off the grass and obey all traffic rules or subject yourself to automobile-grade fines) and rock climbers are road bikers. The primary roadway, with a cycling lane, loops 10 kilometers around the park. The North end at 110th Street is a popular meeting spot for cyclists looking to do The Ride. Best ways to go are via Riverside Drive (you ride past the immense Cathedral of Saint John the Divine), or through Harlem.  Today, a Sunday morning, I go through Harlem. From 110th Street, at the most northern part of the Park, and the southernmost part of Harlem, I take Adam Clayton Powell, Jr. Blvd. and head north to the GWB, about 3 ½ miles away from there.

Harlem is quiet at 8 a.m. on this cool, windless morning. In general, weekend mornings are the best time to do this route since auto traffic is light.  What little activity there is is church-based. Locals attend services and tourists attend to watch locals attend service and hear legendary church choirs. Many of the churches have long lines of guidebook-toting visitors  seeking to enter and see a soulful service, like at the First Corinthian Baptist Church at Adam Clayton Powel Jr. Boulevard and West 116th  Street.

The Boulevard turns into St. Nicholas Avenue at 120th Street. I go up to 141st Street and head toward Riverside Drive, which runs along Riverside Park, passing through a Dominican Republic neighborhood.  It’s then a climb near the hospital at 165th Street to Fort. Washington Boulevard to 177th Street. You pass the A Train subway stop – the same subway line popularised by Duke Ellington in “Take the A Train” – at 175th Street before riding onto the ramp to the cycling lanes of the GWB over the Hudson River. The river is named for the British explorer Henry Hudson who discovered the river in 1609 while searching for a shorter route to Asia from Europe through the Arctic Ocean. That probably came as a surprise to the indigenous inhabitants who believe it existed before Hudson told them it existed.  And so it goes….

The GWB, was the world’s largest suspension bridge when its construction was completed in 1931.  In this direction, the 1,401-meter bridge provides three views: straight across, the cliffs of the New Jersey Palisades (especially travelogue-like when autumn leaves turn yellow, orange and red);  south, down the Hudson toward middle and lower Manhattan; and north, up the River which divides New York and New Jersey.

Two coming/going cycling lanes, which also accommodate  the occasional pedestrian and/or runner, stretch approximately 3.5 meters across.  Although it’s stable and moves little even in high winds, the GWB, 184 meters above the river,  still may not be the best place for someone with a fear of heights. Multiple lanes of traffic whiz safely behind a retaining wall, but the most dangerous aspect of the bridge crossing is when riding around the two towers near each end of the bridgte. You can’t go fast, but that doesn’t prevent some cyclists from trying; it’s always a good idea to shout “rider up” when riding around the tower to give a  warning to someone coming the opposite direction who may be absorbed in the view and taking the turn wide and into your lane.

Once over the GWB, you’ll turn right onto Hudson Terrace.  The objective is to find Route 9W, which you connect with within a couple of kilometers. It’s easy to ask directions or simply follow other road bikers who look like they know where they’re doing – the probability that they will be riding the 71 kilometers from there to Nyack is extremely high.

It’s a beautiful ride along the Hudson River; beautiful, weathered homes overlook the water and it’s a very quiet ride into Nyack.

I come upon a group of approximately 15 cyclists wearing jerseys of various local bike clubs forming a pace line.  There are groups of varying ability congregating there; this one appears to be one of the faster ones. I get to the back of the line; it doesn’t matter that I don’t know any of them. There’s no riding two abreast here; the single-file riding law is enforced here in northern New Jersey as are all other road rules.  Cruising along between 30 and 40 kph, we whiz by Strictly Bicycles, a well-equipped bike shop that features drool-inducing Colnagos, Pinarellos and others, repairs, food, energy drinks and bathrooms.

The whir of chains on cogs and shifting clicks provide the soundtrack along with parts of  dialogues that involve recent races, recent romantic encounters and a “totally evil” landlord who is trying to evict one of the riders who is illegally subletting an apartment,  a common occurrence. It’s always struck me as peculiar to cycling culture that people who barely know each other, if at all, can have the most intimate conversations with others who they may never see again. Just one more titillating fact of life in the age of anonymity, I suppose.

The road, with a broad shoulder, winds through hilly and wooded semi-rural countryside; it’s hard to believe that Manhattan is so close by.  We come upon state line, which juts back into New York State, and I detach myself from the group. This is the hilliest part of the route; it’s possible to reach a speed of 65+ kph on the steepest decent.

There are signs pointing to Piermont, New York, a quaint little town on the Hudson with a cyclist -friendly bakery called Bunbury’s in Piermont and  wetlands. Some days, this is as far as I’ll go (it’s 34 kilometers from Central Park), but today, I’ll continue for six or so kilometers further to Nyack.

It’s a beautiful ride along the Hudson River; beautiful, weathered homes overlook the water and it’s a very quiet ride into Nyack. The most popular destination for cyclists is The Runcible Spoon on North Broadway, a bakery/coffee/sandwich shop that specializes in mega muffins in many flavors. It’s easy to spot – there are a couple of water coolers out in front, bike racks stuffed with top-of-the-line carbon fiber bikes, and riders swarming like bees at a beehive. Inside, cyclists are outnumbering locals by a three-to-one ratio, clopping around on their cleats, playing with their phones and waiting in lines to order food and use the bathroom.  I order a large coffee and a banana nut muffin early as big as my head to make sure I’m properly fueled.

If I were feeling more ambitious today, I would continue on to Bear Mountain, an additional 65 kilometers. But right now I’m happy to stay put at a sidewalk table, watching the world roll by and enjoying my escape from New York.