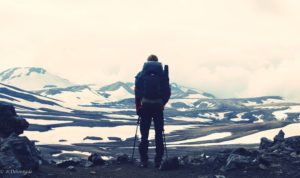 350 Miles on Foot, Under the Midnight Sun

Two Friends take on the elements and cross Iceland from North to South on foot.

During the Summer of 2017, two school friends, Antoine Debontride and Pierre Lefort undertook a North-South crossing of Iceland by foot and against the elements. By chance, The Outdoor Journal‘s Pierre Gunther also shared a classroom with Antoine and Pierre, so upon hearing of their adventure, he offered to buy them a coffee. Pierre asked some questions and listened to their story, of a beautiful, but challenging journey through Iceland’s rugged landscape.

Antoine, a 24-year-old trek enthusiast with a passion for photography was familiar with this kind of challenge, having already completed the GR 20 in Corsica and a crossing of Swedish Lapland, a trek of 350 miles. However, on this occasion Antoine invited his friend (and occasional model during the trip) Pierre Lefort, who was living in Burkina Faso at the time. Iceland was understandably a shock to the system.

Antoine, what inspired you to go to Iceland?

Antoine: By chance, having stumbled across the destination six years ago whilst online. At the time, I was looking for my first solo great adventure by foot, I was in total awe when I found Iceland: unbelievable landscapes, a very demanding climate, an amazing challenge both physically and psychologically. Additionally, all of this was merely three hours from Paris. Despite my excitement, I was under no illusion that this was going to be difficult, even dangerous without sufficient experience. Therefore, I told myself that this should be a goal, I worked towards it, and in the summer of 2017 we made it.

Why this route, and how did you prepare it?

Antoine: In the same way as I do for all of my treks, with lots of homework and time spent online researching. This is a phase that I really enjoy. Not a prelude, but a part of the adventure itself. I had been looking for a big adventure, a real challenge and I of course spotted the famous Laugavegur itinerary (a 3 day trek), but I wanted to challenge myself to something longer. I eventually found my way to Jonathan Ley’s blog, and I read about his North-South crossing of Iceland, “coast to coast”. This was a gold mine of information, and from there, I developed my final itinerary: from Hraunhafnartangi lighthouse in Skógar, south for about 350 miles and 20 days of walking. Buying the maps and finding a partner who could and would join me for this crazy adventure was the only thing left to be done!

What was it about Iceland that left you with the greatest impression?

Antoine: The diversity of landscapes and scenery. During the course of a single day, we could walk on the peak of a volcano, in a sandy desert, and then on a glacier. Iceland is known to many as the “Land of the Extremes”, and we really understood its full meaning as we traversed the country.

Pierre: I was struck by the total lack of any sign of human activity in the Highlands, the centre of the country. Roaming these lands really gave you the feeling that no human had ever stepped upon them before. It made me feel like an explorer. I was also astonished to understand how mankind is dominated by nature. In the heart of the summer, the melting ice makes some trails inaccessible, you have to resign yourself to simply wait before mother nature allows you to pass. In this place, nature is the boss, humans must adapt.

Were there any dangerous moments?

Antoine: There were a couple of moments that stand out. We regularly crossed fords, and on this particular occasion we had to cross 6 in a single day. One the 3rd occasion, the water was 41° F, with a strong current, we couldn’t see the bottom. I stepped into the water, and after a few steps, while I was looking for a support with my trekking pole… there was nothing. My arm sank further into the water, and I could feel it was at least one meter deeper in that particular spot from where I was standing. Due to the weight of my backpack, I toppled into the water. I don’t know how on earth I managed to get back on my feet, but somehow I pulled myself out. Knowing the risks of falling into water that cold really gave me a big scare. For once, the merciless wind of Iceland was helpful, and everything dried within an hour.

I will let Pierre describe the second dangerous moment, which was perhaps one of the most significant parts of our journey.

Pierre: I’ll never forget this moment for as long as I live. It was day 13, our final day before entering the Highlands. From the first moment that we woke up, we felt like this day was going to be remembered. The temperature had suddenly fallen, and we were welcomed by a light rain when we exited our tents. After just a few hours of walking, a thick fog had set in and we could only see ten meters ahead. Navigation had become difficult, we kept heading in the wrong direction. On many occasions, we had to retrace our steps as we aimed for the summit of the mountain range that we needed to pass. It was at the summit that the wind had replaced the fog, and we were forced to push on with great difficulty, continuously feeling as though we would be swept away by a huge gust of wind.

The real moment of misfortune came whilst crossing a névé, along a steep mountain side, with a 30 meter drop down onto the rocks below. We were moving slowly, my steps steadily settling in Antoine’s, when suddenly my left foot slipped. With the weight of my backpack, I fell, and only saved myself from a deadly fall courtesy of a walking pole that stuck full length in the snow. The pole sacrificed it’s life for mine, and whilst I was grateful, this episode was a serious blow to my morale; it felt like I had lost one of my best allies.

Did you sleep under the elements? How did you manage for food?

Antoine: We wanted to do this for ourselves, without support, so we carried everything that we needed. This included tents of our own, not the best solution if we consider the weight, but it felt necessary for a trek this long to have our own space. Along the way, we also benefited from shelters that were open to the elements and huts, maintained by an association of rangers. In total, we managed to spend 5 nights inside a hut out of a total  of twenty nights.

Concerning food, I adopted the same diet as during my previous treks: muesli and powdered milk for breakfast. Dry-fruit mix, chocolate and cereal bars during the day. Soup and freeze-dry meals for diner. I cannot tell you how happy we were to enjoy fresh food once we reached the finish line.

Did you try Håkarl? (Whale Sashimi)

Antoine: What? We saw many restaurants offering shark, whale and mackerels.

Pierre: After the famous hot-dog of Reykjavik and the fish and chips we gobbled up when we arrived, we didn’t have any room for anything else.

What’s the one thing everyone should know before attempting something like this?

Antoine: It is a matter of being prepared. When considering this kind of itinerary, you cannot afford to be unprepared. It’s also important to have self awareness, and good knowledge of yourself. This can only be acquired with experience. Walking 350 miles across Iceland is physical, but the real challenge takes place inside of your head. Loneliness, long hours of walking every day for three weeks… it’s certainly not for everyone!

Pierre: I totally agree with Antoine. However, I would also add the preparation regarding the equipment. It is extremely important to be equipped with good gear and above all test everything before departure. On this type of trek, 80% of people don’t make it because of bad preparation.

What’s the one piece of gear and/or tech that you think was essential?

Antoine: The GPS was very useful, sometimes maps were not accurate enough for us to locate exactly where we were. With the GPS, even in scenario’s of low visibility we were able to continue moving forward. We had prepared by saving a few local landmarks, that helped us once we were on the ground in Iceland.

Pierre: If I let my stomach speak, I would tell you it’s the equipment that you need to cook, but Antoine is right, without any doubt the GPS that was essential.

Antoine, what camera did you use?

How much value does the midnight sun add to pictures?

Antoine: It is true that in a particular light pictures are enhanced, but instead I can’t let go of the unsettling aspect of this phenomenon. You really lose the notion of time. You can wake up at 3 am and still find the same luminosity as during the day. Of course, it can also be a great asset during a trek, you never have to stop because of low light.

Tell us about your favourite photo?

Antoine: Without any hesitation: Askja! It’s a huge volcano crater that we needed to cross during the trek. It was still covered with snow and the weather was gorgeous. Later, we ran into another hiker who told us that he had already come here four times, but this was the first time that he could see even two meters ahead.

Antoine: Perhaps Kazakhstan, Kirghizistan and Mongolia, they are beautiful lands for treks and still not mainstream.

Pierre: I plan to focus on our own beautiful country. France is packed with amazing hikes and treks. I would love to take more time to perfect my equipment before challenging myself to adventures further afield.

If you want to see other pictures of Antoine around the world, have a look at his 500px account here.