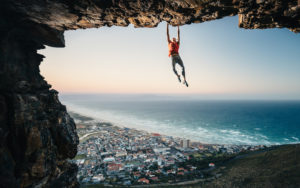 While other free soloists—rock climbers who shun ropes and other safety gear—have parlayed their artform into major sponsorships and TV commercials, South African Matt Bush has largely flown under the radar.

But his solos are some of the most palm-sweat-inducing, heart-racing feats rock climbing has ever seen. Dangling by a single hand hundreds of feet above the ground, Bush is routinely pushing the limits of what is considered possible in the sport.

For a stretch during his twenties, South African climber Matt Bush was very much a part of the hip, colorful, lingo-laden world of indoor competition climbing. “Comps” were the center of his climbing experience. He did quite well, training hard and winning many of the events he entered. And then, like many competition climbers, he burned out.

“I started to question why I was climbing,” Bush recalls. Devoid of the enjoyment he once drew from it, climbing seemed pointless. So he thought back to the first time he realized that climbing was what he wanted to do… Seventeen years ago, Bush did his first climb on top-rope at South Africa’s Table Mountain, wearing nothing but sneakers. He was elated upon his return to the ground. After that, he says, “I knew I would climb for the rest of my life.”

At 32 years old, Bush has been obsessed with rock climbing for over half his life. In those early days, he’d even “bunk school” to get some pitches in. But it is in the most recent stage of his career that he has really found his niche. And it is the most specialized of niches: free soloing.

Free soloing—climbing without ropes or any safety gear—is the boldest and most dangerous discipline in rock climbing, and is practiced by very few. Alex Honnold is the current king of ropeless ascents. More than a few past legends—guys like John Bachar and Derek Hersey—have paid for their daring climbs with their lives.

Though Matt Bush is without question one of the most accomplished free soloists around today, acclaim and widespread attention have largely eluded him. Part of the reason may be that his solos push the boundary of what some think reasonable.

While soloing is more visible today than arguably ever before in the climbing world, it tends to be the soloing of big granite faces like those climbed by Alex Honnold.  In Capetown, “We don’t have a lot of the usual style of rock that people solo, singular features like bomber, solid cracks or really uniform rock,” Matt says. Capetown’s rock tends to be highly featured sandstone, with massive overhangs and wild formations. As a result, Bush’s solos often involve dynamic moves that some consider reckless.

One of his proudest solos to date is a prime example. Route by the River is an 8a+ (5.13c) in Montague, South Africa. It has a big dyno in it—both of his hands and feet leave the wall as he launches himself through the air. Routes with moves like this are not obvious contenders for solos. But for Matt, it was just the opposite.

“I developed my style here on the rock in South Africa,” he says. “Some people see it as a low percentage, dangerous style, but I only solo something if I feel it’s safe for me.”

But even then, when he’s sure he can do a solo, things can go wrong. On his first attempt at free soloing Route by the River, Bush went for the dyno, felt his hand close on the hold, and then, suddenly, he was falling. He plummeted nine meters and hit the sandy bank below with a dull thud. “That was the only moment that’s ever really rattled me,” Bush says. After collecting himself at the base of the climb, he decided to try again. “I thought it might really affect my psyche if I walked away. It was a great decision because I got through potentially crippling fear and failure that day. That kind of fall can end a person’s career, physically or mentally.”

The emotional and mental journey Bush experiences during the course of a solo—before, during, and after—is a study in concentration and maintaining control of one’s emotions.

“Before starting a solo, I’m dealing with my own thoughts and feelings around soloing,” he says.  “‘Am I ready for this? Is it worth the risk? What if something goes wrong? Can I make it? Would it be fair to the people who love me, my family and friends, if something happens to me?’ I wrestle with all these questions before I start up.”

But when the time comes to step into the vertical, he concentrates on pushing all of the doubts from his mind.  “I try to focus on believing. That internal battle is always there. But in the moments before soloing, I talk very positively to myself. I don’t allow those thoughts of uncertainty to dominate me. I take charge of them.”

And then, before he knows it, he’s executing the moves that he has memorized in his mind, in his fingers, in his feet. (Sometimes he rehearses a route five times, sometimes ten times; it simply depends on when he feels ready.) The muscle memory, the focused breathing—everything falls into place: “When I’m on the wall,” he says, “I focus on just doing what I need to do. I have to just be there in the moment.”

Upon finishing a solo, Bush experiences a feeling of unrivaled elation; an elation not unlike that which he felt after his first ever climb in sneakers 17 years ago. “It’s a great feeling to have broken through a mental barrier,” Bush says. While the physical challenge is no less real, reflecting on the whole process “is an amazing thing.”

Bush’s most recent soloing exploits have taken him to a rock formation known as Paarl. A bulbous granite dome, Paarl is about as different as you can get from the sandstone Bush solos on Table Mountain.

While very sharp and textured, the primary features are minuscule bumps and edges that would be impossible to climb were the walls any steeper. Climbing granite slabs like this “takes a lot of imagination,” Matt says. The climbs require an absolute mastery of technique, and a superhuman ability to remain calm. “It’s a very intricate style, friction climbing. The holds aren’t really there. A lot of just pressing on your feet.”

Though the routes there are the anti-style to the overhanging lines he solos at Table Mountain, a couple of them rank among his proudest achievements, notably Casualties of War (7a/5.11d) and Sound of Silence (7c/5.12d). Crawling up the rock like a gecko sticking to invisible holds is a feeling like none other for Bush: “You just have to balance around the features and climb delicately. They are beautiful lines.”

Thus far in his career, Bush has stuck relatively close to home. He began his soloing while studying psychology at university and living on a farm in Montague, and later took his art a few hours down the road to the walls above Capetown. But he has big dreams.

“My goal is to travel through the United States and climb at places over there. Hopefully to achieve some big routes there,” he says. “Moonlight Buttress [a 5.12d big wall in Zion, UT] is definitely a route I’d be interested in. It’s just a perfect line. And of course getting to Yosemite Valley.”

Wherever he ends up, it’s safe to assume we should expect big things from this ropeless daredevil.

To follow Matt’s adventures, check out his Instagram account, and keep an eye out for a film on his free solos at Paarl Mountain in the near future!