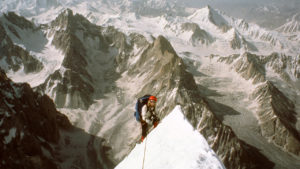 American alpinist and climber Jeff Lowe was suffering from an extremely rare progressive neurodegenerative disease for the last 18 years. He has just passed at a health centre in Colorado, surrounded by friends and family.

A climbing legend, Jeff Lowe made more than 1000 first ascents all around the world. An American alpinist from Utah, Jeff was the co-founder of outdoor equipment company, Lowe Alpine. He brought modern ice climbing from Europe to the United States and was a huge proponent of the alpine style. In 2017, he won the Piolets D’or Lifetime Achievement Award. In 1991, he famously climbed Metanoia, the hardest route on the Eiger.

Suffering from a rare Muscle Neuron Degeneration (MND) similar to ALS, it had left him in a wheelchair, breathing bottled oxygen, coughing through a tracheotomy and eating liquid food through a tube. He required 24/7 nursing supervision.

“Place your confidence in your dreams, not in your nightmares.”

His daughter Sonja Jane posted on his behalf on Facebook: “My father, Jeff Lowe, to put it in his words, “moved on from this material plane to the next” this evening in a peaceful transition.

The last few days were a beautiful whirlwind of laughter, tears, sadness and new friendships. We lived outside the entire time, where my dad always wanted to be, and created our own “base camp” as the wonderful nurses at Lemay Ave Health & Rehabilitation Center lovingly referred to it. We laughed, cried, and honored his life and the many climbs and many lessons he experienced.… and had a 3 day celebratory party, with him as the guest of honor and the one bringing us all together. We all felt this was exactly what Jeff would have wanted, without a question.

The other thing my dad, Jeff, wanted, was to leave behind a legacy for his granddaughter, Valentina, as well as the rest of the world, by sharing his experience on Metanoia not for a profit, but for a purpose-to enlighten others as to what he experienced. To honor his life, achievements, and contributions to both the climbing world and the universe as a whole, and so his beloved granddaughter always remembers him with as much pride as she does today.  Love always and forever, The luckiest daughter in the world.”

In an article for The Outdoor Journal, “Khumbu Possibilities”, Jeff shared an excerpt of his upcoming book, detailing remarkable mountain experiences from his life, contemplating the unknowable possibilities that the unknown holds, in the mountains and elsewhere. His ultimate goal was securing access to the wilderness for current and future generations, while protecting and preserving all wild places. Interviewed by journalist Michael Levy, he told him that even with his disease, he is simply doing another “first ascent”. Michael said of his visit, “On that second day at Jeff’s house, he ruminated on the importance of living in the present, being open to all the outcomes, twists and turns that are unforeseeable until they happen”.

The Outdoor Journal Founder and Editor-in-Chief Apoorva Prasad also met Jeff Lowe just weeks prior to his passing, to give him a copy of the magazine with his article. He reflected on the news saying, “before us came giants, and in this age of internet celebrities, I try to remember my true heroes, legends like Jeff who achieved feats amongst the mountains, that mere mortals like myself can only dream of”.

“When Michael and I met Jeff a few weeks ago, he seemed happy to finally get a copy of the magazine, and was thanking me – I told him that it was I who needed to thank him, that I was truly honored to have been able to publish his story, and was really looking forward to reading the rest of the memoirs.”  The Outdoor Journal team had been working to release a special online version of the article, to help raise funding for Jeff’s ongoing treatment and medical costs.

“Everyday I’m still in the present, still trying to figure it all out … If you can be in the present moment of your life, you can deal with anything that comes your way,” Jeff said.