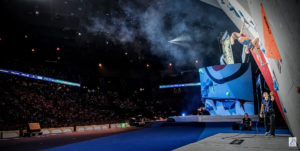 Breathtaking climbs, standing ovations, national anthems—day 4 in Paris had it all! Plus, LIVE streaming of the last day of the championships.

Bouldering: Krasovskaia Clinches Combined, Narasaki Wins Second Title of 2016
Every Athlete who flashed two problems advanced to Finals in Women Bouldering. Most Semi-Finalists did so on problems one and four, but Akiyo Noguchi and Miho Nonaka of Japan also pulled past the large spherical volumes of W3 on their first attempt. The story of the round was Elena Krasovskaia, the sixth and final Athlete to qualify for the next round. The sixteen-year-old from Russia secured her victory in the Overall and may be the youngest IFSC Athlete to become a Combined world champion. She placed 20th in Speed and 29th in Lead Day 3.

In the evening, three Frenchmen competed in the Finals for Men Bouldering, and all three Athletes received standing ovations at the end of M4. Most finalists stuck the triple dyno on M1, but only Mickael Mawem and Manuel Cornu kept their balance on the M2 slab. Tomoa Narasaki of Japan, who became the 2016 Bouldering World Cup ch
ampion in Munich last month, and Adam Ondra of the Czech Republic, reigning Bouldering world champion, both rebounded on M3. The podium placements were left a mystery until M4, a burly bloc requiring both endurance and extension. Cornu grimaced at the crux and did not Top, but his passionate effort still greatly pleased his home crowd. He finished in third place when Adam Ondra found a
no-hands rest before cruising through the toughest section. In the end, Narasaki became the new world champion with a Top on M4, completing three problems in fewer attempts than Ondra.

Paraclimbing: Kobayashi Defends Gold
Thousands of Sport Climbing fans once again fell silent out of respect for the Men B1 (visual impairment) Paraclimbers, who depend upon communication with their coaches on the ground. Nicolas Moineau, winner of the 2012 IFSC World Championships in Paris, was first out onto the steep Finals wall for France, and his endurance earned him Silver. Matteo Stefani fell a few holds earlier, but the Italian still touched enough holds to stand on podium. Climbing higher than them both was Koichiro Kobayashi of Japan. The reigning world champion fell one move from the Top for Gold, with thousands of excited fans applauding below him.

Speed: Four in a Row for Dzienski
Not long after the Paraclimbing Finals ended, Marcin Dzienski extended his winning streak to four IFSC competitions. The Polish speedster posted a 5.83 in the final match against Reza Alipourshenazandifar for the top spot on the podium. Alipoushenazandifar slipped in the final race, but the Iranian Athlete ousted Aleksandr Shikov by one hundredth of a second in an emotional semi-final face-off. Shikov claimed the remaining medal for Russia with a 5.95, besting the crowd favorite, Bassa Mawem of France.

Lead: Garnbret World Champion at Seventeen
Earlier in the day, Ondra climbed two moves from the top of the overhanging Lead wall. The Semi-Finals route boasted a variety of challenges, with slopers at the start, campusing on an extended volume in the middle and blank volumes to finish. Gautier Supper was the first Athlete to reach the top panel, with the French crowd supporting him. Only Ondra and Slovenian Domen Skofic, leader of the 2016 Lead World Cup rankings, surpassed him.

The best Lead Women in the world closed out today’s events. Unforgiving blue slopers kept four finalists at bay, and the five other Athletes in harnesses slapped chalk on the penultimate sloper. Anak Verhoeven of Belgium was the first to stick the move and clip the chains, a feat which stood alone until the final climber of the day: Slovenian Janja Garnbret. The seventeen-year-old and leader of the 2016 Lead World Cup rankings matched Verhoeven’s performance with a Top of her own, pounding the wall in celebration. A countback to Semi-Finals broke the tie, making Garnbret the second youngest Woman to win the IFSC World Championships in Lead. 2014 runner-up, Mina Markovic, stayed on the podium with Bronze due to another countback.

Full results can be found on the dedicated Climbing and Paraclimbing event pages.