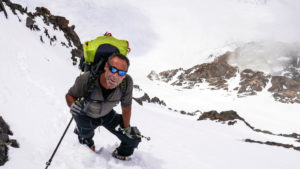 Mike Horn: His Devotion to the ‘Mountain of Mountains’, and the Loves of His Life

The "Explorer of the Decade" on his upcoming documentary "Beyond the Comfort Zone" that follows his attempt to summit K2 with his daughters following the loss of his wife.

Mike Horn does not need much of an introduction. From swimming the Amazon river to circumnavigating the world unmotorized, and crossing Antartica, his next challenge is never far away. Mike’s list of accomplishments as a solo explorer is unparalleled, and he was recently acknowledged as the “Explorer of the Decade”. The Outdoor Journal has been fortunate to get to know Mike, having crossed the Namib and Simpson Deserts with him, we caught up for a quick chat ahead of the release of his new movie, Beyond the Comfort Zone.

You’ve been to K2 several times. Why this mountain in particular? What’s your connection with this place?

K2 for me is the mountain of mountains! Amongst many others, ascending K2 has always been a childhood dream for me. That mountain is like a magnet, every time I lay my eyes on it, it intimidates me. The way it stands, similarly to a pyramid, makes it beautiful to observe, especially from the bottom looking up. Technically, it is also one of the most difficult, if not the most difficult, 8000-meter summit to climb. Everest might be the highest but a lot more people have made it to the top of Everest than to the top of K2…and that obviously means something. A popular destination doesn’t appeal to me as much as a challenging destination. Higher doesn’t mean better. It’s not because I haven’t yet reached the summit of K2, that I will be giving up on this dream any time soon!

“Sherpas often feel ignored and under-appreciated, even by their own government. This to me, is not the essence of adventure travel.”

I love that more and more people are encouraged to step out of their comfort zone and travel to remote places to achieve challenging feats, but not at the cost of having a negative impact on our environment… Unfortunately, Everest is now suffering from the effects of adventure-tourism. The commercialization of the mountain has resulted in an increasing number of visitors over the years. Camps and hiking tracks are now suffering from mass-tourism during the high seasons, which naturally leads to an increase in the amount of waste disposal (oxygen cylinders, food cans, tents and other equipment), which in turn impacts the environment and the experience of future travelers. I believe too many adventurers wish to add the summiting of Everest to their bucket lists simply for the sake of ascending the world’s highest peak, without necessarily respecting what the mountain has to offer. Locals are also affected by this vicious cycle, Sherpas often feel ignored and under-appreciated, even by their own government. This to me, is not the essence of adventure travel. Thankfully, K2 does not suffer from these problems…at least not yet.

Can you give us a preview of the best moment from this expedition?

This expedition was filled with great moments. My daughters and I planned this expedition at a fragile moment of our lives. They had just lost their mother, and me my wife, together we agreed to go on an adventure to change our minds and to regain faith and trust in the world. I’d therefore say that some of the best moments for me were the times I shared with my daughters Annika and Jessica, driving across countries or walking up to the base camp of K2. I also deeply value the times shared with Fred and Köbi, my long-time climbing partners!

“There is a very fine line between carrying on and giving up,”

You didn’t manage to summit again. What stopped you? Will there be another attempt?

Unfortunately, despite making it over the 8000-meter mark, we took the difficult decision to turn back due to poor weather conditions. The abundance of snow resulted in high avalanche risks. After years of exploring, I am aware that one bad choice can result in losing my life. There is a very fine line between carrying on and giving up, too often we want to push a little further simply because we know we are physically capable of it. However, at that time more than ever, it was essential for me to make it back home to my daughters. Mountaineering is for the patient. Only when all the stars are aligned (weather, snow conditions, season, physical aptitude, etc.) can one summit successfully. As mentioned earlier, I will not be giving up on K2 quite yet, I definitely plan on going back!

“The Unknown Adds Spice to Life”

We saw the trailer, it’s awe-inspiring. When is the movie coming out and where will be able to see it?

The movie has just been screened at the Toronto Film Festival and will be released in different theatres around the world next year, in 2019. As soon as we have detailed release dates we will communicate these on social media:
Facebook: @PangaeaMikeHorn | Instagram: @mikehornexplorer

“THE UNKNOWN ADDS SPICE TO LIFE” stood out from the trailer. What’s next for Mike? What do we have to look forward to after this? How much “spice” to expect?

Indeed, you can expect lots of spice! My next big expedition will be the crossing of the Arctic Ocean via the North Pole. I plan on doing this next year with my Norwegian friend and fellow polar explorer: Borge Ousland. Until then, I plan on sailing around Asia and up north to Alaska to explore different remote locations along the way. You’re going to have to stay tuned to discover exactly what I’ll be up to.

You’ve crossed one of the Poles in your current « Pole2Pole » expedition with a stunning world record, what’s the plan for the second Pole and when?

As mentioned above, I plan on rallying the second pole next summer (2019). The idea is to sail as far north as possible up the Bering Strait with my boat Pangaea, then to be dropped off onto the ice shelf and make my way to the North Pole and cross over to meet my boat again on the other side near the Norwegian archipelago of Svalbard. The crossing should take us up to 3 months during which we except a lot of open waters given the summer season. We thus plan on equipping ourselves with rafts, paddle boards and impermeable wetsuits to secure safe progress between the floating ice shelfs we will encounter along the way.

When we traveled together across the Simpson Desert in Australia you mentioned that you’d like to concentrate future expeditions toward discovering the mysteries of the depths of the seas and oceans. Any updates you can give us on this?

No news on that front.