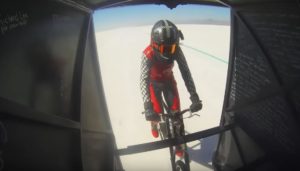 Clocking in at 183.93mph, Denise Mueller-Korenek has just set the world record for the fastest speed ever achieved on a bicycle.

How fast can you ride a bicycle? 13mph? 15? 20 if you’re really fit?
The fastest speed clocked by a cyclist in the Tour de France was by Rohan Dennisin 2015. He had a blistering 34.5mph average speed in the stage 1 time-trial.

How fast can you legally drive a car? Depending on the state you live in, most likely 65mph, maybe 75, or if you live in rural parts of Texas, up to 85mph.

Denise Mueller-Korenek, from Valley Center, California, just powered her bike to five times Rohan’s speed in the Tour de France, and twice that of the fastest legal driving speed in the United States.

On September 16th, 2018, clocking in at 183.93mph, Mueller-Korenek set a new world record for the fastest speed ever achieved on a bicycle.

Mueller-Korenek didn’t do this alone, though. Her custom bicycle was equipped with gears so massive that she needed to be towed to 100mph before she was capable of turning the pedals with her own power. She partnered up with Shea Holbrook, a professional racecar driver, at the Bonneville Salt Flats in Utah, to help her reach the minimum speed. A tow rope attached Mueller-Korenek’s bicycle to the back end of Holbrook’s dragster. Once the 100mph speed was achieved, the tow rope was released, and Mueller-Korenek took over powering the bicycle on her own until she reached her maximum speed of 183.93mph. While pedaling, she stayed within the slipstream just behind Holbrook’s dragster, so as to be protected from wind resistance so strong it had the capability of knocking her backwards off the bicycle.

In case of a fall, Mueller-Korenek’s body was protected with an eight pound leather and kevlar suit, as well as a motorcycle helmet and ski goggles. At speeds above 180mph, though, who knows if any of that protective gear would help if she were to crash.

Mueller-Korenek shattered the previous land speed cycling record of 166.94mph, which was set by Fred Rompleberg of the Netherlands in 1995. The Guinness Book of World Records currently publishes the world’s fastest bicycle speeds in separate male and female categories. So, with that in mind, maybe Fred Rompleberg will get to keep his World Record title of fastest bicycle speed set by a male rider. He has, however, lost the overall fastest speed title. The title of the overall world’s fastest speed on a bicycle now belongs to a female, Denise Mueller-Korenek.