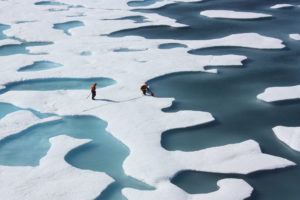 From melting ice caps in the Arctic to industrial pollution in China and India, Before The Flood, a documentary by filmmaker Fisher Stevens and actor and activist Leonardo DiCaprio is a sweeping look at climate change.

You can stream the film for free till 7th November.

Actor and environmental activist Leonardo DiCaprio and filmmaker Fisher Stevens embarked on a three-year long journey to document the human-caused impact of climate change. They explored the melting ice caps in the Arctic, flew over Canada’s oil sands, visited the Indonesian palm oil plantations, visited the industrial pollution in China and India, saw the dying coral reefs, and explored how human consumption has impacted the planet.

The documentary premiered on The National Geographic Channel on 30th October 2016, and has been made available for free viewing on a number of online platforms including YouTube, iTunes etc till 6th November 2016.