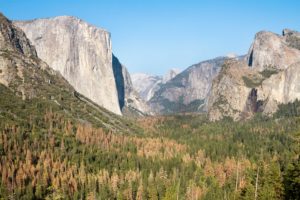 Yosemite Origins: How a National Park Was Born

With its steep granite walls and extensive valleys, Yosemite National Park is a mecca for climbers and all people who love nature.

Once filled in ancient ice fields, this is the story of how Yosemite got its name, and helped pave the way for the US National Park system.

We skipped watching a sunset over iconic Half Dome to watch climbers attempt El Cap instead. Binoculars in hand, we sat on folding deck chairs at the base of the giant slab of exposed granite, squinting up at the humans who were just dots on rock. Yosemite Valley is a mecca for climbers that has long attracted the best of the best, from famous athletes to dirtbags, as well as their enthusiastic supporters. Once likened to Eden by Nineteenth century travelers, the National Park holds the same draw for travelers today. It’s steep granite cliffs, tumbling waterfalls, and extensive meadows evoking a sense of our own minisculity in the grander scheme of the landscape.

It’s strange, but one of America’s great wildernesses was discovered because of man’s love for treasure. After gold was discovered at Sutter’s Mill in 1848, marking the beginning of the California Gold Rush, thousands of people arrived in search of fortune to Northern California. The Native Americans, who were already living there, were soon being displaced from their homes by miners. They retaliated by burning mining settlements during a period that’s now called the Mariposa War. One such conflict was between the Ahwahneechee tribe and a US Army Major named Jim Savage. Led by their Chief, Tenaya, the Ahwahneechee had burned down Savage’s trading post near the Fresno River. Angered by this, Savage led a group of men to what is now Yosemite Valley, seeking revenge. Savage and his men were warned not to go looking for the Ahwahneechee by other Miwoki tribesmen, who feared the Ahwahneechee people. They gestured towards the Valley repeating the same Miwoki phrase over and over again: ‘Yo he miti’, meaning ‘they are killers’. Savage’s mob misunderstood, and thought ‘Yosemite’ was the name of the valley.

Amongst Savage’s men was an Army surgeon named Lafayette Bunnell, who wrote a book called Discovery of the Yosemite, detailing his experiences during this time. He raved about the splendor of the valley. No gold was ever found in the area, but tales of Yosemite’s natural beauty spread far and wide, attracting the first tourists from around the country. Years later, Yosemite National Park also attracted a young Scotsman who had come to California in search of the natural world, after being almost blinded by a machine while working in a factory in Indianapolis. John Muir spent some time wandering amongst Yosemite’s granite walls and flower meadows, and like many before him, fell in love with the landscape. Muir took many influential people into Yosemite, including Robert Underwood Johnson, who was the editor of Century Magazine. Under Muir’s influence, Johnson published an article about how livestock was damaging the land – leading to the creation of Yosemite National Park in 1980. At the time, Yellowstone was the only other National Park in the world.

Muir’s passion also convinced Theodore Roosevelt, who became President of the United States in 1901, to visit him in Yosemite. Muir and Roosevelt became friends when the President spent a few days camping together in 1903. They were both outdoors men, though they had different opinions about what that meant (Roosevelt was a hunter, Muir was not.) Sometime, while camping in a cave near Glacier Point, Muir persuaded Roosevelt to draw up the legislation for Yosemite Valley to become a part of Yosemite National Park. Roosevelt went on to create five US National Parks during his tenure, and Muir went down in history as the conservationist who helped preserve Yosemite National Park.

Visiting Yosemite National Park today: Once the permanent home of dirtbag climbers, humans are now only allowed to remain inside Yosemite National Park for a week (mountain lions and other wildlife may stay all year, but the climbers have now taken to camping just outside the Park, and re-entering to attempt its granite.) Multi-day visitors will need reservations for backpacking and camping, but day visitors do not require a permit to enter the park.