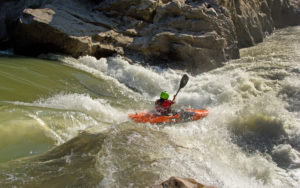 By sunset on the second day of our descent into the Kynshi River, two things were clear.

First, we discovered a true gem of a river with a variety of obstacles and some of the most breathtaking scenery anywhere in the world. Second, this 30-kilometre section would take more than the anticipated two days, and our food supplies were running out fast.

Big volume involves large features, such as waves and whirlpools. The moves kayakers have to make on such rivers require long, simple, slow and precise maneuvering to avoid the dangers and to keep on line as they paddle down the river. It’s certainly no place for beginner kayakers. The classic medium volume feature is known as the “boulder garden,” a set of rapids flowing through large rocks where kayakers will have to find a line through and sometimes avoid dangerous boulders. At other times, they may use the more suitable boulders to help navigation and stay on course.

Finally, there’s low volume, also known as “creeking.” Low volume takes place on steep streams and creeks and takes the kayaker to high-paced waterfalls and rocky slides. Picture a rollercoaster set in a river, but with a paddle and boat replacing the seatbelt and rails. Historically, India has been renowned for its exceptional Himalayan big and medium volume paddling. Many groups visiting India will warm up on the medium volume sections of the Beas (Himichal Pradesh) or Alaknandar (Uttarakhand) before heading to the famed big rivers, such as the Indus (Ladakh), Ganges (Uttarakhand) or Siang (Arunachal Pradesh).

Over the past few years, more kayakers have discovered India’s creeking potential. Kayakers have paddled a handful of tight Indian rivers, such as the upper stretches of the Teesta and Talung (Sikkim), the Kaveri (Karnataka) and the Nayyar and Bhilanga (Uttarakhand). And with the heaviest monsoon rains that fall on some of the most diverse mountain ranges in the world, India has much more waiting to be paddled.

I recently returned from a five-month trip to south Asia where a group of friends and I kayaked classic rivers and first descents in Pakistan, and then India and documented as much as we could (including videos). The plan was simple. Paddle some of the best big volume in the area famed for the best big rivers in world: The Himalayas.

We did learn, however, after ticking off some of the giants, such as the Gilgit in Pakistan and the Indus in India, that big volume can become quite repetitive. Therefore we decided on a change. I had always wanted to visit northeast India. Having travelled around the country twice before, I had seen a great deal but had never ventured any farther east than Darjeeling or Sikkim. A trip to Nagaland was the plan, but when we found out we might have to spend a few days obtaining permits, we had a quick re-think and chose nearby Meghalaya. We only knew three things about it: 1) Meghalaya was famous for being the wettest place on earth. 2) No one had ever kayaked in the state before. 3) No permits were required. Perfect!

We chose to paddle the rivers flowing off the southern ridge of the Meghalayan mountain ranges because they’re steeper than those in the north. Coming from the U.K., we often search out the steepest sections because they usually hold all the great waterfalls and slides; applying this theory to Meghalaya made perfect sense to us.

What we didn’t consider was that things can get too crazy.

On day two of a descent of the Umngot river, we came to what kayakers refer to as a “horizon line,” a line across water where you cannot see any farther due to a dramatic loss of gradient. This phenomenon isn’t uncommon when creeking, but this particular horizon line was bigger than any we had ever encountered. What followed was a set of backed-up waterfalls flowing through an inescapable canyon dropping 160 metres [525 feet] in gradient with no clear signs of letting up as it rounded the next corner out of sight. Because of the intensity and geology of the gorge, we were unable to find a route around the waterfalls and were forced to pull off the river. We spent the next two days dragging our 45-kilogram [100-pound] kayaks packed with camping gear and supplies through thick, steep jungle.

Lesson learned. We finished our trip to Meghalaya on a remote 30-kilometre [18.6-mile] stretch of the Kynshi River which drops at a more appropriate gradient than the Umngot. Our first descent of the Kynshi River was an incredible experience, but the water level was still too high in places, making many of the rapids too dangerous for kayaking. We completed the descent in three days, taking a day longer than anticipated due to slow walks around rapids. Fortunately, we arrived at the village of Ranikor just as we were getting hungry.

With no rain for two weeks, we decided to go back to the Kynshi River in hope of a lower water level. We were lucky enough to return to almost perfect conditions and we completed the full 30-kilometre [18.6-mile] stretch in three days (we had packed enough food for five days this time), only walking around four rapids. All the kayakers on the trip decided the Kynshi River was the best river any of us had been on anywhere. It had everything from beautiful surroundings in an isolated area to rapids perfectly designed for top-level kayaking. To top it off, there was warm water and beaches with readily available firewood for camping, and virgin streams for drinking water.

Members of our group had kayaked from Venezuelan jungle rivers to the monster waterfalls of Norway, through the Grand Canyon on the Colorado River in the United States, to the source of the White Nile in Uganda. We had also just spent the last five months doing nothing but kayaking across India and Pakistan. We knew the best river when we found it.

The Kynshi River was a great discovery for low volume whitewater kayaking in India, but the discoveries don’t end there. Groups of kayakers have started looking at India’s creeks, and with a growing number of talented kayakers from all over, there will no doubt be countless more finds over the next decade. It’s an exciting time for whitewater in India, and I know I’ll be back next year. I don’t want to miss out on the fun.

Craving some whitewater? Let us take you there at The Outdoor Voyage.

This article was featured in the very first print issue of The Outdoor Journal. Story and images by Joe Rea-Dickins.