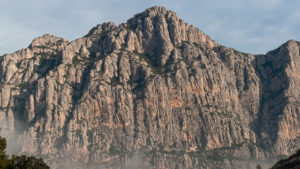 Apoorva Prasad, The Outdoor Journal Editor-in-Chief, recounts a climbing trip to Montserrat in 2009, where he followed in the footsteps of the mountain monks of Santa Maria de Montserrat Abbey.

A small boy scrambled up the rough rocks, yanking at tough brown shrubs and grabbing the pebbled conglomerate of the rocky Catalan spires. His sure-footed goats had already reached a large clear ledge above. He gasped with the effort and tried not to look down. It was late afternoon and he had to gather his flock and drive them homewards soon. He mantled up to level ground and looked around. There they were, near a large, dark-mouthed cave. He yelled at them, the stupid creatures. He spoke only Catalan, a language native to these wild, mountainous parts between France and Spain. And then, the woman emerged.

She was dark and luminous. She was haloed by light, a strange sort of energy exuding from her, illuminating the entrance to the cave. He felt something touch him, a sort of blessedness. And then he fainted.
So was born the legend of the black Madonna. Fast forward three hundred years. A large monastery and church stand on that ledge, surrounded by thousand-foot high spires of rock. There are two ways to the monastery – a winding mountain road, or a cable car. Today, like most days, the road is closed due to rockfall. The cable car has limited running hours – and we barely catch the last one up, with the lone operator holding it for us.
Montserrat – Jagged Mountain in English  – is a four-thousand-foot high plateau composed of reddish pebbly sedimentary rock needles that reach up into the sky, with holds that seem like they’ll pop out the moment you pull on them. Pinnacles emerge from the jumbled matrix, cliffs, and aretes that soar over the surrounding countryside.

More than a thousand routes spider the mountain. There are barely enough climbers here. When I was there, it seemed possible to spend a whole day climbing thousand foot classics without ever meeting another party – in near-perfect temps, even in February, the month of my first trip here. This is the warm, beating heart of Catalan mountaineering. It was a warm late February day, and we had been completely alone so far. The only other people we’d seen was a small group of climbers hiking ahead of us on the trail before they disappeared into the brush as we detoured towards the base of our route. Even though we were barely a 40-minute drive from Barcelona, it felt like wilderness climbing. The overgrown brush covered everything. It is an incredible sensation, to know that there is real adventure all around us, so close to established urban centres. There are ibex and wild boars in the forests in and around the mountain, and we walk carefully to not disturb the peace and natural beauty of this place.

The base of the route appears suddenly from the green brush. Vegetation ends and rock begins. The sensation is familiar and reassuring. The first part is not-yet-vertical, but real climbing nonetheless. I like to lead first pitches, since I haven’t yet had the time to feel scared and I can bluster my way through, while the ground seems reassuringly close – which in reality makes no difference to any real or perceived danger, of course. The route is mostly bolted or marked with old pitons, there is little scope for natural protection. Climbing slowly, we reached halfway up. I was belaying my partner Gilles, a Franco-Australian climber I had met some years ago in India. The route is considered the area’s classic and most popular climb – the 5.10a+, 11-pitch, 1033 foot (315m) Aresta Ribas. The Aresta – “arete” – first climbed by a certain Ribas in 1979, is the prominent spur of rock on the sunnier, south-facing side of the mountain – perfect for a winter climb. Despite its ranking, there is literally no-one else on the climb. For comparison, a 3-star multi-pitch classic like this one nearly anywhere in the United States or even in the French Alps would literally have a queue of climbing parties on it.

Suddenly, an old man in a blue sweater appeared to my right, climbing in what looked like sneakers. As I watched, their party of three appeared one after the other, traversing to our belay station, moving much faster than us. The leader was a younger man, the only one who spoke English. That was how I met Josep Castellnou, a local who told me stories of this amazing history of Montserrat. Josep, a vet from a nearby town, also managed rocktopo.com – a climbing site extolling the virtues of the natural park of Montserrat, with downloadable guides for each part of the mountain. [Ed: unfortunately the site is no longer online, but some topos are still available elsewhere].

“You are visiting here?” said Josep, casually while on lead. I was well secured in my belay anchors.
“Yes”, I replied, shielding my eyes from the sun while paying out rope to Gilles.

“Good!” he said, smiling. “But you will not know how to find the trail down. We will wait for you!” he exclaimed, before setting off again.

Their party was doing a route just adjacent to ours, and flying on it. I cherished such encounters in the mountains – in every way a normal social interaction, but between two strangers clinging spider-like to a vertiginous mountain wall. These meetings sometimes lead to lifelong friendships, and one can meet again decades later with the same sense of warmth and gratitude.

The climbing was unexpectedly difficult. The holds were rounded cobblestones emerging from a matrix of hard sediment, requiring you to balance your toes on rounded surfaces, with no real edges. I needed to think about footwork before making each move, which meant our progress was very slow. The route was series of spires stacked one upon the other. An immense panorama behind us gave me a massive sense of exposure, a feeling of stomach-churning, calf-tightening vertigo that kicks in when you can only see the air above, below and behind you. Eagles rode rising thermals, balancing motionless with outstretched wings on waves of invisible air. They nested on the cliff walls, and climbers were under strict instructions to leave certain areas and routes alone in this protected Park Natural de la Muntanya de Montserrat.

The climbing took nearly the whole day. We reached the top as the sun began to set. Gilles and I quickly began to coil the ropes and switch out our rock climbing shoes for hiking footwear – wearing rock shoes the whole day is an incredibly painful experience, for those who haven’t yet tried it. Josep and his party were patiently waiting for us at the top, just beyond and below the ‘summit’ of the arete. I was warmly surprised, they must have reached at least an hour before us. They smiled and greeted us again, and rather quickly now, given the fading light, led us towards climber’s left, towards whatever path there was. Within some minutes it became clear to me that we would have never found it on our own, especially in the dark. The trail down was a complex, hours-long scramble over water-worn rock and incredibly dense brush, and not really a proper ‘trail’. If we hadn’t run into Josep’s party, we’d have probably spent the entire night cautiously hunting for the way down, having heard enough stories of climbing parties lost on descents upon being cliffed out, or going over an edge in the haze of fatigue, in darkness.

A little while later Josep pointed out a cave.
“You see these caves? Monks used to live here and meditate. Now climbers use them. They spend the year just living here and climbing”.
So medieval Benedictine monks had faded away, replaced in this new age by climbers, similarly meditating on paths to salvation amongst spires reaching up to the sky. Who were these 21st century rock-climbing monks? I was eager to find out, but tracking these unknown climbing hermits, seekers after greater truths… was not going to be easy or feasible.
The sun had already set below the horizon, we were hiking down in the twilight, and could barely see the trail. Yet I paused to look inside the cave. It was a small nook in the rook, just enough to serve as a passable campsite sheltered from the rain, to lay a sleeping bag on the uneven ground, a mendicant’s bowl on a rock ledge, perhaps a worn book. For a second, I closed my eyes and imagined that life. Then I heard the group outside, patiently waiting for us to follow that hidden trail, and I stepped back into the fading winter light.