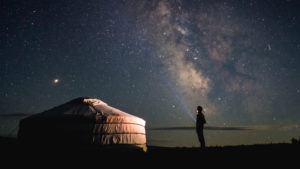 Book Review: Tales from the Trails

From the top of the world to the end of the earth, essays from a marathoner’s odyssey to compete on every continent and the lessons learned of friendship, life and pushing past borders

In the predawn moonlight, 65 adventure runners, wearing headlamps to hack through the darkness of the dense taiga forest and backpacks outfitted with provisions for survival in the probable—or at least, historical—event of calamity, gathered under a makeshift banner for the start of the annual Sunrise to Sunset Marathon in Khovsgol National Park in the far north of Mongolia.

Read next on TOJ: Solo Running in the High Himalaya

The course would be treacherous. Already a mile above sea level, it skirts the shores of Lake Khovsgol, known as the “Blue Pearl of Mongolia,” one of the most pristine and ancient lakes in the world, estimated to be between two to five million years old, before climbing another 2,400 feet to Chichee Pass. From there, the race heads south along a ridge, drops into a marshy river valley, then climbs again up to Khirvesteg Pass on an extremely narrow precipice, where a few years earlier an unfortunate runner suffered a spine-breaking fall.

“The pages of Tales from the Trails are packed with adventure.”

For publishing exec Michael Clinton, it would represent the penultimate challenge in a shared quest with his sister Peg to run a marathon on every continent, seven on seven—the first in London, followed by Buenos Aires, the Gold Coast of Australia, Philadelphia, Kilimanjaro in Tanzania and finally culminating in Antarctica. He chronicles these adventures, and aside misadventures, in an inspiring collection of personal essays from his latest book, Tales from the Trails, often with self-deprecating honesty and humor:

“My confidence was so sufficiently eroded that I wondered if I would ever be able to complete such a challenging course,” he writes in “Mongolian Madness” on the eve of the Sunrise to Sunset race. “All of a sudden, running Tokyo, a normal city marathon on flat roads, seemed like it would have been a much smarter choice! Maybe I hadn’t done enough research or focused on the details, but there I was in the middle of nowhere with nothing else to preoccupy my time except getting my head around how I would find the courage and stamina to conquer this newfound feeling of fear that permeated my whole being. …

It became apparent that everyone was feeling a bit anxious, evident when the gallows humor set in. Who would fall down the mountain? When we learned there could be wolves on the course, we identified who would be the most delicious runner to eat.”

For certain the pages of Tales from the Trails are packed with adventure and stories about the transformative power of confronting and overcoming challenges, both common and personal, mental and physical. But if would-be readers expect a book solely about running, they may also be surprised to discover a few pleasant sidetracks. Clinton’s brisk narrative pace makes ample time for an occasional “off the beaten path” anecdote, in true travelogue style, such as the all-out city sprint to find the last sports bra in Buenos Aires, or the matter-of-fact rationale for remaining calm in a Tasmanian rainforest whilst picking leeches from one’s private parts, even tricks to survive seasickness on a creaking Russian vessel crossing the Drake Passage.

In fact, with respect to some of the more poignant passages in Tales, running itself is nearer to a middle-distance metaphor, a means to facilitate connection, whether through introspection or a way of threading together generations of family, such as in “The Irish Surprise”:

“More than forty years since there had been any contact with our Irish family, my sister Peg and I decided to search for our roots there. It had all started with our decision to run the Dublin marathon, a stop on our quest to run races around the world from Mongolia to Argentina. Ireland was a natural choice since it was the birthplace of our paternal grandparents. Little did I know at the time that it would have a profound impact on me in ways I could have never expected.”

…or pausing for life’s precious and fleeting moments in “Time to Run for Your Life”:

“Life’s mantra should be to chase your dreams with a vengeance. What is important to you? Does your family want you to be an accountant, but your true passion is working with animals? Does your partner complain that he or she hates the idea of long flights, but your dream is to go on a safari in Africa?

Too many people argue they are too old to start running or to go back to school or change careers, yet there are countless stories of people who started running in their sixties, finished college in their seventies, or find an exciting third chapter that has turned their hobby into a business. Every single day that you ignore the deep dive into the depths of your soul, you are not being true to yourself, and that is what always matters first.”

The second half of Tales from the Trails is reserved for an elite group of contributors—Jean Chatzky, financial editor of NBC Today; George A. Hirsch, chairman of the New York Road Runners and former publisher of New York magazine, Runner’s World and Men’s Health; and Lucy Danziger, former editor-in-chief of Self magazine, among many other distinguished marathoners—each paying tribute to the motivational magic of this oldest and most basic human sport—running.

Tales from the Trails is available at major booksellers and online at Amazon and Barnes and Noble.