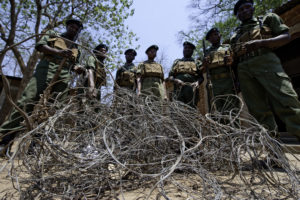 Snaring, The Silent Killer: Stories From The Bush

Zambia’s wildlife is incredible, diverse, and under threat. Consumption of bush meat and trafficking in wildlife products are reaching an all-time high.

“When most people envision the issue of “wildlife poaching” in Africa, they likely imagine the graphic scene of an elephant or rhino resting in a pool of blood, its tusks or horn hacked away, to be sold on the black market. What most people don’t think of is this: a little piece of wire. But these wire snares – loops of inconspicuous metal that constrict and trap the legs and necks of unsuspecting animals – are silent killers. Laid by poachers to trap and kill animals for the illegal bushmeat trade, snares are indiscriminate; antelopes, warthogs, lions, leopards, even elephants can fall victim to their grasp. It’s unknown how many animals die each year from snaring, but the number is easily in the tens of thousands.” Anna Kusler (ZCP/Panthera), Ben Goodheart (ZCP) and Dr. Kambwiri Banda (ZCP)

Located right in the centre of the continent, with an impressive 20 national parks and 34 game management areas, Zambia is one of Africa’s great wildlife destinations. Like most of Africa, Zambia is facing unprecedented poaching levels.

Since the 1950s, poaching has killed more than 90% of Zambia’s elephants. Elephant populations have declined from an estimated 160,000 in 1981 to just over 16,000 in 2015. The rhino population, which once stood at 12,000, was by 1998 declared extinct (with now only a small number of reintroduced rhino in North Luangwa National Park requiring round the clock surveillance). Zambia’s capital city, Lusaka, has a reputation as a hub for wildlife crime, with a thriving trade in weapons and wildlife products. According to the Ministry of Tourism, Zambia’s national parks continue to be affected by rampant poaching and continuous encroachment. Underfunded and under-resourced, law enforcement is struggling to fight back against these threats.

A beautiful male leopard sits on the riverbank in Kafue National Park, Zambia’s oldest and largest park. A small boat, from Musekese Lodge, drifts by. Passing the leopard, they see a wire snare twisted tightly around his leg, cutting painfully into the flesh. Reaching camp they report the matter to the scouts, who head out to look for him. The leopard is nowhere to be found. They search and search, even putting up camera traps in the hopes of spotting him. For six weeks there’s no further sign of the stricken leopard. The next time he is seen he’s up a tree.

Having relocated him, Musekese makes a call to the Zambian Carnivore Programme (ZCP), to see if it’s possible for their vet, Dr Kambwiri Banda, to come and dart the leopard and remove the snare.  ZCP is a non-profit conservation organisation operating in several of Zambia’s National Parks, where they work to protect large carnivore species including wild dog, lion, cheetah, lion, leopard and hyena.

Even though he’s on leave in Lusaka, five hours drive away, Dr Banda immediately sets off for the park. In the meantime, it’s important they don’t lose sight of the leopard again before he arrives.

Musekese staff and a Department of National Parks and Wildlife (DPNW) scout, stay in a vehicle, nearby the tree, a keeping an eye on the leopard, while they wait. At sunset, just as it starts to get dark, the leopard climbs down from the tree. He’s clearly in considerable pain. Unable to put any weight on his front foot, he can’t walk far or fast. Every few steps he needs to stop and rest. It gets dark. They lose sight of him. Fortunately, the vet and team arrive and, after an hour spent searching, with two vehicles and spotlights they find him hiding in a gully.

Darting the leopard, he goes down and they quickly get to work. The snare has been in place so long that the skin has already grown over the wire. It is not an easy job to remove it. They will have to pull the wire out of his flesh. After some manoeuvring, they manage. Reversing the tranquiliser they wait for several hours until the leopard wakes up and recovers from the drugs. It’s important the team remain with him until he’s fully awake. A drugged animal is extremely vulnerable. Knowing there is lions in the vicinity the team need to ensure his safety. Lions can easily kill a leopard who doesn’t have their wits about him. Around midnight, once the leopard has been assessed by the ZCP team, they leave him to it, returning early the next morning to make sure he has moved off of his own accord. They can only hope he will make a full recovery and regain the use of his paw.

Zambian Carnivore Programme (ZCP) works with the Department of National Parks and Wildlife (DPNW), Conservation South Luangwa (CLZ) and Panthera, to tirelessly monitor and protect the large carnivores in Zambia’s wilderness areas. ZCP fit radio collars, fitted with GPS transmitters, to animals in the areas in which they work. These collars allow ZCP to monitor the animals and their prides, packs, clans, and families. Combined with intensive on-the-ground monitoring and extensive de-snaring efforts, radio collars provide protection for hundreds of lions, cheetahs, and African wild dogs. The data collected also provides vital population information about things like hunting grounds and denning areas where the animals raise their young. All this helps ZCP decide which areas are most in need of protection, and helps determine which areas to deploy anti-poaching units for patrols and snare removal, creating a “halo effect”… a halo of safety, where the animals need it most.

Late one afternoon in July, a female elephant is reported by Wildlife Camp, South Luangwa, with a cable snare tight around her chest. The cable has not yet caused an open wound, indicating it’s fairly recent, but it has started to cause some oedema and she’s in pain. A couple of mornings later she is spotted again, this time by Zambian Carnivore Programme and immediately the team jump into action.

As she is in a herd of 10 elephants, they need scouts and vehicles for support, as she will need to be immobilised and the rest of her herd will need to be chased away as she starts to succumb to the drugs. Elephants try to help family members in distress and will often attempt to lift them up, or form a tight circle around a fallen one, all the while, understandably, becoming increasingly defensive and aggressive towards a ‘rescue’ team. Fortunately, the herd are relatively calm and well behaved. Once the dart was in, the elephant is down just 10 minutes later.  The herd do attempt to come in to protect her, but the team are able to push them away, with skills they’ve learnt after many years darting snared elephants from big herds. Four scouts stand guard, watching the nearby elephants, who periodically attempt a charge. The rest of the team under the leadership of Dr. Mwamba Sichande and Dr. Lengwe Bwalya get to work removing the thick cable, keeping her cool and monitoring her breathing. The whole operation is done in 15 minutes and she’s up on her feet again and reunited with her family.

“Snaring is wildlife’s silent killer which quietly kills thousands of animals in the Luangwa Valley annually. CSL tries to combat this by deploying regular anti-snaring patrols to remove snares from the bush and by immobilising and rescuing snared animals.” Conservation South Luangwa

South Luangwa National Park, in eastern Zambia, covers an impressive 9,050 square kilometres of game-rich territory. Conservation South Luangwa (CSL) is an NGO who work both with the local community and with conservation partners to protect the wildlife and habitat of this incredible park. South Luangwa is no stranger to poaching, particularly indiscriminate snaring. Snaring in the park normally increases during the dry season and CSL are expecting the same this year, particularly with tourism having been hard hit by the COVID 19 pandemic. In July this year alone, three animals had to be desnared by a joint team from the ZCP, CSL and DPNW.

CSL supports 65 well trained and equipped, highly disciplined scouts, who daily risk their lives in the fight against poaching. Sometimes spending up to 20 days in the field on patrol, in tough conditions and working tirelessly to protect the animals of South Luangwa. Without these anti-poaching operations, including anti-snaring patrols, field patrols and investigations, wildlife figures in South Luangwa would most definitely decline.

CSL, together with ZCP and DPNW, have recently introduced a new initiative into the South Luangwa… community game drives. With funding from Lion Recovery Fund, five-game drives a week take local community members into the park. Showing wildlife to people who have never experienced before and talking about the benefits of conservation and advocating anti-snaring. This scheme ensures that people who live closest to the park can experience it. It also provides an income for guides and drivers who would otherwise be unemployed during this lack of tourism, driven by COVID   Additionally the drives ensure a constant presence in areas where there is a high risk of snaring; in a normal year, it is the guides, drivers and tourists who see and report a high percentage of the snared animals.

vA young male giraffe was first spotted in April with a snare around his rear leg, but rescuers were unable to reach him due to his difficult location and limited access during the wet season. Almost four months later he is spotted again, this time by Zambian Carnivore Programme, late at night. A team goes out at first light to try and locate him. He has a severe snare wound on his rear leg and an old snare wound on his front leg, which will also needed veterinary attention. Some of the joint CSL, ZCP and DPNW team are new to bringing down a giraffe, so, given the size and power of a giraffe’s legs and the fact that he will be fully awake whilst being worked on, some additional training is quickly done!

The giraffe is darted by Dr. Mwamba Sichande and the snare is removed from his rear leg. The wound should heal, but he will certainly have some lameness for the rest of his life. Fortunately, it appears that the snare on his front leg had worked itself off at some stage. Once the de-snaring is done he is released and has a good chance at surviving, having done extremely well to come this far.

Africa’s population is projected to double in size by 2050, and with growing habitat fragmentation, habitat loss and poaching, the future looks bleak if conservation is taken out of the equation. Thanks though to the tireless efforts of organisations like Zambian Carnivore Programme and Conservation South Luangwa, wildlife still has a fighting chance.

For more information or to make a contribution visit www.cslzambia.org and www.zambiacarnivores.org.