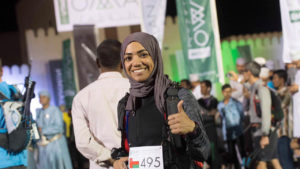 In a country where mountaineering falls far outside the traditional gender purview of women, Oman's Nadhirah Alharthy is poised to become her country’s first female to ever summit Everest.

The frigid 8,848-meter summit of the world’s tallest mountain is an environ as opposite from hot, arid Oman as imaginable. But Nadhirah Alharthy is enlivened by the gnawing cold and high-consequence terrain of the Himalayas. In 2018, the Omani woman attempted Nepal’s Ama Dablam, a 6,812-meter precipice with a reputation as a training ground for Everest hopefuls. Just shy of Ama Dablam’s exposed pinnacle, she gazed across the ice-choked valley at the Everest Massif, her eventual goal.

Two years ago, she met Khalid al Siyabi, who became the first and only Omani to tag the peak in 2010. “I want to summit Everest, too,” she recalls telling al Siyabi. In Oman, mountaineering falls far outside the traditional gender purview of women, but al Siyabi sensed the depth of Alharthy’s ambition. “Alright, let’s do it,” he replied.

In Oman, mountaineering falls far outside the traditional gender purview of women.

The 42-year-old is not an obvious candidate to be her country’s first female to crest the world’s tallest mountain. Alharthy grew up in rural Oman and moved to the capital of Muscat to study education and social sciences. She received a master’s degree in geography with an emphasis in geomorphology; her research analyzed road damage due to flash flooding.

Read about the wider Dream of Everest expedition, along with regular updates from Everest here.

Post-graduation, Alharthy landed a position at Al Amal (“The Hope”) School in Muscat and as a coordinator with NASA’s Global Learning and Observations to Benefit the Environment (GLOBE) program, which is an international effort to crowdsource atmospheric and environmental data. Through GLOBE, Alharthy led a team of students up Tanzania’s Mount Kilimanjaro to collect hydrological measurements in 2015. The climb of Africa’s tallest peak was her first experience with altitude, but the native Omani acclimatized to the challenge and returned to the Arab peninsula with a nascent craving for more. Back in Oman, Alharthy threw a finger to the pulse of the nation’s climbing scene as her fledgeling mountaineering thrill fermented into an intoxicating ambition: to summit Everest.

Fate would push open the door Alharthy had cracked. It was after Kilimanjaro that she met al Siyabi, who saw room for an Omani woman on the roof of the world. Alharthy began to prepare per his instruction; she was a “gym regular”, but Everest training pushed her into uncharted depths of the pain cave. What does it take to develop a mountaineer’s inexhaustible cardiovascular engine? Alharthy describes her regimen as “endurance-based”, with hiking, climbing, and swimming peppered throughout her week. For anyone without an athletic background, 2+ hours of intense aerobics is arduous‒to Alharthy, it was “a gift to myself for my upcoming 40th birthday, to prove that I could push my limits”.

In late November of 2018, she used the gruelling 137-km UTMB-Oman ultra-trail run as a measuring stick of her training progress. Despite dropping out of the race after 90 kilometers, Alharthy evinced considerable fortitude on the grinding, technical course in the remote wadis of Jebel Akhdar.

Whether training on chossy mountain trails, desert dunes, or on the paved roads of Muscat’s oven-like 33°C (91°F) heat, Alharthy is bound by Islamic Sharia law to wear the hijab. Proponents maintain that the headpiece allows wearers to retain their modesty, celebrate their religious or cultural identity, or exercise freedom of choice. Critics have called the garment an instrument of female oppression symbolic of the barriers that have kept Himalayan summits out of reach for many hijabi women. Alharthy knows that to some Omani, her pursuit of mountaineering is preternatural and improper, but she has never felt that the hijab restricts her opportunities.

“…I recognize I am carrying a message when I am climbing: if you have a dream‒even if it is hard or takes a long time, even if you must convince those around you‒you can do it.”

When Alharthy broke the news of her aspiration at school, there were a few sceptics, but most of her co-workers were encouraging. Full disclosure with her family, however, was more emotional; after training in secret for two entire years, Alharthy had to address the concern of her parents. But they’re unnerved by the danger of the ascent, not their daughter’s gender-defying pursuits. “They think that Everest is a death-wish,” she laughs. “I’m convincing them that both the technology and my ability level are there.” In short, her Everest aspirations have been largely well-received in a country where women have only recently made inroads into male-dominated activities. Images have power, and the significance of a hijabi Arab woman on top of the world is not lost on Alharthy, who noted that initially, she trained for individual fulfilment. “When I began, I was focused on a personal accomplishment,” she recalls. “But I recognize I am carrying a message when I am climbing: if you have a dream‒even if it is hard or takes a long time, even if you must convince those around you ‒ you can do it.” Sporting a hijab and an indomitable spirit, Alharthy will trumpet her message from the tallest podium known to man or woman in May of 2019.