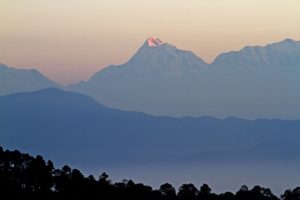 Litigation against mass trekking operations has led to a ban on nearly all mountain tourism in Uttarakhand, leaving 100,000 jobless and an industry without a future. But this doesn't solve the problem or punish those responsible.

In a recent hearing at Nainital, Uttarakhand’s High Court banned overnight treks at alpine meadows across the state, one of India’s most important Himalayan destinations, and limited tourism to 200 visitors at a given time, citing ecosystem preservation as its rationale. The ban is an overactive reflex to recent trekking accidents that have resulted in deaths, as well as a mounting degradation of the Himalayan ecosystem due to mismanaged waste.

The impact of this ban is massive. An average 200,000 trekkers visit Uttarakhand each year. Some of India’s iconic Himalayan peaks are in this state, many of which have seen world-famous ascents, such as the epic ‘Meru Sharksfin’ climb in 2011 by American climbers Jimmy Chin, Conrad Anker and Renan Ozturk. Dozens of trails, treks and natural sites are renowned internationally, and have been the subject of books and documentaries. This includes the mysterious Roopkund glacial lake, now a critically degraded high-altitude trek, linked to the initial litigation. Over 2,000 adventure companies cater to this visitor demand by employing guides, porters, cooks and other staff while contributing to local hotels, transportation and village tourism. Now, all of the sudden, these people who depend on mountain tourism are out of work – with no attempt made to solve the actual problem of poorly managed mountain tourism.

Now, all of the sudden, these people who depend on mountain tourism are out of work.

The Indian Himalayas, as well as the lower, southern ranges and forests, have always been stepped in history and legend. With the opening of India’s economy from the late 1990s onwards, a new generation finally started having the financial ability to explore these mountain regions recreationally. Constantly growing numbers of young Indians are keen on getting into the outdoors for the first time. These young enthusiasts, so eager to capture an adventurous looking selfie for their Instagram feeds, are not adequately educated, prepared or aware of environmental issues. According to Vaibhav Kala, Founder of Aquaterra Adventures and Committee Chairman of The Adventure Tour Operators Association of India, “with no ethical understanding of ‘Leave No Trace’ principles, and scant overall outdoor experience, first-time trekkers began to tramp trails high and low.” When deciding which operator to book with, low-priced tours look appealing to them because they are ignorant of environmental logistics. They’re not able to recognize a poorly run tour with improper carrying capacities within ecological sensitive zones, unsanitary toilet ratios and hazardous waste management.

Akshay Kumar, CEO of Mercury Himalayan Expeditions for over 20 years and a previous president of ATOAI, has also been outspoken about the dangers of mass trekking in India. “Unfortunately with the boom in the domestic adventure travel market, India has witnessed an uncontrolled growth that has reached dangerous proportions. Mass trekking, overcrowded trekking routes, piles of garbage on the trail, low-cost camping and complete disregard for safety and environment, eventually leading to accidents, deaths and destruction of our Himalaya”, he said in a recent LinkedIn post.

The influx of nascent trekkers has led to recent deaths over the 2017 and 2018 climbing seasons. In hindsight, many of these tragedies appear preventable due to treatable issues such as poor health monitoring under extreme conditions and general inexperience.  Vipin Sharma, founder of Red Chilli Adventures, who has been guiding treks for over 20 years, can spot this inexperience from a mile away. “Before these companies entertaining mass tourism came into the picture, we never heard of anyone dying while trekking. It is ‘soft’ adventure; you don’t expect people to die. It’s not the same as serious mountaineering. The reason why it happens is because the companies don’t pay attention to safety standards and sanitation, and target people who have never trekked before who end up showing off and taking pictures,” said Sharma in an interview with The Outdoor Journal.

At the same time, due to weak regulations and poor governance, several blameworthy operators are taking advantage of the situation by running poorly managed, poorly executed trips in large numbers with zero regards to safety standards or the environment. These few culpable trip-runners are creating havoc for the good actors that promote responsible tourism; as well as for their clients, who are dying. In addition, the environment suffers under the weight of mass traffic and tourism into its pristine ecological zones.

“Only one forest guard sits at the head of the trail and collects money for camping, and keeps no check on what people are doing.”

Over the past two decades, Sharma has noticed how the influx of mass tourism degrades the camping grounds. “With fixed camping, you’ve got lots of people in one place. It’s only the people who move, while the tents and food rations stay in one place. If anyone gets a chance to look around these tents in the camping area, it’s all filthy and full of human waste and garbage. Traditionally, not more than five to ten people move from one place to another, with their stuff AND garbage, and camp only for a night,” says Sharma.

First-time trekkers might not realize the increased danger these imprudent operators pose. Budget tours offer inexperienced guides, with fewer guides per trekker. They lack proper safety equipment and training. The quality of food is questionable. And the low ratio of toilets to guests poses health concerns and ecological damage.

In addition to safety concerns, the reckless operators are harming the mountain ecology. Fixed camps damage the ecosystem. And poor human waste and garbage disposal is deleterious to the overall environment and impacts any future trekking experiences.

Impact of the Ban – Overbroad

Due to a lack of action by India’s government, the judiciary stepped in to impose a blanket ban on all adventure activities above the treeline. On the heels of an Uttarakhand rafting ban due to mass tourism concerns, the judgement is partly in response to a public interest litigation (“PIL”) filed by a local society, registered in one of the worst-affected regions, against the State of Uttarakhand. The litigation sought the removal of permanent cement structures and the cessation of commercial grazing, but not a complete ban on overnight treks.

The overbroad ban renders all those involved in adventure tourism and mountaineering expeditions immediately jobless. The high court offered no timeframe for baseline standards to lift the ban. Thus, the livelihoods of over 100,000 people depending on mountain tourism have no timeline for recovery. It also doesn’t do anything to address the core problem – some operators simply began to promote treks in neighbouring regions that the Uttarakhand court has no jurisdiction over (80% of the Himalaya are in India, spanning 12 states).

According to the Adventure Tour Operators Association of India (“ATOAI”), the capricious judgments that arrest overnight trekking activities “are not only affecting the socio-economic health of people of Uttarakhand but also to the reputation of tourism of the state of Uttarakhand.”

Trekking in the Uttarakhand provides a deep cultural and spiritual connection for Indian people.

The ATOAI also feels that the court’s orders are going to thwart future generations of climbers, in a state known for one of India’s top mountaineering schools, and for raising the most Everesters in the world. “What are we going to tell the youth and future climbers of our country who graduate from the Nehru Institute of Mountaineering in Uttarkashi, Uttarakhand? That you can learn to climb but you can never climb at home, that your state does not permit this sport?”, the ATOAI asked rhetorically in a Press Release.

Read Next on TOJ: A Woman’s Account of a Mountaineering School in Kashmir

Trekking in the Uttarakhand provides a deep cultural and spiritual connection for Indian people. Every 12 years, thousands of pilgrims attempt the 280 km trek across Uttarakhand, passing through the alpine meadows and performing ritual ceremonies. Although it’s considered to be one of the toughest pilgrimages in the world, this year, over 10,000 devotees made the attempt.

The High Court’s blanket ban is too broad – it will force tour operators, workers, hoteliers and villages to migrate, without addressing the core problem of mass trekking operations in a growing economy by unscrupulous actors. Instead, Uttarakhand’s state government should be given the reigns to manage the situation correctly by permitting responsible tour operators and disabling bad actors. Certainly regulation, along with regular education and training can reduce the degradation to the alpine meadows associated with tourism.

“What we need is a policy of “leave no trace behind.” There should be a cap on the number of people allowed on each trail and fixed camping shouldn’t be permitted. Additionally, we need stronger monitoring. Right now, there is only one forest guard who sits at the head of the trail and collects money for camping, and afterwards keeps no check on what people are doing. We need well-defined rules and strong monitoring to ensure that the rules are being followed. That’s the only way we can keep our mountains beautiful,” shares Vipin, who takes less than ten people on each trek and never camps for more than a night.

Further, in addition to regulations at the government level, change can come about with personal choices. Kumar points out the need for “Regulations, control and above all to create awareness with the consumers that it is their responsibility to choose well when selecting a route, activity or operator.”

The Uttarakhand government is now preparing to appeal against the state High Court’s judgment in India’s Federal Supreme Court. Thousands of people are depending on the Supreme Court to recognize the arbitrary and capricious nature of the blanket ban and overturn the ruling. For more updates, check in with The Outdoor Journal.

Written by The Outdoor Journal’s Dave Braun, with additional reporting by Jahnvi Pananchikal and editing by Apoorva Prasad.