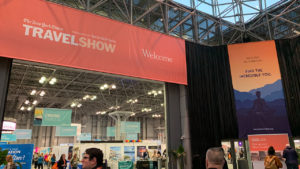 The New York Times Travel Show: Beware an Astonishingly Out of Touch Industry

On Friday, 25th January, The Outdoor Journal attended an industry event that left us infuriated at "expert" panels bereft of expertise, or possibly even honesty.

The New York Times Travel Show is a marquee event, held at the Javits Centre in Hell’s Kitchen, New York. According to the Travel Show website, they boast 560 exhibitors, 30 thousand attendees, 280 speakers and 100 cultural presentations from around the world. The exhibitors in the main hall, representing either countries or operators know their stuff and speak with passion. However, the same could not be said for the seminar that we attended downstairs, with an “expert” panel targeted specifically at the travel media industry.

This was far from “expert”, this was out of touch, damaging and ultimately, either unknowledgeable or dishonest.

This week, The Guardian questioned the future of digital journalism as BuzzFeed and HuffPost laid off 1,000 workers. Elsewhere, The New Yorker also asked this same week “Does Journalism Have a Future?“. Travel media should not be immune to concerns shared by the rest of the journalism and editorial media business.

This opening seminar of the event was entitled “Focus on Travel Media – The Future of Travel Journalism”, yet nothing regarding the huge talking points that are making headlines in mainstream media at the moment appeared to be open for discussion. 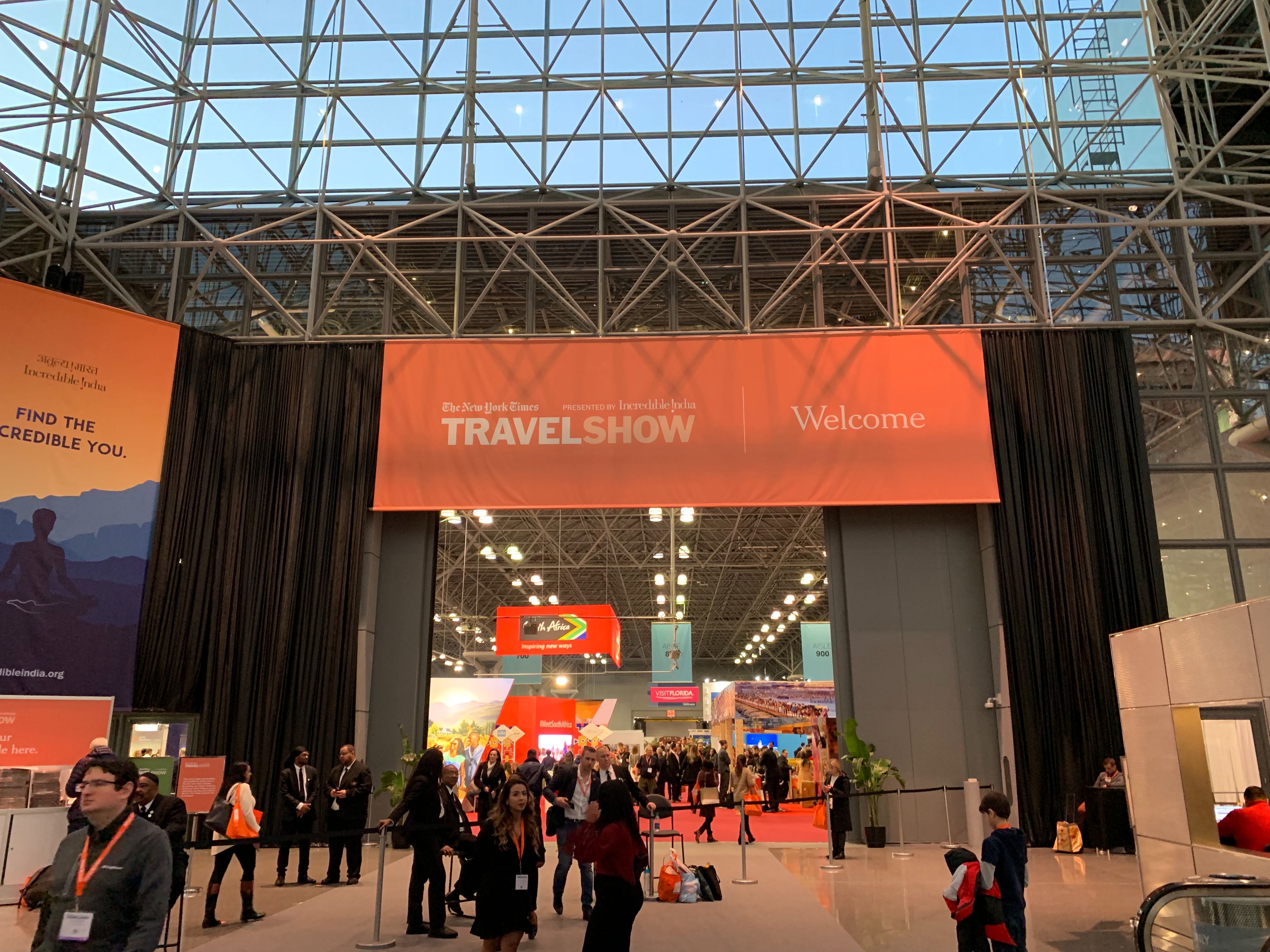 On four separate occasions, we left the conference room because we couldn’t bear to hear anymore, only to feel a need to return out of morbid curiosity akin to the feelings evinced by a horror film, to squirm some more. We returned because we knew that we must. This “expert panel” was feeding misinformation to an enthusiastic audience, who wanted nothing more than to find personal success in the travel industry. We needed to cover it. The panel spoke of a rosy world, where anything is possible and making a living doing what they’re doing required just a little practice, perseverance and creativity. This was far from “expert”, this was out of touch, damaging and ultimately, either unknowledgeable or dishonest.

The session lasted for two hours, with a six-person onstage panel of so-called experts.

In the first hour, everyone on stage was given a period of time to talk about some area of focus within the travel industry. Presumably, the brief was “Focus on Travel Media – The Future of Travel Journalism” given the title of the seminar, although you would never have known it. Most just talked about their own publication, sometimes with a little obsequious praise thrown in for fellow panellists. It got so bad that it wasn’t long before an incredulous member of the audience stood up and instead of asking a question, reminded the panel of the name of the seminar.

There were a couple of exceptions on stage, and some valuable information was offered, such as that from Andrew Sheivachman, the Senior Editor of Skift who shared the below infographic. However, after offering his introductory piece, and despite speaking eloquently during his alotted opening remarks, Mr. Sheivachman sat very quietly for the remainder of the two hour period, perhaps aware of the laughable proceedings that surrounded him.

The second hour was offered up for questions for the audience, and subsequently, a long line formed behind a microphone set up in front of the stage. Audience members diligently lined up to effectively ask the panel the same self-centered question, again and again in many different ways: “how do I achieve success (as a travel writer/journalist/blogger/influencer/latest-trend-setter)?”.

While the questions themselves may have been tiresome, and honestly a little concerning, the lack of intelligence on offer by the panel was shocking and infuriating. 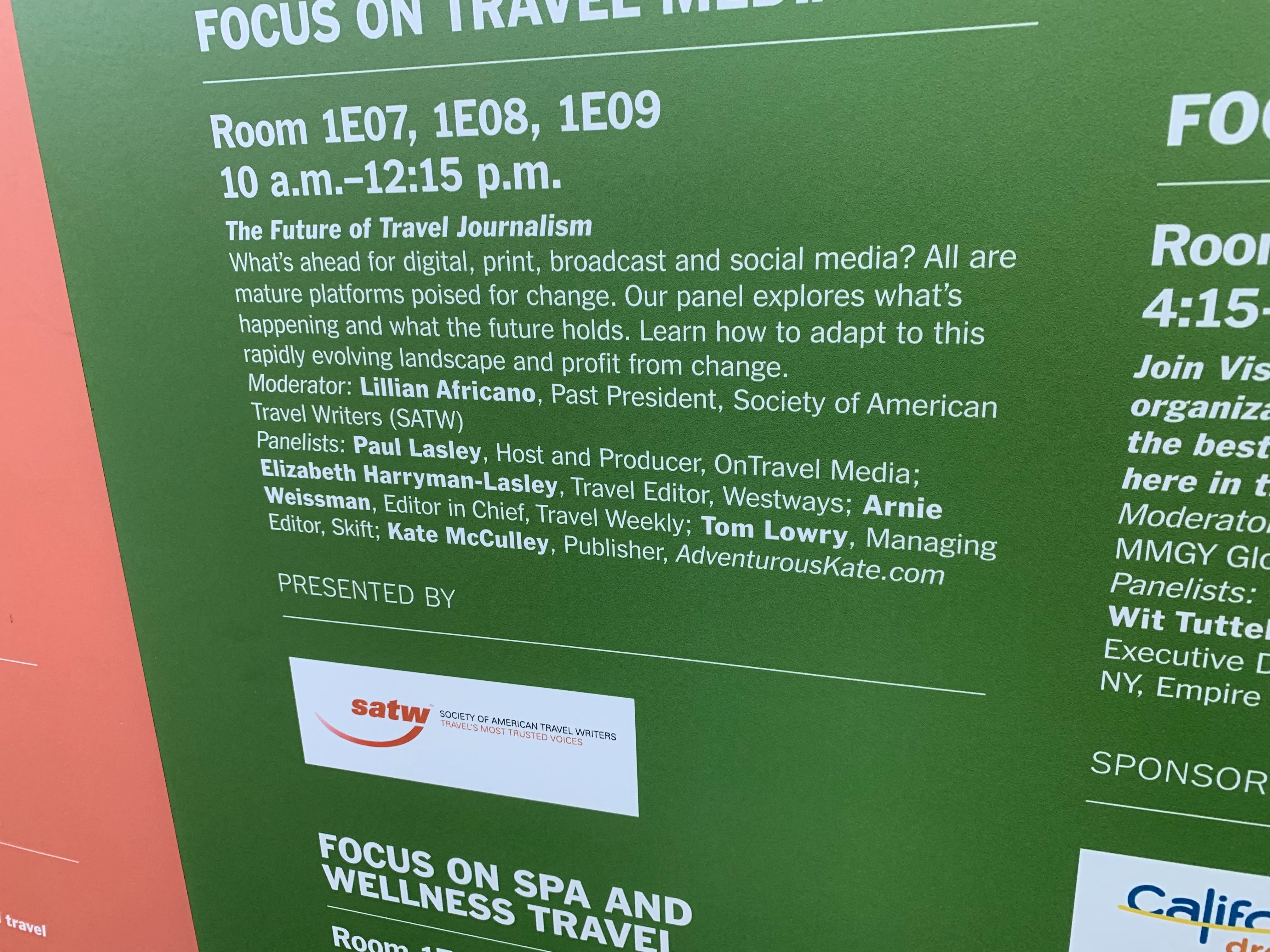 There was one moment in particular that almost left us in a state of shock. A woman stood up and asked a question that many social media users around the world are now asking themselves. It is an important question that deserves an honest answer from those who are framed as “experts” in the industry.

The petitioner told the panel that she was attempting to visit every country on Earth. She had, so far, made it to 122. Yet she struggles to show growth in followers to her social media accounts.

“The influencer marketing industry is now worth billions, but estimates show up to 25% of influencers have paid for fake followers from illegal bot farms“

There was a quick retort from “Adventurous Kate” as the resident influencer on the expert panel. “Are your photos good?”
“Yes, I think so”, replied the lady. Another member of the “expert” panel offered this woman further advice. However there was more before the lady was allowed to sit down, “Adventurous Kate” had thought of something else. Visiting all those countries, “It’s not that impressive, it’s not that original”, Ms Kate told the supplicant.

The woman asking her question was clearly a little taken aback. She then told Adventurous Kate that 15 women had previously visited every country on Earth, meaning that it remained a fairly rare and unique travel achievement.

“Still” replied Adventurous Kate with a shrug of the shoulders. Perhaps Kate was just jealous that this woman had been to 45 more countries than she had (according to Kate’s website)? She added, “It’s not a good enough story, or maybe your photos aren’t good enough,” adding further “advice”.

Not one word was brought up by the “expert” panel about social media spends, fake followers or the fundamental fact that any new wannabe influencer today, authentic or otherwise, is competing against accounts that buy followers. SocialChain, one of the world’s most notorious social-first marketing agencies, recently reported that “The influencer marketing industry is now worth billions, but estimates show up to 25% of influencers have paid for fake followers from illegal bot farms“. It’s not just immoral, but given brands are expected to pay these “influencers” between $5 and $10 billion in 2020, it amounts to fraud.

Social Chain’s initiative has solidified into like-wise.co, and if you’re an influencer, we encourage you to sign up on their website.

However, there’s still more. You could have a million followers, but without social spend, changes to social media algorithms mean that you can sometimes only expect to reach 2% of them or less organically.

This demands an answer: what are brands, operators, and official bodies paying for? They should be very careful. Brands should either be sure that the influencer can offer them the exposure that they’re selling or instead invest money into a personality whom they believe in without preexisting follows, via social spend.

This is just one of many important topics to discuss within travel media. “Focus on Travel Media – The Future of Travel Journalism” at the New York Times Travel Show managed to dodge almost all of them. If people hadn’t paid to attend and scarily seemed to have taken this “advice” on onboard, then it would have been laughable. Another audience member simply shook his head when we asked him what he thought.

To repeat ourselves, this was not a wider reflection upon those in attendance, upstairs the exhibitors were great to talk to, but the level of content on offer via the seminars was disrespectful to an audience that clearly expected more intelligence.

Finally, a quick mention for the woman who stood up asked the question and was told that her story wasn’t good enough. The Outdoor Journal spoke to Janice Lintz after the seminar, who went on to share her story with us. It wasn’t just good, it was incredible, authentic and genuine – worthy of following. A story that includes speaking out against domestic violence at the height of the #MeToo campaign, a publicised divorce, beating cancer and a complete change of lifestyle to embrace travel.

In the coming weeks, we will publish that story at OutdoorJournal.com, but for the time being, we encourage you to give Janice’s Instagram account a follow here. We’ll be supporting her journey all the way.

Since this article was published, we have since shared Janice’s story – A Passport To Freedom; Following Domestic Violence, a Publicised Divorce & Cancer.

Correction: The Outdoor Journal has updated this page, we previously listed Tom Lowry, Managing Editor as the Skift representative at the event, as per the official event documentation. In reality, Andrew Sheivachman was in attendance on behalf of Skift, as Mr. Lowry was unable to attend.