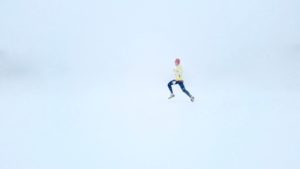 When the Weather Outside is Frightful

How an always-cold runner makes it through the white season.

One of my many character flaws is that I am always cold. My comfort range hovers between 84 and 87 degrees Fahrenheit. When I am cold and miserable, which, given the narrowness of my spectrum, is often, I tend to announce that status to the world. Once, I was walking with my friend Sage on a later summer night. She said, “I’m cold.”

At the time, Sage was six years old.

When I go out to dinner, I’ll order a martini, or a glass of nice wine, and I’ll also ask for a cup of hot water and lemon.

When I moved to Durham, North Carolina, at age thirty, I was a black-clad cigarette-smoking Manhattanite. then I fell in love with a man who ran and I became a runner. Growing up I’d been more of an egghead than an athlete, and didn’t fancy myself much of an outdoors person. But in Durham, I learned to wear more sensible shoes and to push my physical limits. When I traveled to the beach, I ran on the beach and liked it. When we visited the mountains, I ran on trails and loved it.

From my office on campus I would go out for runs in the middle of the day in the middle of summer. Even though I am not generally a prolific sweater, in 90-degree heat with 90% humidity, I would be able to wring big puddles of salty water from my shirt and shorts. The heat made me looser, floppier. I may not have been running as fast as I could when it was cooler, but it was never hard to change into shorts and a t-shirt and get out the door.

The winters were mild enough that I could usually get by wearing tights and a long-sleeved shirt, though I often overdressed, and comfortable for the first mile, would risk overheat- ing for the rest of the run.

Then, nearly ten years ago, I moved west, to a state about which I knew virtually nothing except that it was big, sparsely populated, and cold. When, in June, I met my first native Montanan, she told me with a satisfied smile that Montana has had snow in every month of the calendar year, and pointed to the white-capped peaks just outside of town. On the cattle ranch where she grew up, on the wind-swept plains of the eastern part of the state, she said winters got so cold the cows’ tails and ears would freeze and snap off. She laughed when she said it.

By the time I moved to Montana, I had become an ultramarathoner and considered myself pretty fit. I have the lean build of someone who is, by virtue of activity and biology, on the slight side. After a week in Missoula I felt like a big fat lazy slob. I met a bunch of runners, who, after we did two or three hours on tough, mountainous terrain, would ride their bikes for another five. And then they’d swim. Or paddle. Or climb. I’d lie around on the couch and read a mystery novel.

The first time there was a giant dump of snow—overnight a foot of the fluffy white stuff fell on the streets and the city didn’t bother to plow—I assumed the university would cancel classes. Oh no. Everyone has cars with high centers, snow tires, and knows how to turn into a skid. Everyone except me. My car got piled under feet of snow for most of the winter while I trudged to work bundled like the Michelin man, chattered my teeth and asked the heavens, “What kind of person lives in a place like this?”

My friends. My friends thrill to the change in seasons. They shift their focus from running to skiing. Many of them own more pairs of skis than they do shoes. Alpine, Nordic, Randonee, AT, skate skiing—at first the words meant nothing to me and the connotations were not positive. I remembered, as a kid, spending what felt like days going up on the chairlift to ski down in what felt liked seconds. I remembered being married to a man who loved to ski, and tolerated vacations in Italy, Switzerland, Utah and Colorado, where I’d wake up each morning with the anticipatory dread of having to stuff my feet into the prisons of ski boots and face another day of not enough oxygen and too much cold.

In my life in the west, no longer married and in charge of my own leisure time, I would not, I swore, capitulate to the consensus among hardier folk that winter was a good thing. I bought metal treads for my running shoes and continued to be marathon-fit at all times. It was often hard to get started, but once I was out the door I was always glad. Snowy running was magnificent. So quiet. So still. I ran for the two winters I lived in Missoula and loved it. My friends talked about their telly races, about weekends at the ski hill, about backcountry adventures and, smug in my one-sport stance, I listened and nodded and thought, “Silly creatures!”

When I first moved to north Carolina, I could not believe how much everyone seemed to care about college basketball. I’d be offered tickets to Duke basketball games and would go, but would bring a book and ear plugs. When I walked into water cooler conversations about games, I would ask in the tone of a statement, “Don’t you have anything interesting to talk about?”

But then, I fell. In that part of the world, college basketball fandom is like a virus. I thought I was immune. I wasn’t. when I caught it, the fever heated me up and I would beg for the tickets I once waved away. And I learned an important lesson: often I resist things I end up loving.

And so, reluctantly, I have learned to embrace other outdoor activities, even in winter. After two years in Montana I moved farther west, to Spokane, Washington, and now have two pairs of skis. I’ve skied at resorts, and on ridges off exits on the highway. I’ve traveled on a snowmobile to ski on a frozen lake. I’ve tried ski-joring with my dog, Helen. I hitch a rope to her and ask that she tow me. She’ll do it for a while, but prefers to run alongside me as I ski.

Though I still run throughout the winter, still love that I don’t need much more than warm clothes and the right shoes, I’ve come to see the change of seasons—and the cold and snow that comes with it—as an opportunity for challenging myself. If skiing is a virus, I’ve been infected.