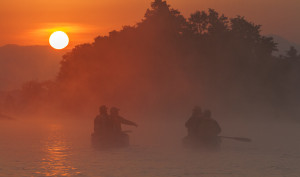 Exploring the Highlands of Central India

The highlands of Central India were once wild and unexplored places, forested hills and gorges populated by unknown beasts and ruled by the Gond tribes.

Today, one of India’s best national parks conserves the remainder of this once-pristine wilderness.

The sun hadn’t risen yet, and it was cold. A mist rose up from the water of the Denwa and Tawa rivers, meeting together in this reservoir, and on the other side of the river was the Park. The ambience was Jurassic. The thick teak forest rose up low hills, increasingly rugged deeper into the Satpura hills of Gondwanaland, Central India.

In 1871, shortly after his death, Captain James Forsyth’s book appeared in the market. “Highlands of Central India” was an account of his explorations of India’s vast, rugged, heavily forested heartland. It is an epic account of shikar and hiking, of exploration and of the tribal Gonds. Today these highlands have been tamed, but an important part of it remains preserved in the 524 sq. km Satpura National Park. Along with the Pachmarhi and Bori sanctuaries which it borders, the area’s nearly 1500 sq. km leaves enough space for the jungle’s sloth bears, wild dogs, leopards, tigers, crocodiles, black bucks and bison to roam.

Driving down from Delhi in an Audi Q3 to smooth over the bumps over the long road, we sped through Agra (via the incredible expressway), a stopover in the Neemrana resort in Gwalior, past the mess of Jhansi, on to Sagar, and then muddling our way down to a remote train junction where the jungle began. An epic road trip, just the way we like it, all for a few days of forest silence. For many, Indian wildlife safaris are synonymous with endless bumpy, noisy jeep rides in the hope of spotting a tiger. We wanted a different experience. The Satpura National Park is one of the very few such protected wilderness areas in India where visitors are allowed to experience nature as one truly should, on foot or by canoe, instead of those stupid green jeeps.

Our naturalist was David Raju, trained initially at Taj Safaris before he moved to the Forsyth Lodge. David clearly knew every tree, animal or insect in these parts. Canoeing with the naturalist and a forest guide is possibly one of the best experiences in Indian National Parks. This is the way wildlife should be observed – at one with nature, silently paddling along on the reservoir, watching the wetland for marsh crocodiles, eagles, herons, hornbills, kingfishers and more. It was one of the most peaceful national parks I’d been to, with minimal vehicular noise. A ghost tree rose eerily between the thick teak and sal forest. After canoeing across the river and exploring its wetland areas, we pulled up on the other side, in the park. After a picnic breakfast, we walked deep inside the core zone, the only national park where you can. Forsyth’s naturalists accompany you on this experience, pointing out plants, insects, birds and if you’re lucky, its mega fauna. The local forest guide carried an air horn to ward off bears, a can of compressed air with horn on top. We later saw a sloth bear, while another group spotted a pair of leopards.

The Forsyth Lodge is built in traditional style with natural materials—Laurie Baker-style packed mud walls, an architectural and construction style that remains as ecologically sustainable as possible; and an ambience that retains the closeness of the jungle. This was a perfect blend of indoors and outdoors. After the morning heat, we swam in the Lodge’s cold pool before a nap in a net-covered bed on the room’s open roof. To sleep in the open is the greatest luxury, one we plan to return to.