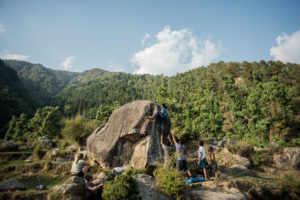 Ladakhi climber Jamyang Tenzing has been exploring and opening new climbing destinations in North India – and he’s only just begun.

For years, rock climbing in India was an out-of-the-way sport, with little interest from the general public. Local climbers opened, even bolted, routes in their areas, but it was still a sport populated with social misfits. Even the now-popular climbing spots of Hampi and Chatru were opened by a hermitic – and mythical – climber called ‘Pil’. He spent much of his time alone, living out of ‘goofas’ (caves). In Chatru, he created a small topo map of his climbs. Only one copy of it exists, and he was renowned for not wanting to share ‘his’ climbing spots.

Over the last few years, though, climbing in India has begun to enter the mainstream. A new breed of climbers has emerged – young, strong and ambitious. New Delhi is home to one such community, and at the center of this community is Ladakhi climber, Jamyang Tenzing – known affectionately as Jammy.

Over the last few years, Jammy has committed himself to discovering and opening new bouldering spots in North India, all the while making it open and inclusive by bringing as many climbers as possible. After getting his start with Trad Routes in Ladakh, J&K, he organized the first Suru Bouldering Festival near Kargil. Looking for boulders in Delhi, where he spends his winters, he found and popularized a spot in South Delhi he calls Zion. Soon after, he organized the first Kareri Rock Trip, hidden away under the Minkiani Pass in the Dhauladhar Himalaya. Right now, the second edition of the Kareri Rock trip is underway. It hasn’t been an easy journey for Jamyang.

He started on his climbing career relatively late in life. At 27, he completed his Basic Mountaineering Course, where he discovered rock climbing. “I recall my first attempt on the climbing wall at the institute and it was love at first sight and it felt like the most natural thing for me to do. After that I went climbing at I.M.F. (Indian Mountaineering Foundation) a couple of times but I still wasn’t really climbing.” It was during the Leh floods of 2010 that he became a regular at GraviT, a small bouldering gym in Leh owned and operated by Mumbai legend Vaibhav Mehta. “There was chaos everywhere,” he tells me, “and amidst this chaos I discovered GraviT through some friends. “It was such a good vibe around the gym and everyone was very supportive and shared whatever knowledge they had. It was around this time I met Kunal, Shyam, Suhail, Nishit and you who made me realize the depth of the sport and the community.

Over the next couple of years, he almost climbed exclusively indoors, with some outings to Shey and Gompa rocks (which any climber visiting Leh now knows well). One summer day in 2012, local climber Suhail Kakpori visited his house and announced he had bought GraviT, asking if Jammy wanted to partner up to run it. He jumped at the opportunity. “There was no stopping from there!” Jammy says. In the years that followed, GraviT would become the center of the rock climbing community in Leh. But before they could do that, they needed to make money. At Rs. 100 per day, with free shoe rentals and only a small bunch of full-time climbers, most of whom often had some excuse to not pay, GraviT found it hard to break even. “We tried to set up a proper café at the gym,” he says, “but it didn’t work out. “Food frying and the stench of climbing shoes don’t go too well together.”

As he focused more on GraviT, he had less time to devote to his regular business of organizing treks and expeditions in Ladakh. “We then focused on climbing outdoors in Shey and Gompa on some top rope routes bolted by Vaibhav and soon we were taking tourists on day trips while getting better at our own climbing as well.” This allowed GraviT to make enough money to pay the rent. But the daily climbing sessions meant Jammy had fallen even deeper in love. Jammy says, “I had caught the bug big time and couldn’t think of anything apart from climbing and started dreaming about getting stronger and starting a climbing revolution in Ladakh. Suhail and I started looking for rock faces around Leh and that’s when we found ‘Flash pump’ a 30m face on the way to Khardungla, we set up an anchor with all the knowledge that we had had we finally started climbing there. It was just awesome, this feeling of discovering and actually climbing it. We started taking people out climbing there, mostly friends and since the face was mostly shaded it was just fabulous.”

Around that time, Jammy and Suhail began climbing with Jeremy Higle, an American climber and instructor who ran the International Mountain Leadership Institute, a non-profit working with local guides in Pakistan, Thailand, and Ladakh. Along with Jeremy, the duo managed to turn Shey into an international crag. “We managed to be a part of the process of developing Shey into a proper crag with over 20 documented sport routes and a couple multi pitches and several identified trad lines.”

They also made their first foray to Suru, which Jammy calls “A wonderland of climbing”. “We spent a week there and were completely in love with the feeling of exploration and it kindled my curious nature and rise above the mayhem of the universe, I felt like I had found a purpose finally and it was to look for these boulders and climb them. I know it sounds silly to a non-climber, but that’s how I felt. Suhail and I started making plans of getting our friends and other climbers to suru valley but we couldn’t come back for the next 4 years due to personal obligations.”

‘Personal Obligations’ have forced many Indian climbers to quit the sport. In 2012, the Ladakh climbing crew was still struggling for gear, depending mostly on used gear and shoes left behind by visitors. Money was hard to come by, and Jammy’s family was growing. But that winter, Jammy took his wife – then 6 months pregnant with their first child – on a climbing trip to Hampi. “We had a blast there, for the first time I got to climb graded boulders and I realized that I had to work very hard in order to climb as much as I wanted.” Over the next few years, he would constantly mull over the idea of having a climbing festival in Suru. With a new baby and bills piling up, Jammy was forced to focus on ‘work.’ “But I kept talking about Suru with friends,” Jammy says. “Suhail and I realized that we had to get many people to come climb in Suru to develop it as a climbing destination and once that was established we could also support the community that we were trying to build.” The moment of change came in 2016, four years after the first Suru Exploration, when Sandeep Kumar Maity, one of India’s strongest climbers said to Jammy, “Just follow your instinct.”

“That night as I kept rolling in my bed pondering over the idea, spontaneously I got up and created a facebook event called Suru Boulder Fest and marked the dates towards the end of tourist season, from the 25th of August to the 5th of September.”

The next day, some climbers had responded. Not too many, but enough for a rock climber to consider it ‘solid’. The festival started slow, but by the end of the week, over 70 climbers from 20 countries had turned up, turning it into an international climbing party.

In the winter of 2016, while Jammy was ‘babysitting’ Dahzum, his daughter, Sandeep and he stumbled upon a forest full of boulders and climbable sandstone faces. “That helped get the Delhi community out on the rocks again as everyone was bored of climbing the same boulders. Large enough numbers of people were showing up on weekends and we managed to open around 15 new problems. I decided to call it Zion.”

I chatted with Jammy often during the organizing of the Suru Boulder Fest, and his commitment to the community was clearly visible even then. As many climbers called and said that they couldn’t afford the nominal entry fee – to be used for providing food and tents to climbers – he always responded with “just come and climb, pay what you can, we’ll figure it out.”

In 2017, with the momentum of Suru and Zion behind him, Jammy organized the first Kareri Rock Trip. It wasn’t an easy trip to organize, as staying in the Kareri valley needed logistics like tents, porterage and a kitchen to cook for the hungry climbers. Delhi-based Project Rockface helped out with crash pads. After a day’s hike in, they made camp in a boulder field under the Kareri Lake. “We were 15 people who finally made it to Kareri and over 4 days managed to open around 30 problems of which the hardest was ‘Ninja Chacha – 7A’ opened by Ashish Khanijao at 4am. It was also very inspiring to watch Prerna Dangi send the tricky ‘Kareri Double Arete’ 6B .”

Jammy and the Delhi crew have just departed on the second Kareri Rock Trip. This time, Jammy says that GraviT’s Weapon of Mass Destruction, Sandeep is on the trip as well. “We hope to be able to establish many new lines with Sandeep,” Jammy says.

As climbing becomes more popular in India, Jammy has his work cut out for him. He has his sights on many different areas where he sees potential for all kinds of climbing. The devoted father, who often brings his daughter out climbing, has finally begun to break through the financial difficulties he faced in the beginning and has his sights set on other undiscovered climbing locations.

He says, “we also found a village near Leh called Nye and realized the immense potential there. We opened several boulder problems and 4 trad lines there. So after stumbling across all these new climbing areas, it has become my responsibility to take people there. A lot of climbers like to be secretive about their projects and areas but for me, I like to climb when the environment feels like a celebration and that’s what motivates me the most towards putting these events together.”

All photos from Jamyang Tenzing collection. Jamyang can be found on Instagram as @jammy_gravit.