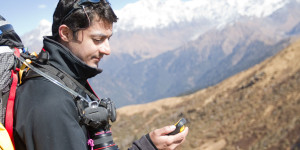 The Garmin eTrex 10 is a rugged, waterproof, dustproof GPS / GLONASS receiver that is a device of choice for mapping Himalayan trails

Several months ago, Indian climbing veteran and The Outdoor Journal Advisor Mohit Oberoi told me about a trekking guidebook project he and Punit Mehta, National Outdoor Leadership School instructor, wanted to work on (A Traverse Across The Western Himalayas – coming soon). He asked me to choose a GPS device that would be perfect for mapping trails in the remote Himalayan wilderness. After some research and debate, we chose to do a Garmin eTrex 10 review.

This small yet hefty yellow-and-black rubber-encased device sits in your palm. It’s one of those dump-it-in-your-pack kind of devices that should last forever. We chose it for the following reasons.

Compare the above specs to your average smartphone. Twenty five hours (always on) is a long time. In the mountains, I switched it on periodically to mark way-points on the trail, camp-sites and other locations. Switching it on each time took about 3 to 5 seconds, and it retained in memory the previous satellites used – which meant that we acquired our location very quickly each time.

“A single set of batteries could (and did) last an entire 10 day trip in the wilderness.”

Punit, the main author and one of our contributors, had been using the device for a few months. He showed me how to use it first. He switched it on on the roof of the building housing the Adventure18 shop in the Satya Niketan Market, New Delhi, and we waited patiently for the gizmo to acquire satellites. It didn’t take long. Within seconds it had four, then five, and kept going. We had our GPS latitude, longitude and altitude right down to a 5m precision.

But the Garmin eTrex 10 is a very basic device. It’s got a small, low-resolution monochrome screen (that’s also very legible, and saves battery life, not being color). It doesn’t accept SD or any other data cards, you can’t add maps on to it, it doesn’t have a touchscreen, camera or any other funky add-ons. If you’re looking for a color and/or touchscreen, camera, data cards and other extras, Garmin has other models in the Dakota and Montana ranges. The Garmin eTrex range is the most basic range, the 10 being the lowest-end model.

It can tell you the sunrise / sunset times, has a calendar, storage for 50 routes and 1000 way-points (once back home you can back up your data with a USB connection).

“It has a responsive, fast receiver and gets the job done”

All said and done, it does have a few cons. Apart from the no-frills, my one main worry was the tiny controller joystick button that sits on top, which obviously gets jostled around a bit in your pocket. After a few months of use, it was no longer super-responsive, sometimes requiring a slightly harder press or different angle to respond. Perhaps it should be replaced by a four-way button controller, or have a protective plastic cover or something.

Secondly, it’s obviously useful to have a way to clip the damn thing onto a pack shoulder or chest strap, so it’s right there when you need it, instead of having to dig through your pocket for it. The model itself comes with little spine with a D-ring at the back that unlocks the battery compartment. You can buy various accessory mounts including belt clips, lanyards and bike mounts – but we feel that some mounting system should come standard – especially for trekkers, who would make up a core market.

All said, these two points can’t take away the fact that this is one of the most useful GPS devices on the market, if you’re a serious trekker or wilderness traveller who needs to know where they are and where they’re going. If you’re mapping an area, it’s a no-brainer. If you’re following an existing, mapped trail – make sure you’ve programmed your way-points in in advance, and you’re good to go.

One last point. During a dinner-party conversation with other trekkers, we heard about a recent Himalayan trek with one member carrying an iPad pre-loaded with maps. This well-armed techno-trekker then was able to lead the entire party, local guide and all, point-marching each day (“there’s a small lake right up ahead, behind that ridge”). Sounds useful, but would you really want to carry your iPad into the Himalayas? How are you going to charge it, and how many porters are you hiring to carry the rest of your gear? We don’t know. For serious walkers, fancy devices should perhaps be left at home, unless the trip is very short, or there’s a veritable army of porters carrying your tent, solar charger, stove, gas and rations.

That said, perhaps more accurate, rugged-cased smartphones and mobile devices may indeed be the GPS wave of the future, at least for those following trails.