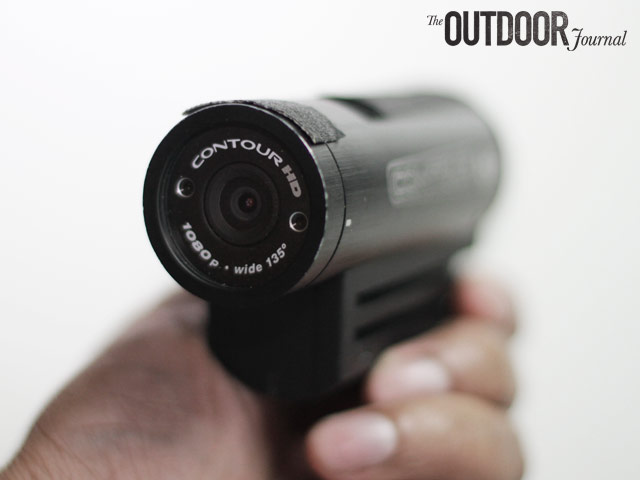 Contour's offering is a weatherproof POV cam that can take a beating.

The ContourHD is a tiny, full-HD video camera for shooting action/adventure videos during rafting, climbing or paragliding. As technology gets increasingly better, in some ways, it’s never been easier to create broadcast-quality HD video. One of the most amazing developments in video cameras in recent years has been the so-called “helmet cam” – small, full HD cameras which capture incredibly footage.

While mainstream companies including Sony, Victor Company of Japan (JVC) and others are looking to enter this segment, the current marketleaders are GoPro and Contour.

I actually contacted both companies sometime ago to do a comprehensive review of both cameras. GoPro did not bother with a response, while on the other hand Contour immediately shipped me a box with their latest (at the time) ContourHD camera, and a selection of accessories.

I spent the next year using the Contour on various adventures around the world – from riding horses into haunted canyons in Arizona, to ice and mixed climbing in the Alps, to rock climbing in Armenia, road tripping in India, and snorkelling with whale sharks in the Philippines.

The little camera, while full of various quirks and frustrations, came sailing through – despite being banged repeatedly on rocks, dropped in snow, ice and seawater, and otherwise stored in a pack loaded with pointy-sharp climbing gear.

“Contour appears to focus more on the ‘action sports’ market”

They host their own videos, which are typical of outdoor enthusiasts and athletes catching huge air, off skis, BMXs, bikes, and whatever else. This makes sense – it’s a sturdy little beast, the actual camera encased inside a small metal weatherproof tube; and the whole thing fixes to the side of your helmet, the bars of your bike or cycle, or any other surface you can get the mount on.

GoPro on the other hand appears to have the best overall video quality, even though we’ve not played enough with it (Himraj, The Outdoor Journal Editorial Intern, has shot with it on a trip to Peru). PBS shot parts of a short documentary on the famous solo climber Alex Honnold in Yosemite using GoPros anchored on tiny ledges that Alex crimped past.

I had a few quibbles with the Contour. Sometimes, sliding the record switch would accidentally open the back cover, totally killing all the video I might have shot till then. The camera maker has since then assured me that this problem has been fixed in newer models.

More frustratingly, the mounts have issues. I’ve done everything, from gaffer taping it on battle helmets while training with the French Army, to mounting it on climbing helmets, the sides of cars, a horse, my cat, and sticking it on a bodyboard, and it’s always worked…almost!

Because of the weight of the camera, my climbing helmet begins to tilt to one side, making the video all tilty. Maybe that’s a problem with the way my helmet fits, or maybe it’s the mount, which is made more for a flat surface than the curved surface of a helmet. (I didn’t have this problem as much with an Army kevlar helmet, which is so ridiculously heavy anyways). Mounts, or chest or head harnesses are something they have also been working on.

Lastly, you’re forced to make all settings – brightness, audio, video quality etc. – via a computer program before setting out. Contour’s newest models now have a bluetooth-enabled fix and an iPhone app to let you use mobile device to make this settings. I haven’t used this one yet.

So the final question – what should you buy? I can’t tell you because I haven’t used the GoPro as much. What I can say is – I’ve given this camera a real beating, and it’s worked beautifully. I have an amazing video from all over the world, video that I couldn’t have gotten even a few years ago. Having one in your travel kit – of either brand – is a no-brainer.