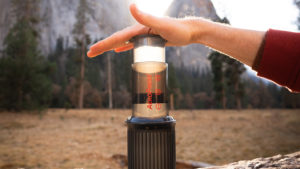 AeroPress Go Review: A Winner in the Pursuit of Great Coffee, Outdoors or Anywhere

I have committed many misdeeds in the pursuit of a decent espresso. With the AeroPress Go, I may no longer have to.

A life in the pursuit of coffee. My morning noisette in Paris, on the way to work: an espresso with a drop of milk, so that the café turns the color of a hazelnut. Taken quickly, and then repeated at least once before the rush began in our newsroom.

One time in Arizona, waking up to a chilly morning in Canyon de Chelly. Our horses snorting steamily, framed by red sandstone walls, while a Navajo guide starts a fire, to boil ground coffee directly mixed with the water in a small pot. “Cowboy coffee”, he grins.

On snowboarding trips in Kashmir, desperate for good coffee, I tried everything, including that stain on the conscience of humankind, that sacrilege, Nescafe. I tried other “instant coffees” when nothing else was to be had; before finally accepting that I would survive just on kahwa, which despite its identical loanword origin as coffee, is actually a kind of green tea flavored with spices, dried fruits, nuts, and honey. Actually, it’s really darn good. It’s just not espresso.

Once, we spent the night in a refuge while climbing in the Mont Blanc Massif. The warden asked us what we wanted for breakfast. I chose coffee, while my two companions picked hot chocolate. In the morning, all three arrived the same way. In a large bowl, mine filled with steaming coffee, accompanied by a slab of bread and butter. It was exactly the right quantity for my bodily constitution and the next 18 hours of mountain climbing.

In Tuscany a few years ago, on a hike with other adventure travel professionals, we walked through a sea pine forest before arriving at a beautiful, deserted shore. The local guide pulled out a tiny, ancient Moka pot, a camp stove, and made rounds of espressos for us all.

A short story: In India, for some strange reason, espresso and cappuccino have gotten their meanings exchanged in local culture. Therefore, when you want an espresso, you ask for a cappuccino, and vice versa. The reason, according to my family (they might be joking), is because about fifty years ago, the first espresso machines came to India from Italy. They had two buttons, espresso, and cappuccino. Someone mixed up the stickers. So when you hit one, you got the other. Since all the people manning the coffee stations at weddings or other public events weren’t exactly coffee drinkers, an entirely incorrect loanword lexicon emerged around this simple little mistake.

Except, of course, this is India, which means that there is an exception to every rule.  I myself grew up as a kid in India in the ‘80s, and until my mid-20s, assumed that Italian Mokas were Indian, because that’s what we had at home. To many others, especially in the north, coffee can mean that “instant” aberration; or you may get a cup of watery black, well, coffee-flavored water. And there are people, many people, who do know what coffee is. If you’re in South India – a genuine coffee-growing region – your “filter coffee” is a real, local thing. But don’t be shocked if it comes boiled with milk and sugar and possibly mixed with spices, because, that’s what the local thing is. It’s alright, but it’s not espresso.

Let’s go back to that Tuscan Moka pot. It struck me then. Why wasn’t I traveling with one all the time? Well, because traveling with a stove can be problematic, especially if you are catching any flights (I’m talking pre-COVID here). So when I read about the Aeropress GO travel espresso-maker, I was intrigued. A practical way to ensure good coffee on the go?

Let’s stop for a second. Apparently, most people have known about the Aeropress for a while. But I mostly live in Europe now, and we get good coffee usually even on top of a mountain. At home, we have both an original Bialetti Moka and a DeLonghi machine. I have never paid any heed to all this talk of pour-overs and French-presses and what-size-grinder-do-YOU-have?

But after a particularly bad coffee experience – believe it or not, at a hotel during a conference in Italy – I figured I had to have something on me to rely on. So I finally took a look at this Aeropress craze.

First, a little history. The guy behind Aeropress is a former Stanford professor and inventor, Alan Adler. He also invented the Aerobie – remember it? I do, because as a kid I threw mine a heck of a lot and damn, it flew far. In the early 2000s, he turned his mind to coffee. By 2005 he had invented the first Aeropress; by the early 2010s, the Aeropress had sold over a million units in 60 countries.

Wildly good press reviews and rave mentions everywhere. Apparently, there are even cafes dedicated to making Aeropress coffee and an Aeropress coffee championship. Clearly, I’m way behind the times.

Now the original Aeropress is also a travel-friendly gadget; weighing about 226 gm, and informed by exactly the same rubber and plastic design aesthetic as the Aerobie. Both the original and the Go can give you from 1 to 3 shots of espresso, though the original’s overall capacity is a little larger (296 ml vs. the Go’s 237 ml). But the Go is clearly oriented at, well, going somewhere. The whole thing is one gadget, essentially one 14cm (5.3”) mug covered by a red silicone lid on top – and the press itself packed inside it.

I got mine by DHL. The founder touts their customer service on their website. I can tell you it’s real. I emailed them about a review unit and received a near-immediate confirmation from a real live professional, with no handover to a PR agency. Aeropress followed up with me all the way to ensure until it reached my hands.

Despite my background in taking things apart and putting them back together again (a skill that my father thought made me apt for engineering school; it did not); I am usually somewhat disinclined to open new gadgets and figure out how exactly one uses them correctly. It might be an age thing; but I remember well how long it took us to put up that cool-looking Heimplanet tent once, Zo. Just because we didn’t read the instructions.The “manual, what manual?!” attitude served us 30-to-40-year-old somethings well as tech-forward kids in the 1980s; unfortunately stuff is so much more complex today.

Fortunately for us, the Aeropress travel espresso thingummybob is not at all complex. It’s basically a plumbing tool that makes coffee. There’s a plunger and a small coffee filter you insert on one end, that’s kind of it. If you want warm espresso, boil up some water on a stove or wherever; you want a cold brew, just go ahead with cold water.

You take off the red lid. Five things slide out neatly. Something that resembles a pump. A screw-on filter. A filter holder. A plastic scoop and a plastic folding stirrer. I stared at it for a bit and then put on the water. It’s actually very simple. Place a paper filter from the holder into that filter cap. Screw it onto the pump (technically, the chamber. Pull off the plunger first, a sixth thing, from that pump-looking thing). Pour a scoop of fine-ground coffee into the chamber and shake to level it. And, as per the instructions, pour in 80℃ (175℉) water into the chamber. That’s not boiling water, that’s quite a bit cooler. Stir it for 10 seconds, and then put in the plunger (yes, I told you it’s a plumbing device) and gently push down… using air pressure, actual drinkable espresso (or similar) emerges from the other end! What a miracle!

It is indeed an espresso, almost exactly like a Bialetti’s, and even has a bit of crema. Surprisingly though, the taste is softer, without any background of bitterness or slight harshness that sometimes comes from a Moka pot or espresso machines. I assume that’s partly because there’s no 100℃ boiling water involved; and partly because no heat is applied to the grinds either. At about $30, I’m sold. The coffee tasted, dare I say it, better than my Moka express? Is it safe to say that?

Now a second of honesty. This isn’t the first time we’ve tried (or even seen) a plunger-type portable espresso machine. My colleague Lorenzo got a review unit that we tried out, called the Minipresso GR by Wacaco. At 362 gm, the Minipresso is heavier than the AeroPress or AeroPress Go, and comes with a very different design aesthetic. It also makes more of a real espresso, crema and all. But I never found it very appealing as a travel journalist. It just seemed too chunky to lug around – I’d be afraid airport security might mistake it for a truncheon. It also seems more fiddly and difficult to use.

The AeroPress, on the other hand, self-cleans. The very process of making your coffee wipes the plunger down. You unscrew the filter cap and pop out the paper filter with the grounds. If you like, wipe or rinse it once (but you don’t really have to) before reassembling back into the mug. And pop it back into your backpack or carry-on. Good coffee, anywhere.