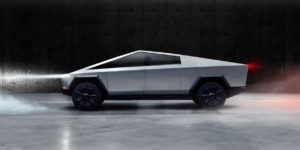 Tesla has entered the hugely lucrative electric truck market. How does the Cybertruck's "Giant Leap" strategy compare to Rivian and its billion dollar investment from Ford and Amazon?

On the 22nd of November, Tesla unveiled its latest vehicle – The Cybertruck – in an attempt to break into the American pickup truck market which has been dominated by the Ford F-150 for decades. To onlookers of the Cybertruck’s unveiling event, in which Elon Musk shared the stage with a group of anonymous techno-punks demonstrating its features, it was unclear whether the entire show was one great big practical joke. For starters, the curve-less, fractal design looks like it was rendered on a 1982 Mac. And the “shatterproof” window test failed not once, but twice, leaving no doubt that Musk created a new shortlist of employees he would like to send on a one-way trip to Mars.

The boldly designed exterior of the Cybyertruck is made from a newly developed stainless steel alloy, the same metal that’s used for SpaceX rockets. Despite the embarrassing presentation hiccups and a futuristic silhouette that has clearly come too soon for many potential buyers, the space-age design has already attracted demand overkill.  According to a tweet by Elon Musk on Sunday, Tesla has received over 200,000 preorder deposits since the unveiling. Priced at $100 a pop, that adds up to $20 million dollars for Tesla to work with in just 48 hours, although production won’t being until late 2022.

The Cybertruck is pitted against Rivian, which was recently backed by a $500 million investment by Ford in April and a $700 million round by Amazon in February, to determine who will lead the new breed of electric pickup truck through the 2020’s and beyond. The stats, at least at first glance (if you ignore the fact that it doesn’t exactly look street legal) are undeniably impressive compared to the more established Rivian in almost every category. However, can Elon Musk truly manifest his concept vehicle into reality? 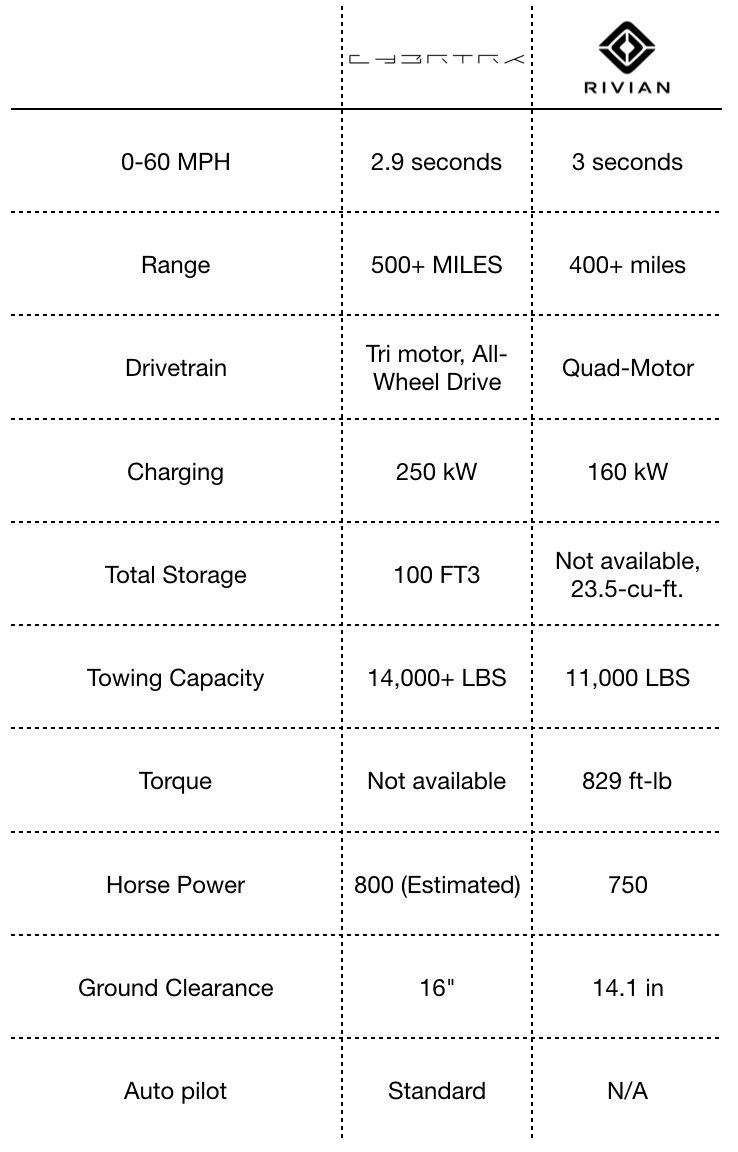 When I was visiting the Rivian factory in Plymouth, Michigan last November, I was struck by one word; invitational. (This author was invited to the first-ever unveiling of the Rivian R1T. I met the team and experienced the vehicle firsthand. However, The Outdoor Journal has not experienced the Cybertruck first hand.)

Whilst surrounded by motoring journalists who cared more about horsepower and torque, The Outdoor Journal had another perspective. We need to know about practicalities. Not what the vehicle was, but what it meant to outdoor enthusiasts, hikers, campers and environmental conservationists. Where could it take me, what could it empower me to do more of, whilst lessening my impact on the world.

At the time, RJ Scaringe stood in front of me and presented a graph of brands that produce electric vehicles a little like the one below. It suggested that Rivian was aspirational, but more importantly, also invitational. It was, as RJ put it, built “to be used, to get dirty”. Tellingly, that graph included a Tesla logo within the bottom half. 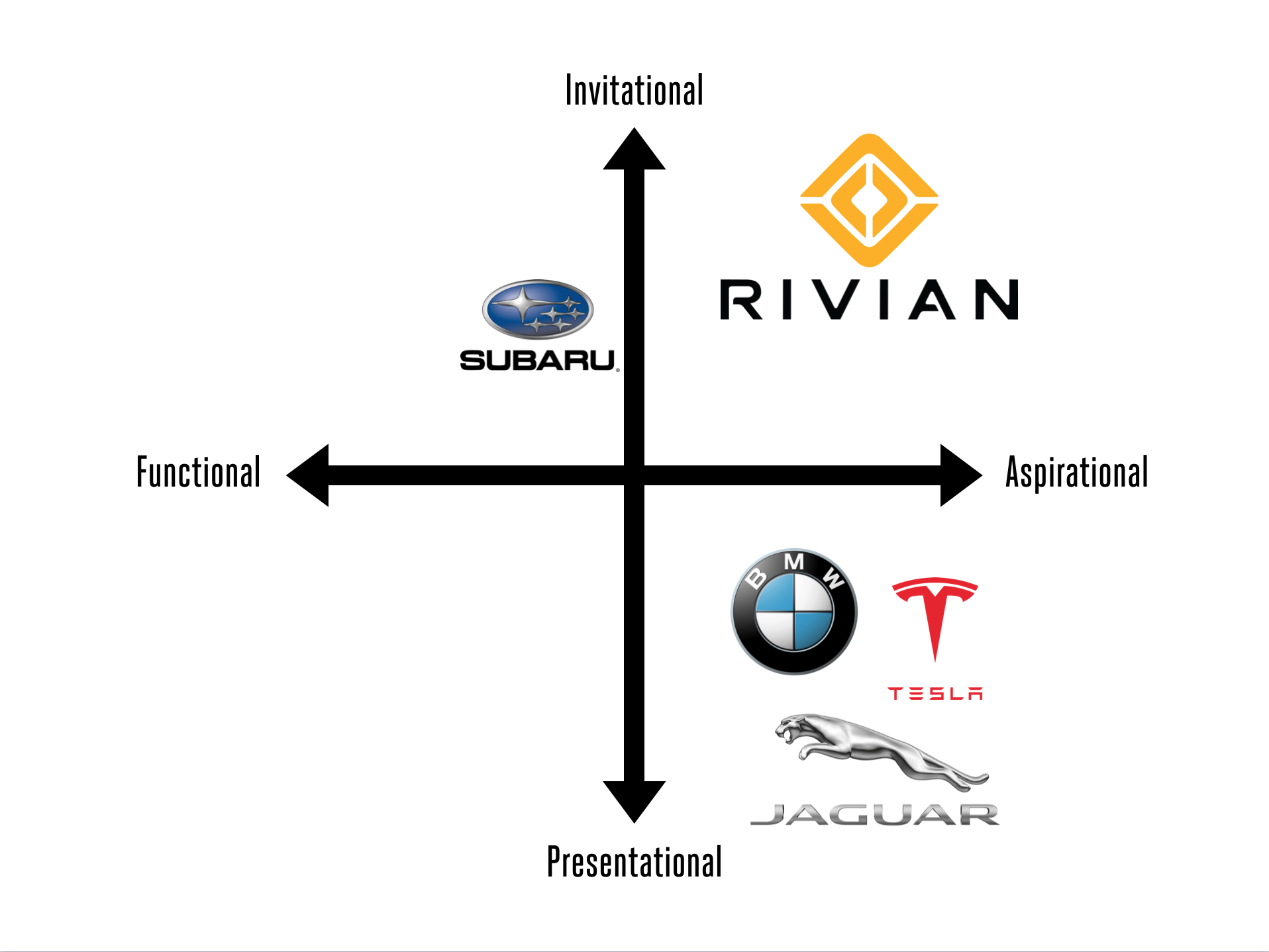 A Matter of Confidence

In our The Outdoor Journal‘s review of the Rivian’s R1T truck in November of 2018, we concluded that it was a matter of confidence in the face of battery life anxiety.

Despite impressive stats and a thorough design, a global concern abides, is the Rivian limited in the sense that it is only built for adventurers based in the United States, who might enjoy day trips or weekend getaways in close proximity to the charging points?

All climates and regions.

50% of our readers live outside of the USA, 25% live in in Asia and the remaining 25% live in Europe, whilst the vast majority of you love serious adventures. Perhaps this car has just been built for a US audience who enjoys weekend camping jaunts? Would we survive a Rivian drive off into the Himalaya? If in the Nordics, could we take an excursion up to the Arctic Circle? Would we have the confidence to drive away from major infrastructure and down through Central America?

Elon Musk’s greatest strength is his ambition and imagination. However, it is also his greatest weakness, as legendary short-sellers and amateur investors gather to trash and praise Elon Musk’s electric empire. In contrast to Musk and Tesla’s “giant leap” attitude, Scaringe and Rivian have been taking measured steps to connect us outdoor enthusiasts to the outdoors in a conscious, sustainable way. The Outdoor Journal cares more about reliability and immersion in nature, and less about whether our windows can sustain the blast from a nine-millimeter handgun. If we are going to drive north into the Arctic Circle, or down into Central America, in which brand you place greater confidence? In Plymouth, Michigan last November, I braved the scorns of the car journalists around us, stepped forward and asked RJ Scaringe about battery life anxiety. RJ told me that Rivian has consulted adventurers from every continent and can cater to all the demands that are associated with all climates and regions.

The new Tesla Cybertruck betters the Rivian in almost every category, outside of exterior design (in this author’s opinion). However, here’s the problem that Tesla faces –  This product, certainly to our audience, needs to be invitational. It needs to be trusted to get out there and get dirty. Right now, the Cybertruck is just vaporware – some far off future promise. The reality is that RJ Scaringe and Rivian could be working on the 2nd or 3rd iteration of their vehicles by the time Elon delivers the first version of the Cybertruck in 2022.

Let us know what you think at editorial@outdoorjournal.com