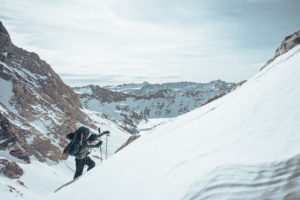 Film Review: Ode to Muir. A Snowboarding Movie, and an Important Covert Education

Lost in amazing scenery, and one of outdoor's great personalities. Prepare to learn, even if you won’t realize it’s happening.

Before we get to the movie itself, don’t be put off by the narration that you’ll hear in the trailer. It’s a tone that you might expect from the X-Factor announcer, or any movie trailer that starts off with, “In a world…” and it’s important to give you an incentive to push on, in case you might need it.

To answer the question that I suspect you have… yes, the same narration continues throughout the film. I know, it doesn’t seem like a good thing, but I have my own personal relationship to that voice. Something that develops as the film continues, and you recognize its purpose.

WHAT WERE WE EXPECTING FROM “ODE TO MUIR”?

The film is called “Ode to Muir”, so an education about John Muir and the John Muir Wilderness? Probably. Great scenery? Sure. Another awesome Jeremy Jones snowboarding video? Very likely! I was correct on 2 of 3 fronts.

“Price of admission: lots of calories”

In short, this is a nine day, 40 mile foot-powered trek through the Sierra Mountains, as two-time Olympian Elena Hight, and a guy introduced as the “Sierra Phantom” accompany Jeremy Jones deep into California’s John Muir Wilderness. The remoteness is exactly that, and it is earned. Jeremy takes joy in mentioning the “Price of admission: lots of calories”. His point is a good one, that this is something that we can all enjoy. Crest after crest, the views are stunning and beautifully shot (as you might expect from a Teton Gravity movie). Jeremy indulges himself in pointing across valleys, and announcing that they must make their way in that direction. By his own admission, he has spent a lifetime in the Sierra, and continues to see landscapes the first time. The outdoors is a big place. 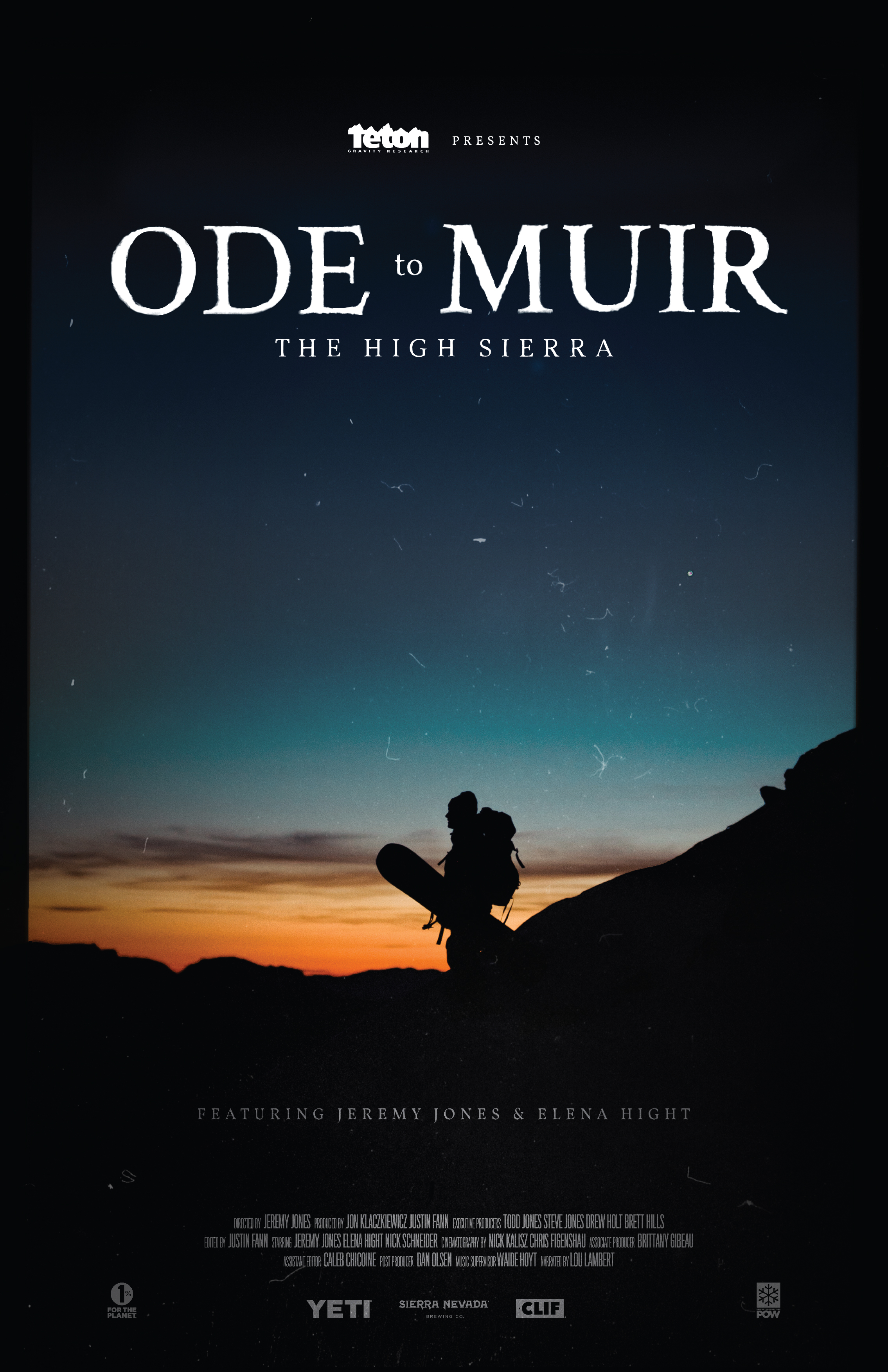 Of course, Jeremy Jones does not need any introduction. His snowboarding movies have adorned bookshelves around the world for decades now. This, however, was something different. It was something more important. There is less of an emphasis on the music, or even snowboarding (don’t expect death-defying descents here). Instead, you will find more of an emphasis on Jeremy, the landscape, and more than anything else, Jeremy’s message. This is propaganda, just the positive kind.

Ode to Muir is a little like trying to subtly slip the bad news into an everyday sentence using snowboarding to distract us. “Honey, have we got milk at home, I crashed the car, because my parents are coming around this evening”.

Note: Whilst this is not your typical snowboarding movie, I could still hear the customary Jeremy Jones’ oooohs and ahhhhs from those sat around me.

Time is spent on recalling a bygone era, when politicians spent time in the outdoors, they appreciated them and fought for them. They sat around fires, and really experienced the outdoors, they didn’t just swing clubs at The Mar-a-Lago Club. This movie is a call to action, that we must do something now, but gives us hope, that things can be done correctly, with the attitude that we have seen in presidents past. 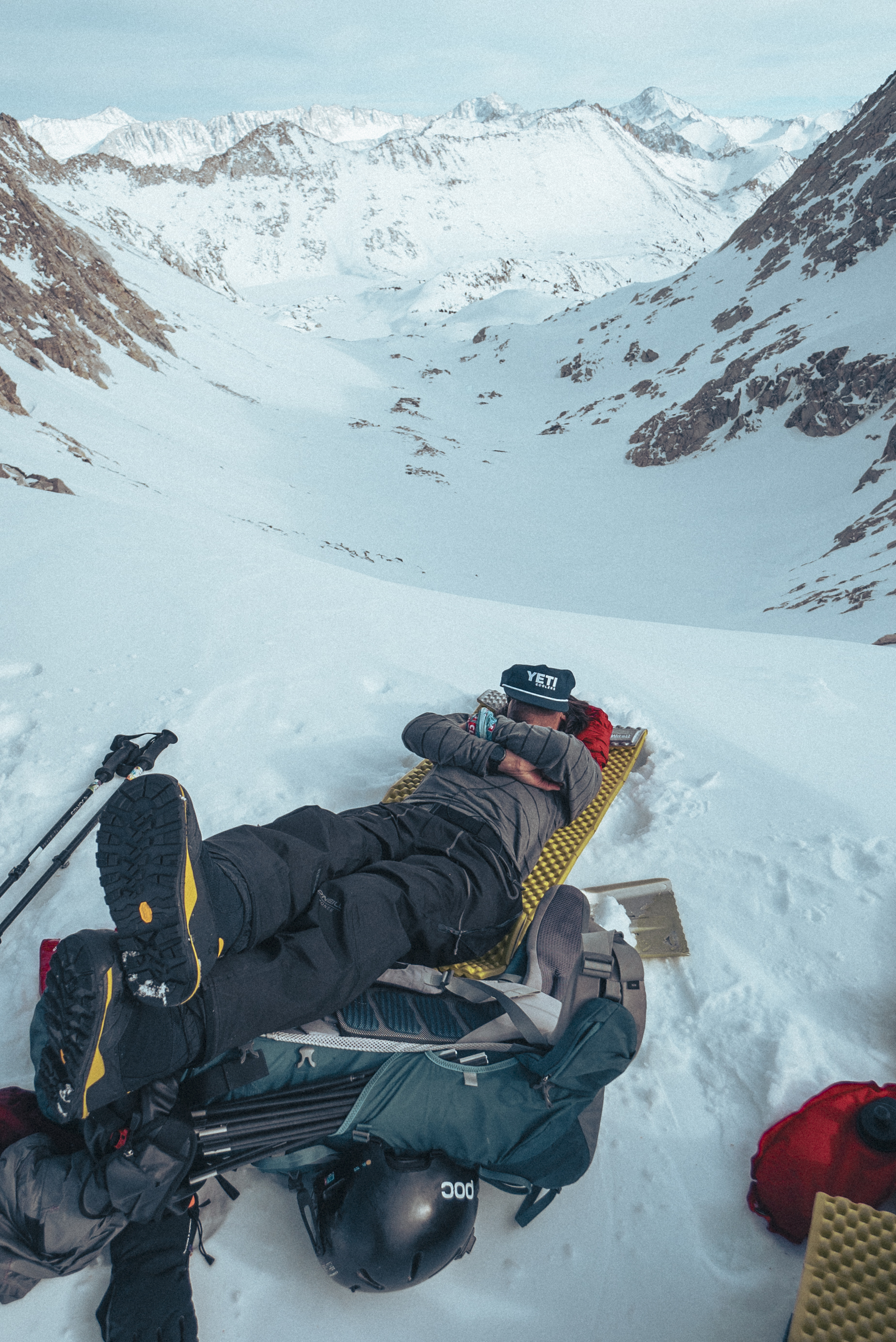 The movie is interwoven with animations that paint an important, and scary picture with regards to the future of our climate and planet. Key messaging that continually remind you that this is not just a snowboarding movie. This is an education, but not algebra, the information is presented well, it sinks in and you immediately recognize the importance. You’re going to bring this up and discuss these newfound stats when you’re next hanging out with friends.

Whilst the animations play an informative role, Jeremy contextualizes them. He refers to the terrifying term “last descents”, the chilling concept that people are now doing things that might not be possible in subsequent years due to climate change. As someone who lives in the outdoors, Jeremy can see these detrimental changes in his everyday life, and of course, it means a great deal to him. He isn’t just using what he is, but who he is to pass on this important information. Not stood behind a podium, but communicating important information to us whilst he uses his skills, and the beautiful shots to hold our attention. Jeremy obviously loves what he does, but he now chooses to do what he has done for so long, in such a way that communicates an important message. It’s commendable. What’s more, this isn’t a one-off, Jeremy is the founder of “POW”, or “Protect Our Winters”, an initiative with a mission to turn passionate outdoor people into effective climate advocates.

Find out more about POW: Protect Our Winters.

Still, an important point is made, real change can unfortunately only be sparked in the wilderness. Walking up the mountain isn’t enough, we need to walk up to the White House, and up Capitol Hill too.

“The older I get, the more I love my snow”

A great element of this movie is easy to miss, Olympian Elena Hight trying to understate her own abilities. Elena is, of course, a very accomplished snowboarder, she’s more than comfortable on the snow and her modesty with regards to split skiing wasn’t fooling anybody. It’s an attitude that is great to see, but will make your average Joe, with your average abilities (like me), smile. Her reservations regarding her own ability are not shared by anybody else. Nor were there any problems for Elena when it came to the descents. She’s awesome, and a great addition to the film. 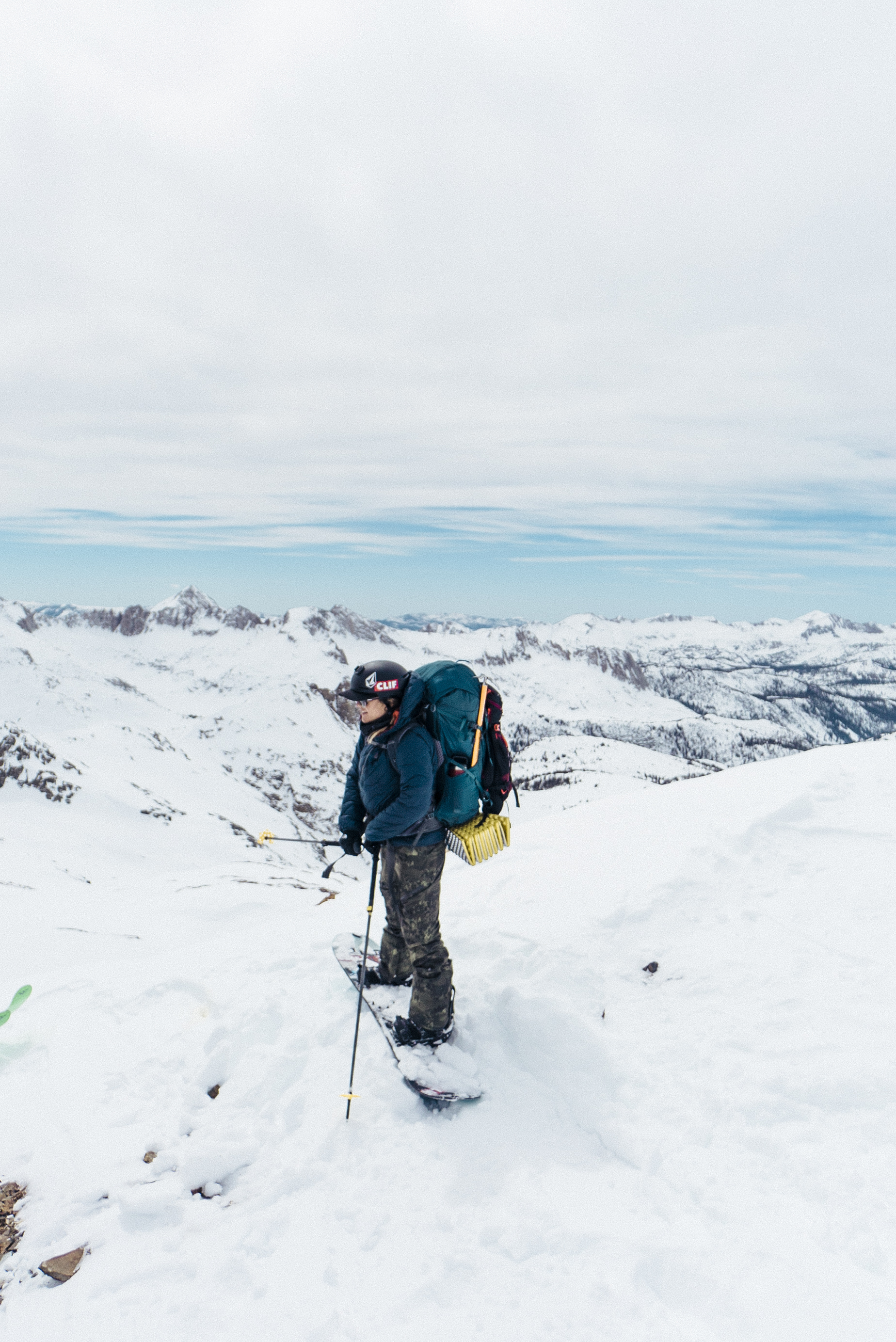 Jeremy introduces the “Sierra Phantom” pretty quickly. In effect he’s presented in a way that you would describe what Mogli is to the jungle, “ he’s out there all day and you just see his tracks”. A brief appearance, but worthwhile.

Elsewhere, there are laughs from those who are sat around me watching the movie, as Jeremy reaches the crest of ridge and summits alike. You might expect “f*ck, that was hard” or “Jesus, I need some air” but no, invariably you will only hear “Good job”, another “Good job”, or “The older I get, the more I love my snow”. As impressive as Jeremy’s attitude is, and of course, it’s due to his familiarity with something that he has done for so long, it is also the relaxed nature of those that that summit with him. You won’t hear them telling JJ to “shut up and pass me the water”, it’s all fist bumps!

The movie ends with JJ suggesting a moonlight ride, to “get the last bit out of it”; spare a thought for those that might have fancied an early night. You would really have felt for the production team, had it not been for the stunning shots caught under moonlight. As someone who can relate to these guys, they live for such shots, and wouldn’t have required much encouragement. Not that their skill shouldn’t be acknowledged, something special is happening behind the camera. Many of the shots are powerfully engaging, whilst the audio is picked up perfectly, regardless of powder being thrown around. 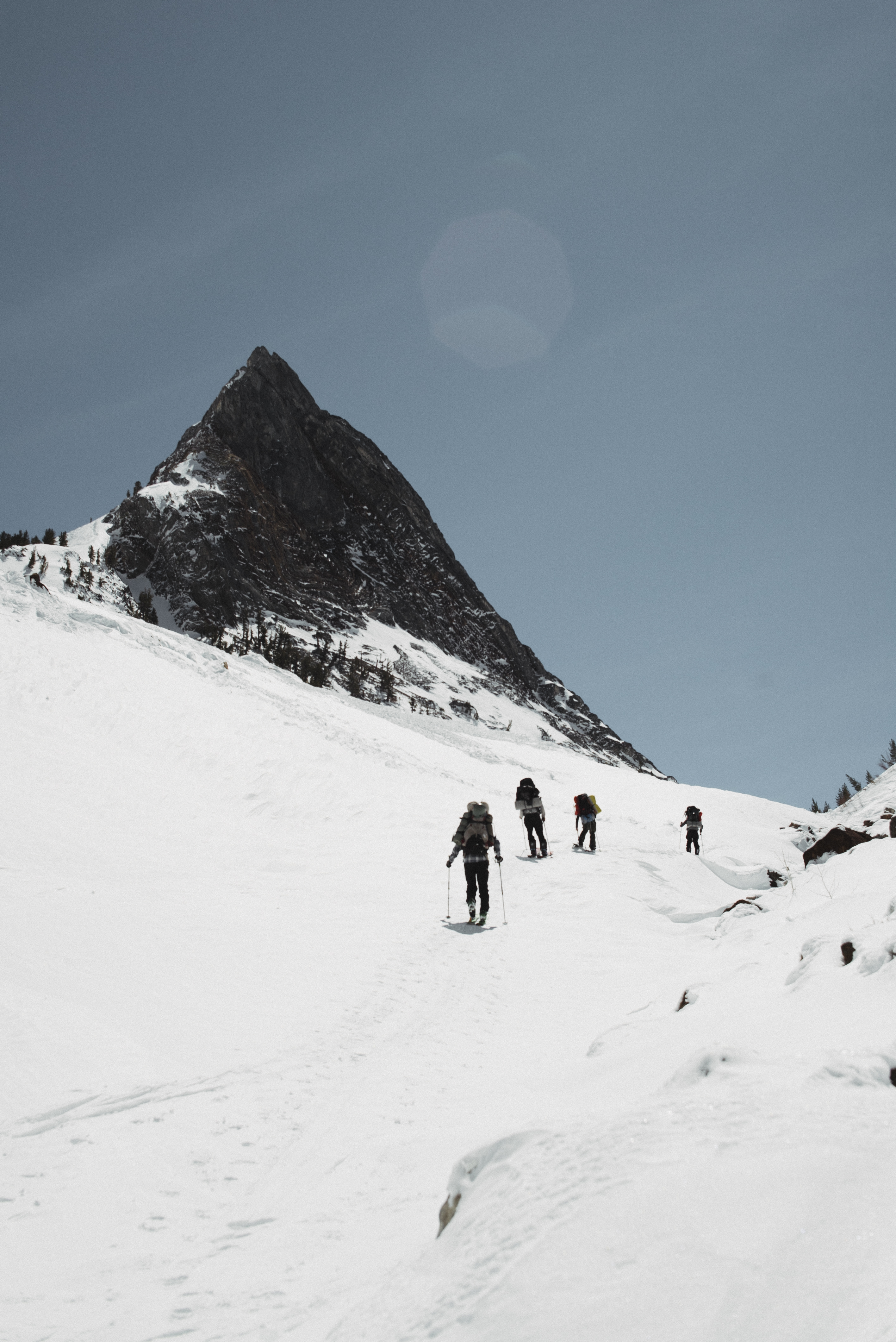 BACK TO THE NARRATION

Here’s the thing about the narration. What would the movie be without it? Whilst Jeremy brings credibility as someone who is acutely aware of “last descents”, John Muir’s words hold unparalleled sincerity that can only belong to a different time – a time when people were less cynical, and in this context, given that this is propaganda, a perspective from that time counts for something.

I had a relationship with that voice. So much so, that I almost felt apologetic by the end. In a way, the voice is synonymous with the film, you need to absorb the delivery in order to absorb the information. It was just harder to do so in comparison to appreciating fresh pow.

Who would I recommend the film to? People who like ski docs? People who care about the environment? Just general outdoorsy people? It’s of interest to each, they all cross-pollinate in a way that was definitely intended.

This is an important film to watch, it’s incredibly digestible, and it will raise awareness of important issues. It’s the kind of content that we need more of.

You can find more information, and a calendar of tour dates should you like to go and watch the movie for yourself here. We encourage you to do so.