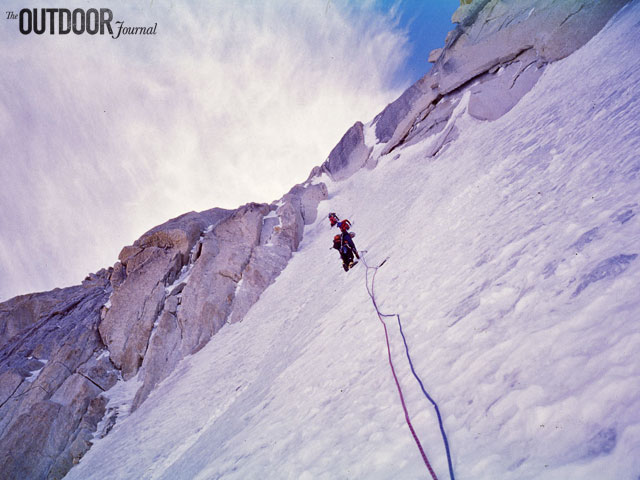 Ice-Climbing – how to make a Russian screwlette

Advanced alpine climbing tech tip – how to remove an ice screw after rappelling off it.

Advanced alpine climbing tech tip – how to remove an ice screw after rappelling off it.

The wind was blowing at sixty kliks or maybe more. The sun wasn’t up yet and I was getting the screaming barfies from all the ice my hands were banging each time I swung. We were up on the third or fifth pitch of Contamine Mazeaud, a Grade II AD+ 350m alpine climb on the Triangle of the Mont Blanc du Tacul, up in the French Alps.

With alpine climbs, it’s always hard to figure out where you are or what on earth you’re doing. Where does the pitch start? How do you get across that gigantic bergschrund? Where does it end? Is that anchor solid? Is that ice screw going to hold? Is the buzzing sound I hear my stomach rumbling after that melted KitKat + leftover spaghetti breakfast, or rockfall high above?

My new G14 crampons – a proud recent acquisition – were biting well. But the ice didn’t seem solid. The upper layer was dinner-plating and tumbling with every move, and our double ropes were on the way to being totally clusterfucked.

Like good climbers who knew all the bars in town, we decided to bail in favour of beer. I decided to show Gilles a little trick – how to remove an ice screw after bailing off it. I took out my trusty Russian titanium ice screw. That was the screw I’d actually seen it performed first on, by an instructor in an Indian mountaineering school. This is how it’s done:

1.     Wind in the screw in a good spot. Clear the ice around it first. Make sure the ice is good and hard, and the screw solid.

4.     Wrap the cord around the smooth bit of the ice-screw that’s between the hanger and the threads.

5.     Screw it back in till it’s solid, but the cord is firmly wrapped around this top section of the screw.

6.     There has to be a good tail – about 4 to 5 feet of cord – left loose. Give it a hard tug to see if it starts to unwind the screw. Screw it back in after testing the start.

8.     Clip your rappel biner to the screw hanger and pass the rope through it.

10.   Clip the biner with the cordelette to this knot in the rope.

12.   Once both of you are down, gently pull the correct rope. After 4 or 5 feet – the length of the cordelette – you’ll feel the tension. Give it a good, hard yank. The screw should start to unwind. Keep pulling smoothly after the tug, and the whole affair should fall down.

Did we actually rappel off it this time? Hell no! This is a trick for the all-outta-options bag – you’re 10 pitches up an ice climb, need to get down and don’t have enough gear.

We actually rapped off two Abalakovs we found. Which turned out to be safer than what happened next. While hiking across the glacier back to the cable car station, my partner suggested a shortcut – a quick ‘tourist’ route that ended at the station. About ten hours later, we watched the sun go down from a ten square foot ledge on a rock tower somewhere on a ridge. But that’s another story!

DISCLAIMER: Rock and ice climbing are dangerous sports that can lead to serious injury or death. This site is in no way a replacement for proper training. The Outdoor Journal cannot be held liable for any damage or injuries you may sustain by following any information in this article.

Editor’s note: The term “Russian screwlette” is the author’s invention, and isn’t actually the common name for this technique.