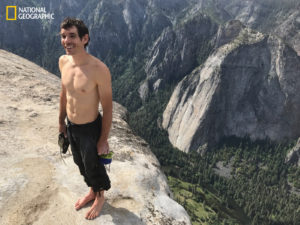 Alex “No Big Deal” Honnold has just completed a climb that is probably the biggest deal the climbing world has ever seen: On Saturday, June 4, at 9:28 am, the 31-year-old topped out the 33 pitch Freerider, becoming the first person ever to free solo a major route on El Capitan.

In a National Geographic interview, Honnold said of free soloing El Capitan, “This has been my biggest life goal for years.”

Freerider’s hardest individual pitch is 5.13a (7c+), but contains numerous other famously insecure and difficult sections, with several in the 5.12 range. The climb, a variation to the free Salathe Wall that avoids the latter’s even harder pitches at the top, was first freed by German brothers Alex and Thomas Huber in 1998.

The 5.13a crux pitch that Honnold climbed is known as the “Boulder Problem” pitch and involves an improbable sequence on a razor-thin hold. Even before getting to that pitch, however, Honnold did battle with wide cracks known as the “Hollow Flake” and the “Monster Offwidth.”

Up on the wall, he was preternaturally calm considering he was adrift in a 3,000-foot tall sea of granite. “Not any real moments of doubt,” Alex said in the National Geographic interview. “The Freeblast [the first section of the route] was still engaging for sure. And the first roof (at the start of the third pitch), I’m always a little bit tense there because you’re just starting up the route.”

In an email to The Outdoor Journal several hours after Honnold’s climb, Maury Birdwell, longtime friend of Alex’s, Executive Director of the Honnold Foundation and TOJ Advisor, wrote, “Just talked to him, he’s so stoked, I’m so relieved (and I think he is too a bit).” Birdwell added, “People will try to understand Alex and what he experienced up there, but ultimately it’s for him and him alone. It was dangerous, risky, and incomprehensible—like all things wild and beautiful.”

“People will be talking about this for as long as we live,” Brad Gobright—an American climber and himself a leading free soloist—told The Outdoor Journal about Honnold’s climb. “I think it’s one of the greatest athletic achievements of all time.”

Honnold had been preparing himself for soloing El Capitan for years. As one of climbing’s biggest unclaimed prizes, the solo became his ultimate climbing aspiration. He pushed himself on big climbs—both roped and unroped—around the world, from the Fitz Traverse in Patagonia to El Sendero Luminoso in Mexico; from the big walls of Morocco’s Taghia Gorge to Mount Kenya and Mount Poi in Kenya.

“All of Honnold’s major solos before this were done almost casually without much rehearsal,” Gobright said. “Barely anyone knew he was planning to do them until they were already done. [His solo of] Freerider has been more than five years of preparation and anticipation by the entire climbing community. I think the headline of this achievement will make it the most publicised rock climb of all time.”

And, of course, Honnold put in dozens of laps on Freerider and Yosemite’s other glacier-polished walls. Yosemite’s granite faces are slick and glassy, just one more detail that makes the prospect of soloing El Capitan so hair-raising. At times, Honnold was padding up near-featureless slabs, trusting his life to the delicate friction created between his rubber soles and the gray-white stone.

Matt Bush, a South African free soloist who himself is no stranger to technical granite slab climbing, told The Outdoor Journal, “This may be the boldest and most daring freesolo ascent of all time. It’s a phenomenal achievement that exemplifies the power of dreams and the human spirit. It’s been inspiring for me to watch Alex’s seemingly impossible feats. He’s taking freesolo to great levels.”

Over the past decade, Honnold has made a name for himself as arguably the greatest free soloist of all time. 2008 was a breakout year for the Sacramento native when he completed the first free solo ascents of the 1,200-foot Moonlight Buttress (5.12+) in Zion, Utah and the 2,000 foot Regular Northwest Face (5.12) of Half Dome in Yosemite Valley, California. He cemented his reputation as the king of Yosemite by becoming the first person to ever complete the Triple Crown—a link up of Yosemite’s three largest walls in—solo in under 24 hours.

His most sustained big-wall free-solo prior to Freerider was in El Potrero Chico, Mexico in 2014, when he climbed El Sendero Luminoso—a 1,600-foot route with 11 pitches of 5.12 climbing and a 5.12d crux pitch.

In 2014 Honnold also completed the first traverse of the entire Fitz Roy skyline with fellow climbing superstar Tommy Caldwell. For that climb, the pair was awarded alpinism’s highest honour, the Piolet D’Or.

Even though he has blown the collective mind of the climbing world, Honnold remains focused on his goals, one of which is to eventually climb a 5.14d (9a) sports route. In the National Geographic interview, he said, “The whole pursuit of this dream has allowed me to live my best life, that makes me hopefully the best version of me. Just because I’ve achieved a dream doesn’t mean that I just give up on the best version of me. I want to be the guy that trains stays fit and motivated. Just because you finish a big route doesn’t mean that you just quit.”

Update: Ted Hesser provided The Outdoor Journal with exclusive shots of Alex Honnold training and working for his foundation, the Honnold Foundation.