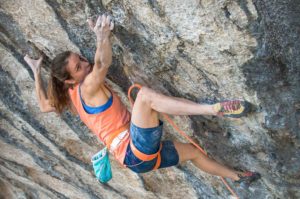 Anak Verhoeven Becomes First Woman to Establish a 9a+

Anak Verhoeven has made history by suggesting the difficult grade of 9a+ for her new route Sweet Neuf in the South of France.

Only one other woman has ever climbed the grade, and none have ever opened a route so hard.

On September 11, 2017, a year that has already seen the first ever confirmed 9a+ (5.15a) female ascent; the first free solo of El Capitan; and the first ever 9c (5.15d), once again crossed into “never before” territory. Anak Verhoeven, a 21-year-old Belgian climber, became the first woman ever to make the first ascent of a 9a+ when she clipped the chains of Sweet Neuf, a 40 meter limestone climb at Pierrot Beach in the Vercors Mountains, in the South of France.

What is new about Verhoeven’s ascent is that she is the first; the trailblazer; the one to deem the route possible. In February, the American Margo Hayes climbed La Rambla in Siurana, Spain, the first repeat of a consensus 9a+ route. (Previously, Ashima Shirashi sent Open Your Mind Direct (9a/+) in 2013,  and Josune Bereziartu sent Bimbaluna in St. Loup, Switzerland, both 9a/+ (5.14d/5.15a).  If further repeats puts consensus at 5.15a, either of those women may in the future lay claim to the first female 5.15a).

Verhoeven’s Sweet Neuf is a link-up between a 15-meter 9a called Sang Neuf, and the final 25-meters of an adjacent 8c/+ (5.14b/c), Home Sweet Home. She told The Outdoor Journal about Sang Neuf, “I tried it last year for about three days, but had to leave because the weather was so bad.

“So I came back this year,” she continued. She put the bouldery 9a to rest in just two days. “In between the second and the third quickdraw there’s one move that was quite hard and a long reach for me,” Verhoeven said. “But the real crux is just before the chains [of Sang Neuf]. It’s a bouldery move where you need a lot of body tension.”

After sending Sang Neuf so quickly, she went project shopping, only to end up in the same place. Sébastien Richard, one of Verhoeven’s climbing partners, suggested the Sang Neuf-Home Sweet Home link-up. It was an extant project that had vexed several local would-be ascentionists.

Instead of stopping at the chains of Sang Neuf after completing that route’s bouldery crux, Verhoeven would climb directly into the final 25 meters of Home Sweet Home above. “That part is mostly about endurance and what makes the whole thing 9a+,” she said. Though this part of the route has some chipped holds, Verhoeven still said, “The climbing is really nice. Some two- and three-finger pockets, some crimps, some long moves that are pretty reachy.”

After rehearsing this new terrain, she sent the new link-up on her first proper redpoint burn, dubbed it Sweet Neuf, and proffered the 9a+ grade.

Verhoeven reasoned that, since previous senders and the guidebook concurred on Sang Neuf’s 9a grade, stacking the end of an 8c/+ atop it—and with only meager rests, to boot—constituted a step up in difficulty. “Even if Sang Neuf is only an easy 9a,” she said, “the next 25 meters make it definitely harder. If the first part is 9a, the whole thing has to be 9a+. I talked about it with other climbers who were there, and they thought it was 9a+.”

Before Sweet Neuf, Verhoeven had already climbed 26 climbs 8b+ or harder.  Aside from Sang Neuf, her other sends of the 9th grade were Era Vella (9a), in Margalef, Spain;  La Reina Mora (8c+/9a), in Siurana, Spain; and Broadway (8c+/9a), also in Siurana.

Though her outdoor climbing achievements are outstanding, Verhoeven is best known for her dominance in competition climbing. In 2016, she competed in all seven IFSC Lead World Cup events of the season, winning at Kranj, Slovenia and Arco, Italy, and placing second at Xiamen, China; Villars, Switzerland; and Chamonix, France. She also won silver at the 2016 IFSC World Championship in Lead, and in 2017 won gold in lead at the European Championship.

For the rest of 2017, Verhoeven said she will mainly focus on training for competitions. But she may just have another (already established) 9a+ in her sights. She said, “I’d love to try Biographie”—also known as Realization, and the world’s first confirmed 9a+, established by American climber Chris Sharma.

And who knows? With 9a+ going down so quickly for Verhoeven, the first female 9b could be just around the corner….