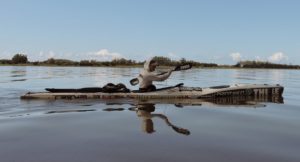 Going in Circles: Freya Hoffmeister and Her Plan to Kayak Around a Continent

Sea kayaker Freya Hoffmeister has made a name for herself by completing successively larger and longer circumnavigations: first Iceland, then Australia, eventually even South America.

Earlier this spring, she upped the ante once again, setting out on her wildest expedition yet.

I have Freya Hoffmeister on the line, and I ask her how she stays motivated on a kayaking expedition like the one she’s on. She says it’s not particularly difficult because it’s precisely what she wants to be doing. “It’ll take a long while to paddle around this island, but that’s the lifestyle I like.”

The thing is the “island” she’s paddling around is a continent, namely North America. And the “long while” will be approximately a decade.

Hoffmeister hails from Germany and is the most accomplished long distance sea kayaker in the world. Over the past decade, she has earned that superlative through a number of circumnavigations. In 2007, she kayaked around Iceland, and separately the South Island of New Zealand; in 2009, she circumnavigated Australia in her boat; from 2011 to 2014 she paddled around the entire circumference of South America; and then in 2016, she kayaked the perimeter of Ireland.

Her circumnavigations have earned her the highest honors a kayaker and extreme athlete can hope to achieve, including the National Geographic Adventurers of the Year award and a World Paddle award.

Deciding to kayak around North America didn’t strike her as a giant leap, just a fairly logical next step. “‘Why not spend the next eight to 10 years going around another island,’ I asked myself,” Freya says. “Half a year on, half a year off. Why not!” The entire circumnavigation will amount to some 50,000 kilometers of paddling. To put that distance in context, consider that crossing the Atlantic requires a comparatively short 7,500 kilometers of paddling. If she succeeds, her circumnavigation will be a first, just as her South American one was.

The plan calls for Hoffmeister to complete the circumnavigation not in one continuous, unbroken stretch of paddling, but in three- to five-month blocks of paddling, separated by three to five months off. Neither will she paddle entirely clockwise or counterclockwise around North America; she will travel two half loops, both starting in Seattle, and finishing in New York.

The reason for this, according to a press release on her website, is that “The northern sections [of the route] are only ice free for a few months per year, so paddling in one direction would extend her circumnavigation by even more years.” She employed the same strategy of paddling in large blocks on her South America circumnavigation.

In late March of this year, Freya left Seattle heading north. One might think that just the specter of a ten year journey would intimidate Freya. But she says that the biggest difference from her shorter expeditions thus far are purely environmental. “It’s colder,” she says, laughing.

And of course there are the bears…. Though she hasn’t seen one yet in camp. “They’ve been friendly so far,” she says. “I’ve got red pepper and black pepper spray in case, so I’ll ask the bear which flavor he wants before I spray him.”

Freya was currently waylaid in Icy Bay Lodge in Icy Bay, Alaska when we spoke on the phone. After resupplying and resting in Yakutat (approximately 130 kilometers east-southeast of Icy Bay Lodge) from June 18 to 21, she was forced to stop in Icy Bay just two days later because of strong winds. “I’m in an exposed stretch for the next 160 kilometers,” she says, “where there’s no sheltered land on the coastline. Straight coastline without any place to hide.” To safely paddle this stretch she will need low winds, and hopefully low seas.

So for now, she’s stuck in Icy Bay for a few more days. But in a ten year expedition,  there’s no point in rushing. Just like Paul Salopek and his decade-long Out of Eden Walk, Freya says things are too beautiful to be purely concerned with speed. She generally covers 40 to 50 kilometers per day and camps on beaches and other sheltered spots on the coastline most nights.

Freya doesn’t concern herself with planning too far ahead either, and isn’t thinking about future three- to five-month blocks of the expedition until this one is finished (which will be at the end of August). With a project of this scale, it’s prudent to approach it in bite size chunks, she says: “You can eat an elephant—just cut it into small pieces and it works.

And looking forward at what’s coming up next is the way Hoffmeister approaches life in general. Just because she has already accomplished so much, completed routes no one is likely to repeat for a long time, and reached the pinnacle of her chosen sport, doesn’t mean she is going to hang up her paddle. At 53, her mantra-cum-slogan is “Never stop starting. Never start stopping.”

“I’m not as young anymore,” she says nonchalantly. “But I still love what I’m doing. Everyone should do whatever they love to do. Don’t stop.”

“Other people climb mountains,” Freya continues. “Then inevitably others do more complicated routes on other mountains. That’s exactly what I’m doing with my paddling. Just horizontal.

If you enjoyed this feature, you might like this story on circumnavigating Wales via stand up paddleboard.