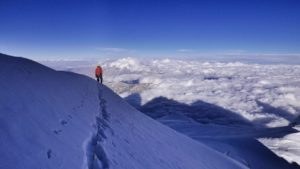 Light and fast was the name of the game in the Himalayas this season.

Killian Jornet blazed up Everest—twice—but an ascent that received less acclaim was similarly impressive: In mid-May David Göttler and Hervé Barmasse virtually sprinted up the Southwest Face of Shishapangma in just 13 hours.

When German climber David Göttler learned of his good friend Ueli Steck’s death, he was gutted. “It was a very hard moment for me,” he says, “especially being on Shishapangma. That place…”

Göttler was at the mountain to try and forge a new line up the imposing Southwest Face. The expedition was inextricably tied to Steck: One year prior, in 2016, Göttler and Steck had traveled together to Shishapangma to attempt the same objective. Now Göttler was back, and Ueli was gone.

Shishapangma (8,027 meters) is widely considered one of the easiest 8,000 meter peaks to climb. The Normal Route follows the Northwest Face to the North Ridge. But on the other side of the mountain the 2,000 meter Southwest Face rises menacingly out of the glacier below, steep and narrow couloirs splitting the otherwise rocky face. While a handful of established routes criss-cross the Southern aspect, it is an infrequently attempted face in the Himalaya. “It is really remote and really lonely,” Göttler says. “So it’s really nice.”

In 2016, Göttler and Steck hoped to climb a new, technical route up the Face in alpine style. Their plans were thwarted by “unstable weather.” Instead, they decided to try a super-fast, super-light ascent of the Southwest Face in a single day. Again, their plans did not work out.

But Göttler spent the next year fixated on Shishapangma. Steck was already formulating his own plans for a traverse of Everest and Lhotse, though. So, with Steck’s blessing, Göttler recruited a new partner: Italian climber Hervé Barmasse. While Barmasse had never attempted an 8,000 meter peak (Göttler had already summited five other 8000ers: Broad Peak, Gasherbrum II, Dhaulagiri, Makalu and Lhotse), he was a highly experienced and talented alpinist with dozens of climbs in the Alps, Patagonia and Pakistan.

The plan for 2017 was the same: climb a new route on the Southwest Face. “For an alpinist to have an idea of a new route and the possibility to climb it is one of the best things that can happen,” Göttler says.

For the second year in a row, however, the weather was uncooperative. “We needed a solid three-day window,” Göttler says, and there was constantly new snow. “Five centimeters of fresh snow on a 2,000 meter vertical face—immediately there are avalanches and spindrift that you can’t handle. For the Normal Route on the other side, its nothing. But for us, it was too dangerous.”

Dismayed over a second year without good weather, Göttler got word from Dr. Karl Gabl, a meteorologist in Innsbruck (“The guru of Himalayan weather,” Göttler says) that there would be a short, 24-hour window of good weather and low winds on May 21.

Göttler had already had some time to start processing Ueli’s death on Nuptse. Steck died on April 30, and Göttler “found out about an hour or two after.” He says, “We had a lot of future plans together as well. It was really a tough time.”

Göttler and Barmasse made the same decision that the former and Steck had the year prior. Göttler says, “We decided that we should still do something even if we couldn’t do the new route. We decided we should live the vision of what Ueli had taught me last year. And how I had now taught Hervé. We would try to climb the Face [up an established route] in a super light style in a single day, and see how far we could get.”

They settled on a line called the Girona Route. It ascends the face up to a col at about 7,400 meters, then follows a long ridge to a higher plateau, and finally crosses the plateau to Shishapangma’s true summit.

The pair started at 4:45 in the morning from the bergschrund (roughly 5,900 meters), carrying only a stove, food, a single sleeping bag, and a bivy tent.

The Girona Route, while never overly technical, has its cruxes for sure. “There’s this one couloir with black ice, and if you fall there, it’s a long way down,” Göttler says. “There are high consequences if you make a mistake.”  They carried a 25 meter, 6 millimeter kevlar rope for navigating crevasses, but otherwise moved unroped.

When they reached 7,400 meters, they stashed their tent and sleeping bag and kicked it into high gear. At 6 pm in the evening, 13 hours after they left the bergschrund, perched on the summit ridge, the true summit was just five meters above them. And that’s where they stopped.

Climbing the last five meters would have entailed surmounting wind-blown, avalanche-prone drifts of snow. The north side of the ridge had precarious cornices balanced over a huge vertical drop.  Neither climber was prohibitively tired, nor was the climbing required in those final five meters particularly difficult. But they made a calculated decision.

Alpinism is full of stories of climbers exercising poor judgment, impaired by altitude illness or just sheer bravado; but it is also full of stories of climbers showing uncommon judgment, pushing themselves to the limit and turning back at the last possible second.  Jimmy Chin wrote of his, Conrad Anker, and Renan Ozturk’s failed 2008 attempt of Meru’s Shark Fin in India’s Garhwal Himalaya in The Outdoor Journal’s first issue, a prime example of toeing the line: “Despite weathering a weeklong storm low on the route and rationing eight days of food into 19, we pushed to within two pitches of the summit. We could see it but it felt far away. To push on would have required us to spend the night out, but we knew in our current state we wouldn’t make it. We felt shattered, physically and emotionally, as we rappelled through the night to our hanging high camp.”

Barmasse and Göttler’s decision to stop just five meters short of Shishapangma’s summit was the ultimate show of reverence for the mountain and a display of complete mastery of their art. “Some people might say ‘You didn’t summit after climbing more than 2,000 vertical meters in 13 hours?,’” says Göttler, “But for us, it’s ok. We can live with it. It was just as good as being on top.”

From the vantage point just below the top, they enjoyed a crisp view into Tibet, the clouds far below them. After taking in the moment and thinking of their friend Ueli, they climbed back down to their stash at 7,400 meters and spent a chilly night on the mountain before downclimbing the rest of the route the following morning.

Göttler says that his and Barmasse’s climb of Shishapangma’s Southwest Face was an exercise in seeing what they were capable of. While not a speed record—Steck soloed the Southwest Face in a superhuman 10.5 hours in 2011—that’s not what they were aiming for. Göttler explains, “To know that we are able to climb a 2,000 meter face up an 8,000 meter peak in one day—it opens up more possibilities and dreams and future goals.”

Just as Killian Jornet’s recent speed ascents of Everest were in many ways an outgrowth of the style he learned from Ueli, Göttler and Barmasse’s climb was an homage to their late Swiss mentor. “Ueli would have loved it: to be there, to see us, seeing how we climb in his style. He was really motivated for others and us, too. He was always interested in seeing what people could achieve.”

“I’m pretty sure that Ueli’s smiling up there and clapping for us,” Göttler says. “It’s a good feeling.”

Feature Image: Hervé Barmasse with the Tibetan plateau behind him. Photo: David Göttler.