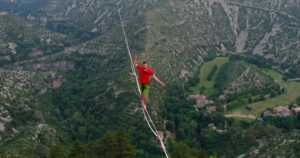 Three members of a French slacklining team made history two weeks ago.

Balanced on a narrow piece of webbing 300 meters high, they set a new world record for the longest ever highline, suspended in the sky as they inched their way along for 1,662 meters.

On June 9 and June 10, members of the French Slacklining Team, Sangle Dessus-Dessous (SDD), completed a longer highline than anyone ever before. Nathan Paulin, Pablo Signoret, Lucas Milliard and Antony Newton all took turns attempting a 1,662 meter long highline in France’s Cirque de Navacelles, near Montpellier.

Slacklining has advanced by leaps and bounds from its humble origins as a campsite pastime, pushed in new directions by visionary-maniacs like ‘Sketchy’ Andy Lewis and Spencer Seabrooke. But setting up the world’s longest slackline wasn’t something SDD concocted the week before and threw together on a whim; executing a highline of this magnitude took nearly two years of organization and planning.

Antony Newton, one of the team members who attempted the highline, says that a group of entrepreneurs from near Montpellier helped finance the world record event, while SDD’s president, Guillaume Barrande, was instrumental in organizing it. The entrepreneurs knew of SDD mainly through team member Nathan Paulin, who had already set previous world records for the longest highline prior to Cirque de Navacelles, walking a 470 meter long highline at Réunion Island in June 2015, and later a 1,020 meter highline in Aiglun in April 2016.

The original plan called for a 1.4 kilometer line, but then the team got wind of another highliner who was going to attempt a 1.6 kilometer highline. Not to be outdone, SDD went bigger, and settled on the spot in Cirque de Navacelles that would result in their 1,662 meter walks.

Walking a slackline of that length is mind-bendingly difficult. “You end up walking in a different direction at the end of the line then at the beginning,” due to the sway over such a long distance, Newton says. Furthermore, at 300 meters above the ground, the only point of reference you have is the webbing directly in front of you.

“You know you’re going for a very long walk,” he continues, “and in the beginning you’re not hot, you feel ready, and you take the first 400 meters pretty quickly. Just warming up. But then it gets tricky. Your legs start to tremble around 400 meters from each end. Those are the hardest parts, lots of play in the line.”

From June 5-8, the team set about rigging the line from one side of the valley to the other and then tensioning it and adjusting it until it was completely flat. The Frenchmen went over their safety and rescue protocols with the Highline Rescue Experience (HRE), one of their partners on the project. During every attempt, HRE had three rescuers positioned at different spots who could assist the SDD team members anywhere on the line. The SDD athletes were all wearing harnesses with leashes attached to the line.

Newton says, “Safety came before everything else. We thought about every possible problem and situation—we prepared for everything.”

On June 9, Pablo Signoret took the first steps onto the line. And on his first go, he pulled it off in just 1 hour 13 minutes. Nathan Paulin went after Signoret, and he too walked the line on his first try in roughly 1 hour 15 minutes.

That the Frenchmen were able to walk the line on their first attempts is a testament to their skill. “During the day when the wind was up, the line would go side to side about 50-60 meters probably,” Newton says. “The sag of the line itself was probably 70 meters or so”—which means, in the middle, each highliner was 70 meters below the anchors on either end.

The next day it was Lucas Milliard and Antony Newton’s turns. “It was super hot,” Newton recalls. Newton fell on his first attempt after some 500 meters. The pair decided to wait out the heat of the day for better conditions. Milliard managed to cross later in the evening, recording the fastest time of the group, making it to the other side in just 1 hour 6 minutes.

Newton tried once more as well.  He felt much better on his second try, the heat and humidity of midday now dissipated. “In the middle I was just cruising,” he says. “ You feel like you can go to the end at that point. I count my steps, personally. I start at one and go to 100, and then restart. As soon as I start thinking of other things I tell myself, ‘No, concentrate.’”

But towards the end, his concentration slipped. “Suddenly I was falling,” he says. Newton made it 1,510 meters before losing his balance—just 152 meters from the end. But he’s not too torn up about it: “My last record was only about 800 meters. So I doubled that.”

The relative speed and ease with which Paulin, Milliard and Signoret achieved their new world record opens up countless possibilities for long highlines. Just three years ago, Paulin set a world record that was less than a third as long as their new one. Who will challenge the new benchmark next (perhaps themselves?) is anyone’s guess, but it’s safe to say that it won’t stand indefinitely.

Feature Image: Nathan Paulin on his way to setting a new world record for the longest highline ever. Photo: Frédéric Marie.